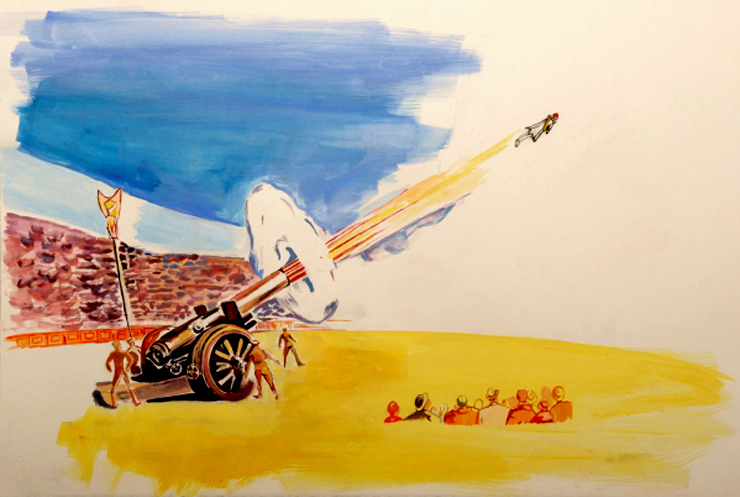 Clown Soldier is an explosion of absurdity wheatpasted onto a wall near you. Plunging into the outer depths of the concrete jungle, firing a juxtaposition of images and landing in the urban street art scene. The incongruity inside the images reflects the incongruity outside the images: art in and of the urban landscape.  The artist is interested in chance and the role chance plays in his work.  Cut up and re-appropriation is the ever-present theme.  His style is both easily recognizable and beyond the purview of recognizable narrative.

Formally trained in the arts, Clown Soldier brings to the streets an approach devoid of any specific political message or agenda and simply leaves the viewer to take away what they will from what they see.

We will be hosting an event on Friday June 24 from 7-11pm for Clown Soldier: ‘The Human Cannon Ball’ at Pawn Works; Artist will in attendance.

BSA Film Friday: 02.16.18
Our weekly focus on the moving image and art in the streets. And other oddities. Now screening : 1. "The Clown" Harmen De Hoop 2. Artist's Artist: The Process of Gary Lichtenstein 3. FinDAC: "...
BSA Images Of The Week: 02.14.16
It's a February pile-on this week with dangerous sub-zero wind chills on the street, Valentine's Day smashing into Presidents Day, a Brooklyn Jew winning the New Hampshire primary against a former...
Guido Van Helten, Mr. Estes, and Changing "The Nations" in Nashville
The great irony of painting a mural about the evils of gentrification is that you may indirectly aid gentrification in the process. Guido Van Helten for Nashville Walls Project. Nashville, TN. June...
Joe Caslin in Dublin and On a Castle for Same-Sex Marriage
Irish illustrator Joe Caslin has just completed a two-mural campaign this spring in Dublin’s city center on the side of a castle in Co Galway in support of this May’s country-wide same-sex marriage re...
Preparing for Museum Show at ONO'U Tahiti 2017, Dispatch 4
This week BSA takes you to the French Polynesian Islands to see the new murals going up for this tropical island cultural festival called ONO'U Tahiti 2017. We're happy to bring you the daily events...
Brooklyn Street Art Chicago Clown Soldier ILL Pawn Works Gallery