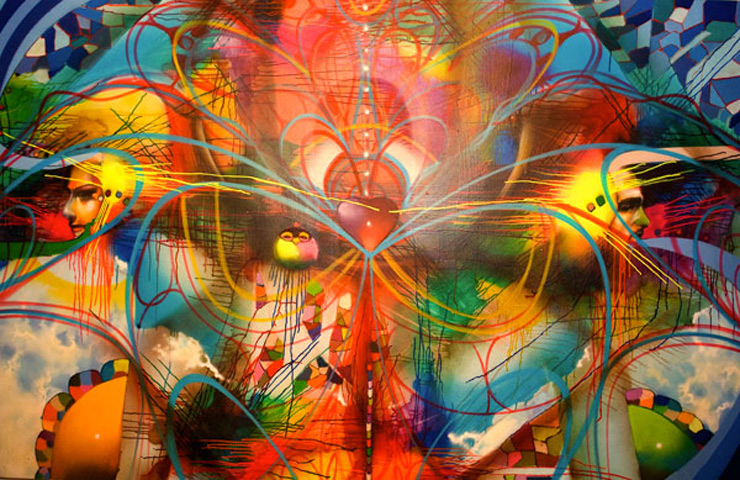 This Aint No Place For No Hero

Who exactly is Chor Boogie?

The intentions behind his art work are to create timeless dynamic moments of Imagination, Creativity, Originality, Meaning, Style, Self Expression, Audience, Taste, and the Visual Elements of Line, Light, Composition, Form, Space, and Color. It is derived from the colors of his soul. It is a therapeutic flow of colors, shapes, and movements combined in to one. A movement of images that has adapted to space giving it the significance of belonging to its surface, coming together as one and forming images of creation. Expressing realms of colors that give a healing sense and encourages you to wake up.

We are located in the alley directly accross the street from Matchbox on 8th Street, SE.

We are 2 blocks from the Eastern Market Orange and Blue Line Metro.

We reccommend Parking in the lot directly under the Southeast Freeway at 8th and I Street, SE.

Fabio Petani Combines Art, Nature, Chemistry in Naples
O sciore cchiù felice (the happiest flower)  “The happiest flower is the one that is able to have a secure foundation, to receive joy and nourishment.” We paraphrase the Italian muralist Fabio Petani...
Don Rimx “Olor a Azucenas el Perfume del Barrio” in Brooklyn
“Olor a Azucenas el Perfume del Barrio” (The smell of Lilies is the Perfume of the Neighborhood) is the new mural by Don Rimx for this Brooklyn wall on Grand Street. Don Rimx. “Olor a Azucenas el...
BSA X ONO'U Festival 5 : Day 2 / Pixel Pancho In Papeete
This week BSA is checking out French Polynesia to get an appreciation for the Street Art, graffiti and street scene here while the 5th Annual ONO’U is taking place. Join in the tropical action while w...
"Face Time" with Various & Gould in Berlin
80 meters from the former Berlin Wall in an area still straddling "former east" and "former west" in Berliners' minds, Street Art duo Various and Gould have just spent 12 days on “Face Time”, a patchw...
3 Library Rats from XAV for Contorno Urbano 12 + 1
"I was a library rat. Libraries are the mainstays of democracy. The first thing dictators do when taking over a country is close all the libraries, because libraries are full of ideas and differences ...
Brooklyn Street Art Chor Boogie DC The Fridge Gallery DC Washington