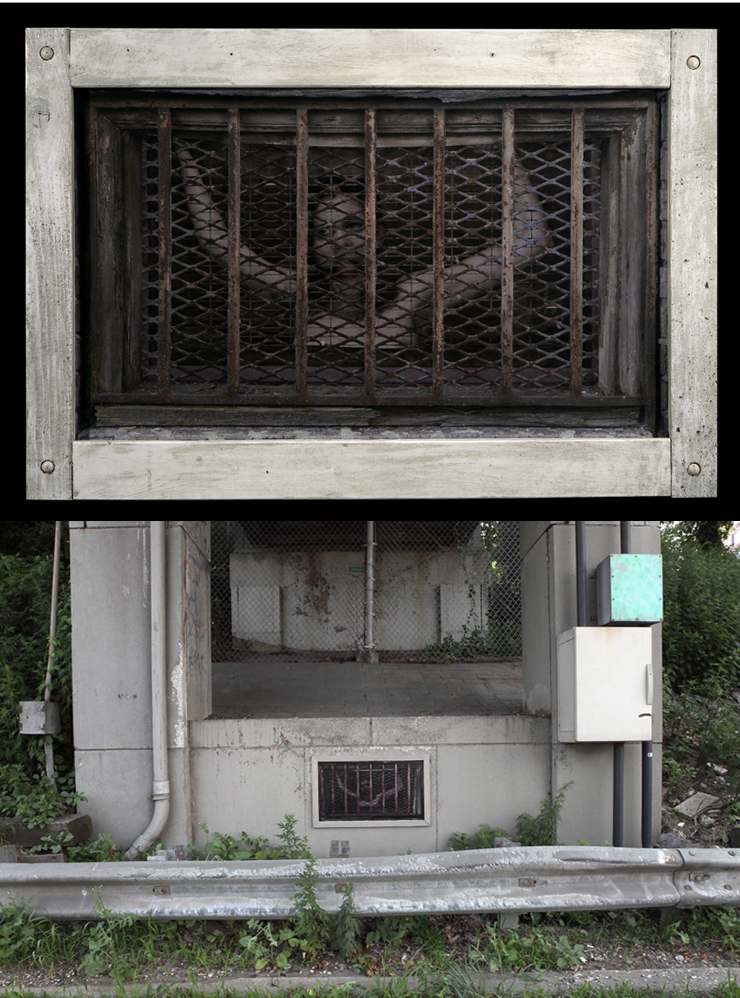 SAN FRANCISCO, CA- October 24, 2010 –White Walls is pleased to present What The %$#@? (WTF), an exhibition by prolific Brooklyn-based artist, Dan Witz. The WTF exhibition will be showcasing the artist’s Dark Doings series, both inside the gallery as well as on the streets of San Francisco. Witz is known for using his mastery of the visual deception of trompe-l’oeil and photorealistic painting techniques to create conceptual visual pranks, producing a definitive and unparalleled street art practice. The artist’s debut San Francisco solo show will be comprised of approximately 30 mixed and digital media works in custom framing hand-created by the artist. The opening reception for What The %$#@? (WTF) will be held at White Walls on January 08, 2011 from 7-11 PM. The exhibit will be on display through February 05, 2011 and is free and open to the public.

Dan Witz’s integrity in expressing beauty through subversion and an enduring interest in realism has sustained the artist a copious 30-year career. Known for his hyper-realistic paintings, Witz challenges himself to keep representational painting relevant in the postmodern era and digital age. This challenge commands that the artist must continually grow and experiment in his art practice which has contributed to him being cited as one of the most progressive and influential painters of our time. Witz’s paintings are meticulous studies of light and it is through these subtleties of light that a sense of spatial dimension takes form. The presence of light becomes more delicate as it illuminates Witz’s subjects of quiet nightscapes and interiors and in stark contrast to his scenes of ominous mosh pits and animal frenzies. The artist’s career as a classical painter has risen while simultaneously championing an original take on street art. His street pieces surpass mere visual messages; rather they are witty puns and conceptual pranks that he integrates into urban environments. A master of the visual deception of trompe-l’oeil, Witz ironically provokes his viewers by placing shockingly unnoticeable art on city walls.

I’m trying to exploit our collective tendency towards sleepwalking by inserting outrageous things right out there in plain view that are also practically invisible. My goal is to make obvious in your face art that 99% of the people who walk by won’t notice. Eventually when they stumble upon one or find out about it I’m hoping they’ll start wondering what else they’ve been missing.

The What The %$#@? (WTF) series is named for the universal reactions it often inspires within the viewer. For this street art project, Witz is installing his Dark Doings pieces on walls beside highway ramps and interchanges–bottleneck locations where traffic backs up and a captive audience develops as cars pass by at low speeds. Dark Doings is made up of digital photo prints with extensive over-painting mounted on plastic and then framed. For each piece that Witz will be showing within the gallery, a corresponding piece will be put up somewhere in the Bay Area. The artworks come in an edition of 6:3 for the street and 3 for other distribution. The street versions are unsigned, but marked with NFFS*. The asterisk indicates (on the back of the piece) *NOT FOR FUCKING SALE.

Dan Witz is an artist living and working in Brooklyn, NY and has been active as both a street and realist artist since the late 1970’s. He received his BFA from Cooper Union (1981) was awarded a National Endowment of the Arts grant (1983) as well as a fellowships from the New York Foundation of the Arts (1992 and 2000). Witz has shown nationally with Jonathan LeVine Gallery, Carmichael Gallery, DFN Gallery and internationally with Stolen Space Gallery and Addict Galley. The artist has been featured in several notable publications such as New York Magazine, Public Art Review, The New York Times, The Daily News, Newsday, The New Yorker, Harpers, and Adbusters. His first book, The Birds of Manhattan was published by Skinny Books in 1983. His second book, In Plain View, as well as a calendar, Hummingbirds, 2011, were released in 2010 by Gingko Press.

About White Walls:
White Walls Gallery is the premiere destination for Urban Contemporary art. Residing next door to its sister galleries, the Shooting Gallery, Gallery Three and 941Geary, this 4,000 sq ft space is one of the largest art galleries on the West Coast. Justin Giarla founded the gallery in 2005 with a commitment to furthering the Urban Art movement that stems from Street Art and Graffiti as well as support both established and emerging artists within the genre.

Alex Senna: "Fronteiras" Teaser
A quick heads up for a new video with Brazilian street artist and muralist Alex Senna and contemporary Brazilian poet Marcelo Ariel that will debut on November 25th. Any time street art collaborates...
BSA Images Of The Week: 06.28.15
Yo sis the joint was rockin this week in the USA with public healthcare snatched from the jaws of defeat, Same Sex Marriage approved by the Supreme Court coast to coast, and Obama singing Amazin...
On the Shoulders of a Wizard : Os Gemeos and Mark Bode In SF
We continue our San Francisco street diaries with BSA contributing photographer Brock Brake and a mural from Os Gemeos and Mark Bodé, who together include a glorious technicolor tribute to Cheech Wiza...
SpY: "Earth / Tierra" at Plaza de Colón in Madrid
SpY describes his new public art project “Earth,” as “a luminous red sphere caged inside a structure.” You may wonder what this structure made from building-site scaffolding represents, especially wh...
BSA Film Friday: 06.12.15
Our weekly focus on the moving image and art in the streets. And other oddities. Now screening : 1. Born and Bred: The Rise of Street Art in Bushwick 2. Collettivo FX and Their Enormous Wall ...
Brooklyn Street Art CA Dan Witz San Francisco White Walls Gallery