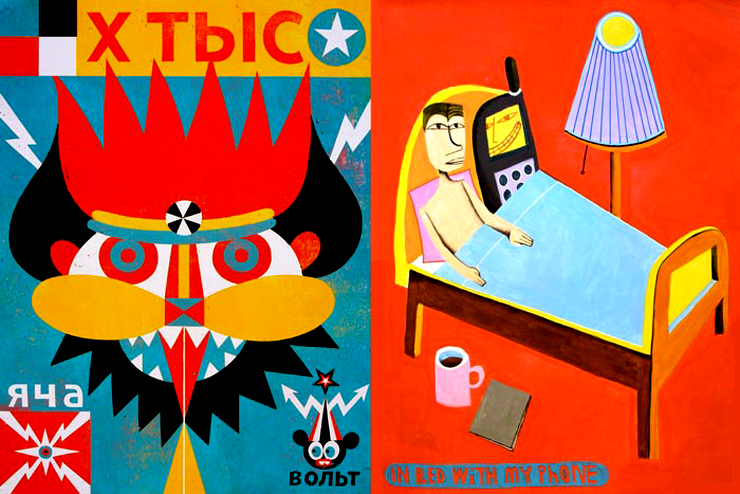 Join Factory Fresh on December 10th as we welcome artists Roman Klonek and Jim Avignon and their unusual breed of pop art for their show Speedy Wonderland.

Roman Klonek is a Polish artist who creates figures from woodprints, composed of vibrant colors and seeming to be in constant motion. Influenced by old cartoons from Eastern Europe, Klonek’s figures have a vintage, wide-eyed feel to them, but his predilection for juxtaposing his happy characters against awkward situations (including but not limited to: injuries, arrests, infiltration by monsters) reminds you that his work lives far from the pages of the Sunday morning comics.

Jim Avignon, a German pop artist, designer and musician who creates similarly disarming work with a cartoon feel. Avignon currently calls both Williamsburg and Germany home, and began his career as an artist painting the walls of clubs in places like Munich and Berlin. As a result of this heritage, his work is inherently urban- his figures are crowded and sometimes exhausted, but always lively and surprising, lurking in and wandering around the canvas. If Avignon’s work were a show on the Cartoon Network, it wouldn’t be the one you wanted your children to see but the one you yourself were enthralled by, following the tired eyes and furrowed expressions of animations that stray far from realism yet furrow their brow in an uncannily familiar manner. His work is a garish caricature of the self that’s hard to keep your eyes off of- it’s no wonder his designs have appeared everywhere from Swatches and sweatshirts to the tails of airplanes.

Klonek and Avignon will be collaborating on some pieces but working mostly separately.

The show opens December 10th at 7 pm, and runs until January 16th. Don’t miss it. 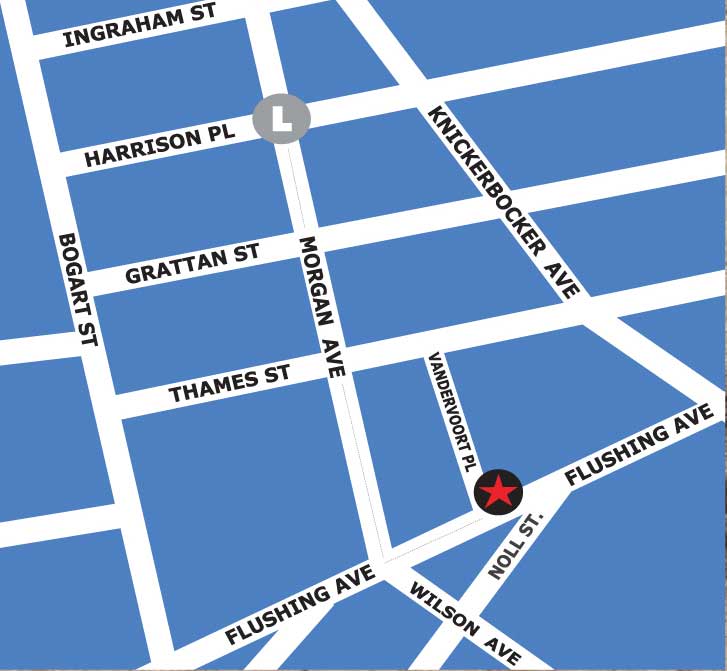 Jumping Salmon! Louis Masai is in Sacramento. "The Art Of Beeing" Tour
Sacramento is next on the list for Louis Masai and his “Art of Beeing” US Autumn 2016 tour. And something smells fishy. Louis Masai The Art Of Beeing. Coho Salmon. Endangered. Sacramento, Califor...
Nevercrew Reifies on "One Wall" in Berlin
Nevercrew is unifying in Berlin with their new “One Wall” project with Urban Nation. The immense marine mammals depicted are not typical in their upright position in this reflective scene. Are they fl...
BSA Images Of The Week: 05.03.20 / Dispatch From Isolation # 42
The Majority of lawmakers in Congress are millionaires. Nancy Pelosi? She's worth $115 million. Mitch McConnell? $34 million – his wife Elaine Chow has $30 million. Republicans or Democrats...
14 From 2014: Rosanna Bach
Happy Holidays to all of you charming and sparkling BSA readers! It’s been a raucous sleigh ride with you and we thank everyone most sincerely for your support and participation this year. A sort o...
Peeta Goes Mono on a 3D Piece in Gainesville, Florida
“I went back to monochromatic pieces after a long time,” says Street Artist Peeta about his new anamorphic mural in Gainseville, Florida. His ability to master the optical illusion of three dimensions...
Brooklyn Street Art Factory Fresh Gallery Jim Avignon Roman Klonek