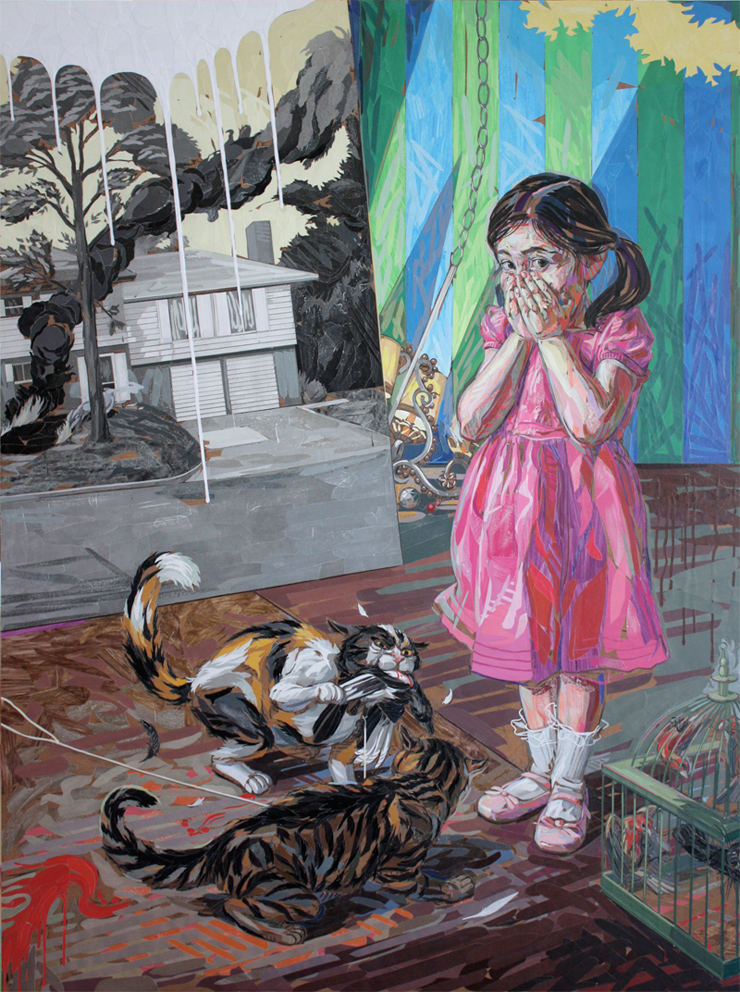 “After Goya” Brian Adam Douglas. Photo © Courtesy of the Artist

For my first solo show in the UK, Due Date, I am exploring my preconceived notions of parenthood and the opportunities for growth that come through that process. I am presenting a series of narratives that flirt the line between fact and fiction; they are moments of autobiography that have been extrapolated to become allegories. As an artist in the process of trying to become a parent and living in one of the most parent-centric sections of NYC, I am keenly aware of the mania that strikes at the heart of parents young and old. In these paintings I am addressing fears (loss of individuation as well as of the proverbial unknown), the strengthening of bonds in times of crisis, the issues of trying to become a parent later in life and the wisdom gained through the process of parenting.

The current body of work builds upon a process of art making that I have been refining for several years. I refer to the work as paper paintings rather than as collage. I see each piece of paper as a brushstroke rather than as a juxtaposed idea. Each brushstroke is selected for it’s color, value and texture, rather than it’s imagery.

Images of the Week 01.17.10
Our weekly interview with the streets JC2 has taken the image originally wheat-pasted and turned it into a sign post.  Don't recall seeing something this large bolted before, do you? (...
Tristan Eaton "Intermission" Video Debuts
Tristan Eaton completed his turn at the famed Houston/Bowery Wall in Manhattan back in July...he wanted an Intermission from the noise, the bad news, the stress, the BS and the haters, he says. So he...
Miss Van: Wishes And Hopes For 2018
As we draw closer to the new year we’ve asked a very special guest every day to take a moment to reflect on 2017 and to tell us about one photograph that best captures the year for them. It’s ...
Gonzalo Borondo: "Hereditas" Installation in His Childhood Segovia
A site-specific immersive exhibition by the artist at Museum of Contemporary Art Esteban Vicente From April 8 to September 26, 2021 Style and genre, and era have never been particularly magnet...
A Grand Spring 2021 : NYC Beckons You to Public Space and Museums
A year ago NYC went into complete lockdown. Spring went on without us. Holed up in our homes we missed the burst of new life such as the myriad of flowering trees of New York, pear trees, peach trees...
Brian Adam Douglas Brooklyn Street Art Elbow-Toe U.K. Warrington Warrington Museum