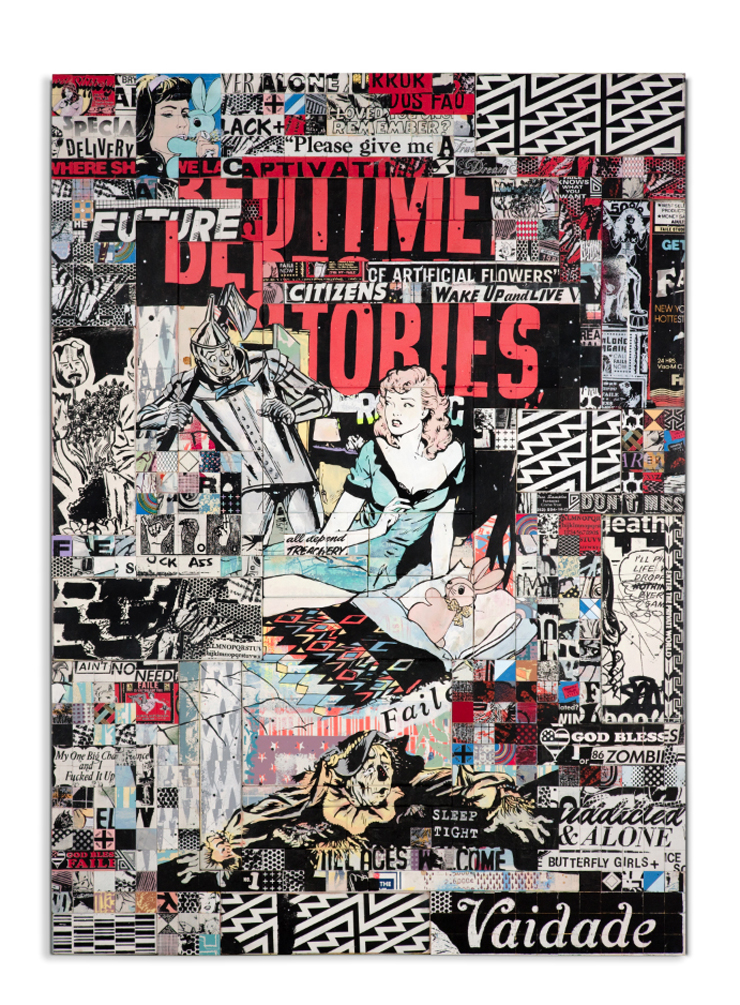 Following on the heels of two major projects—the interactive arcade of Deluxx Fluxx and the haunting, allegorical suite, Lost in Glimmering Shadows—Bedtime Stories is a return to fundamentals that pushes questions of form and process to the forefront. Each of the twelve works’ compositions are assembled from numerous painted wooden blocks and they emerge as unified paintings. They reveal FAILE’s relentless assimilation and refinement of the vast visual vocabularies of both the urban environment and their own decade-long practice. The grids of these paintings are at once modular and fixed, tactile and graphic. On their surfaces, iconoclastic characters fluidly intermingle with adroit deconstructions of commodity culture. The re-combinations of carefully constructed texts and images provide a glimpse into FAILE’s rigorous and organic process, and draw attention to painting’s inherent materiality.

Works such as Addicted & Alone and Faile Launch reshape painterly traditions of pointillism and the affichistes, while simultaneously suggesting newer media that draws on the pixelation of digital technology and the improvisational roots of collage and street art. Bedtime Stories presents works of a neo-baroque ilk yet they are aggressively beautiful while underscoring FAILE’s continued exploration of formal and aesthetic inquiry and evolution.

Images Of The Week 02.06.11
Our weekly interview with the Street, this week featuring Alec, Kamineko, NohJColey, Oculo, Pawz, and Vie3
Bastardilla in Love With Bees and the Taste of Summer in Stornara, Italy
Before there were drones, there were bees. They are far more sophisticated still when it comes to their subtleties of collecting pollen on their furry bodies, flying on translucent panels through the...
BSA Film Friday: 08.21.20
Our weekly focus on the moving image and art in the streets. And other oddities. Now screening : 1. Indecline "The Art of Protest" Trailer BSA Special Feature: Indecline "The Art of Protes...
ASHOP CREW In Sacramento, via Jim Prigoff
Montreal’s ASHOP crew is a complete team of talented writers and painters who can handle the commercial jobs – but when it comes to having fun they just want to hit the wall with their own stuff for ...
"Desordes Creativas" and Creative Desserts in the North of Spain
What’s for dessert? You may think of public mural festivals as the final dish that is pleasing to the eye and sweet beyond belief. DESORDES CREATIVAS (Creative Desserts) is a festival of urban art in...
Brooklyn Street Art Faile new york New York City Perry Rubenstein Gallery