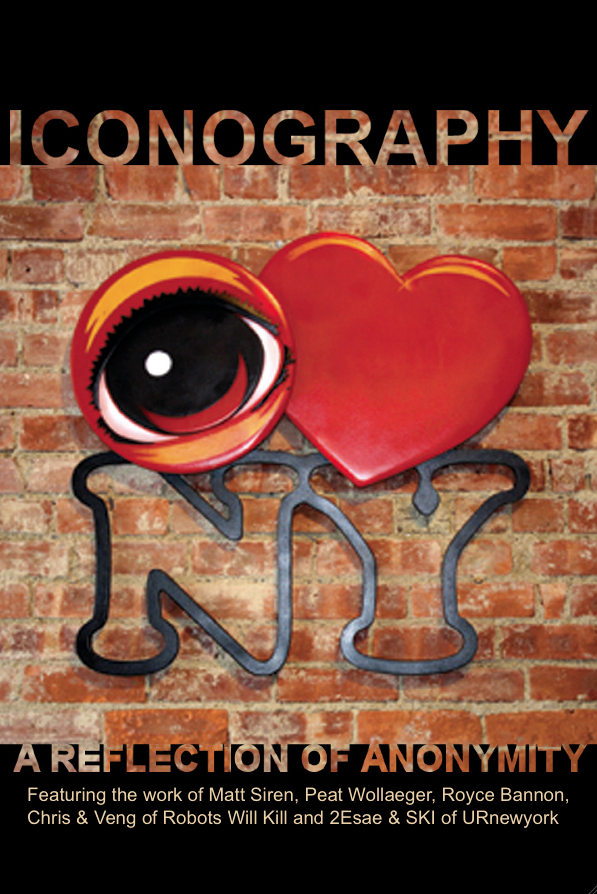 New York City is rich with colors, sounds, textures, personal exchanges and human interactions, a scene constantly in motion. Through the busy veil of urban lifestyles is an artistic detail that binds the city together. Mighty Tanaka is excited to present: Iconography, A Reflection of Anonymity. Featuring the artwork of Matt Siren, Peat Wollaeger (stenSOUL), Royce Bannon, Chris and Veng of Robots Will Kill and 2Esae and SKI of URnewyork, they represent an accurate cross section of the street art one finds in NYC and beyond.

Each artist demonstrates their own personal blend of techniques and styles as they have developed a highly personalized means of branding their work, and ultimately, themselves. The icons they choose to place on the streets hold an individualized significance, a means of projecting self onto a surface interpreted by the general public. Their work represents a generation’s visionary artistic approach to the urban landscape.

Through a variety of methods including wheat paste, screen print, spray paint, stencils and more, their chosen techniques encompass a broad spectrum of what one encounters on the streets today. However, it is the integrity of the iconic imagery that translates the rawness of the streets into the refinement of the gallery setting.

Elfo says "Elite: R.I.P. in 2020" on Walls of Verona
“The reports of my death are greatly exaggerated.” That’s the text of a cable sent by the writer Mark Twain from London to the press in the United States after his obituary had been mistakenly pu...
Images Of The Week: 03.23.14
Here's our weekly interview with the street, this week featuring Aine, APC, Bast, Billi Kid, Dain, David Shillinglaw, Dee Dee, Dennis McNett, Droid, Enzo & Nio, Kaws, Li-Hill, Seazk, Stikman...
Xav Paints New Mural In Kiev and Meets Racist Resistance
Spanish tattoo artist and muralist Javier Robledo aka Xav brought an enormous joyful boy to Kiev in Ukraine this summer, his largest mural ever at 70 meters high by 15 meters wide. He was pleased by h...
St+ART India 2016: Niels "Shoe" Meulman, Reko Rennie, Anpu Varkey & Chifumi
Amsterdam based designer, artist, calligrafitti writer Niels Shoe Meulman appears to have had an excellent time in all the photos we’ve been seeing from his time in India. Tagging since the turn of th...
Skount "To Be Or Not To Be", Sarah Bernhardt & James Lafayette
Skount is debating whether to be or not in this adaptation of a hundred plus year old photo of Sarah Bernhardt, who holds the court jester Yorick’s skull in hand. A grave contemplation of suicide that...
2Esae Brooklyn Street Art Chris RWK Matt Siren Mighty Tanaka Gallery Peat Wollaeger Royce Bannon Ski Stensoul URNewyork Veng RWK