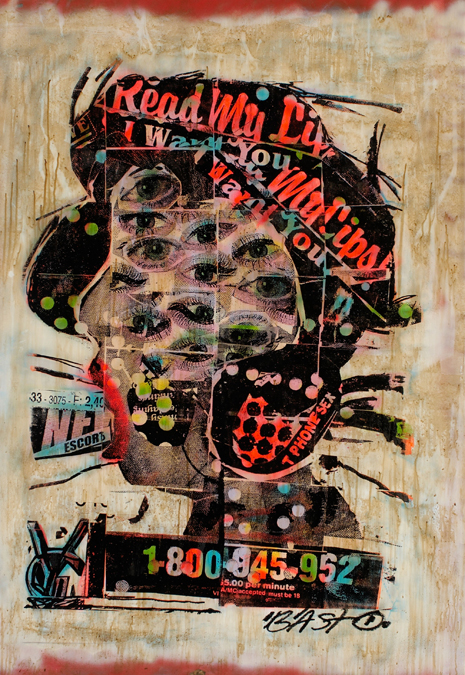 Bast "Read My Lips" Image Courtesy of the Gallery

Lazarides is delighted to announce Botulism, the first solo exhibition of Brooklyn’s infamous collagist Bäst at the Rathbone Gallery. Bäst will present a collection of new works, developing past preoccupations in an exciting new direction.

Bäst’s work is inspired by the early punk flyers of London and New York, playing with a variety of 21st Century icons and appropriating imagery from a variety of media. From advertising to comic book characters, Bäst subverts the familiar and recognisable into distorted counterparts. His collages, wheat-pasted posters and paintings morph Mickey Mouse, Pinocchio and Papa Smurf into multi-eyed sexually charged portraits of their former selves. Food packaging, 50’s newspaper clippings and brand logo’s all feature as the backdrop to his vibrant, brilliantly coloured works.

Whether appearing in the doorways of downtown New York or on the walls of a gallery, Bäst’s graphic language translates into prints, paintings, collages and mixed media sculptures. His latest acrylic paintings on wood have developed the colourful repetitive patterns so often present in his collages. For Botulism expect myriad unprecedented works with that classic Bäst flavour. 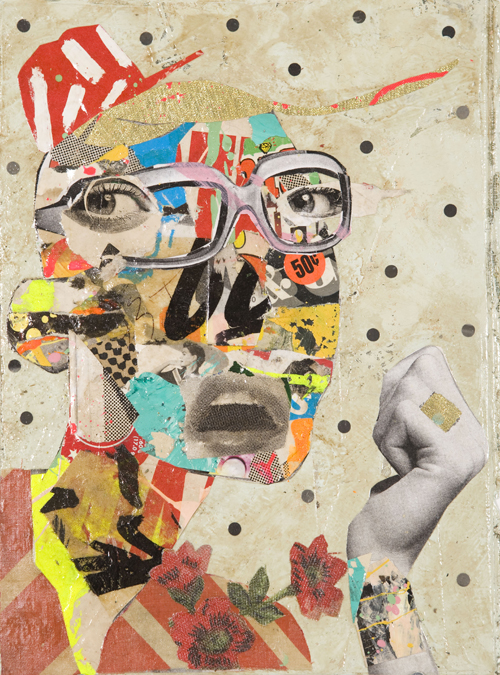 Bäst has been an intricate part of the street art scene for the past 10 years throughout New York and Europe gaining cult status and recognition from fellow street artists. Hailing from Brooklyn, Bäst is an elusive character whose work centralizes around the art of collage.

Little is known of his work outside of what the public sees throughout New York’s urban environment but since 2003 his work has evolved and been exhibited in various exhibitions: Faile Bast Deluxx Fluxx Arcade at Lazarides, London (2010), Graffiti at Galerie du Jour – Agnes B, Paris (2009), Beach Blanket Bingo at Jonathan LeVine Gallery, New York (2009), This is China at BLVD Gallery, Seattle (2008), Ridiculousnessofitallshow at New Image Art, Los Angeles (2005) and Fancy Faile and Bast at Galerie Neurotitan, Berlin (2003).

Apart from showing in Japan, LA, Colorado, New York, London, Paris and Berlin, he’s also released a limited edition book, Revolucion De Papel, the only publication to bring his many works on the streets of New York together. 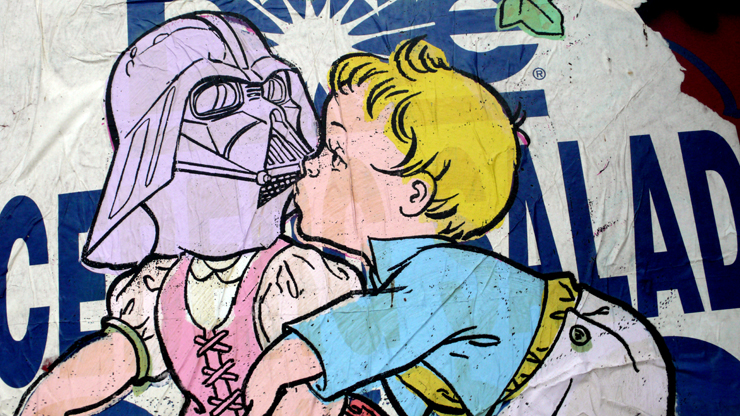 Working outside conventional practice and the contemporary art system, Lazarides welcomes a broad audience to an extensive exhibition programme, off-site projects and online exhibitions and collectives. Lazarides supports and develops the work of a group of artists who collectively, defy categorization.

The exhibition programme runs across spaces in London and Newcastle: Lazarides Rathbone, presents seven solo and group exhibitions each year, while The Dungeon on Greek Street, Soho and The Kitchen in Newcastle provide a platform for emerging talent and experimental projects by Lazarides artists.

Recently launched in July 2010, THE OUTSIDERS will become the home of publications, limited edition prints and collectable artistic ephemera as well as smaller presentations and screenings. Incorporating the online shop and the spaces on Greek Street and in Newcastle, THE OUTSIDERS will continue to welcome over ten thousand visitors annually and provide a one-stop-shop for all things outsider.

In addition to their extensive programme, Lazarides has also presented numerous exhibitions outside the UK most notably Banksy’s Barely Legal in Los Angeles (2006), Antony Micallef’s Impure Idols in Los Angeles (2007) and The Outsiders group show, New York (2008) along with the current successful 4-month exhibition programme in Beverley Hills showcasing a variety of group and solo exhibitions including the talents of David Choe, JR, Vhils, Conor Harrington, and Jonathan Yeo.

Images of the Week 10.04.09
Our Weekly Interview with the Street $469? I can't pay that much for a sports coat!  I just need it for an interview anyway, I'm not going to wear it hardly. (Bast, KRSNA) (photo Jaime R...
DRAN Closes "Public Execution" in London, Finally Complete
Either it will have proved to be a master class or an exhibition in hubris, says Pictures on Walls in their framing of the empty-framed show in progress by Dran in London’s Soho. Public Execution is o...
Mark Rigney and Ad Busting : 15 for 2015
What are you celebrating this season? We’re celebrating BSA readers and fans with a holiday assorted chocolate box of 15 of the smartest and tastiest people we know. Each day until the new yea...
BSA Images Of The Week: 08.31.14
A powerful group of images this week as we do a drive by on Labor Day Weekend in New York. We know it's the last weekend of Summer but hell no!  I'm gonna have another strawberry ice cream out o...
Images of the Week 08.23.09
Our Weekly Interview with the Street Double Mickey Bast (photo Jaime Rojo) Pondering beneath the ivy (Cake) (photo Jaime Rojo) Then she gave me a blank stare over her bare ...
Bast Lazarides London