That’s where the modern day Gay Liberation movement was born.  Instead of getting punched and kicked, intimidated and humiliated by the police as usual, people pushed and punched back into the street. In the small riots and demonstrations in the streets of New York over the following days, people who once were hidden now marched out in the streets – a tradition that grew and continues to expand across the globe.  Today that march for equality includes what is known as the GLBT (Gay, Lesbian, Bi-sexual, Transgendered) community.

The streets of NYC will have a GLBT parade with roughly 1 million spectators and with 18 year old Mississippi native Constance McMillen as The Grand Marshall because she stood up to the administration of her high school who cancelled the prom this year rather than permitting her to bring her date.  The public message, delivered on the streets, remains a potent and powerful force.

This month of June we also began seeing new pieces on the street by the Brooklyn street art duo Faile, who have frequented the social and political spheres with their stenciled messages numerous times over the last decade.  Among the pop and pulp inspired images were a couple of GLBT themed pieces, not usual in the Street Art or graffiti world. BSA had the opportunity to ask Faile about these new pieces and their significance to the artists. 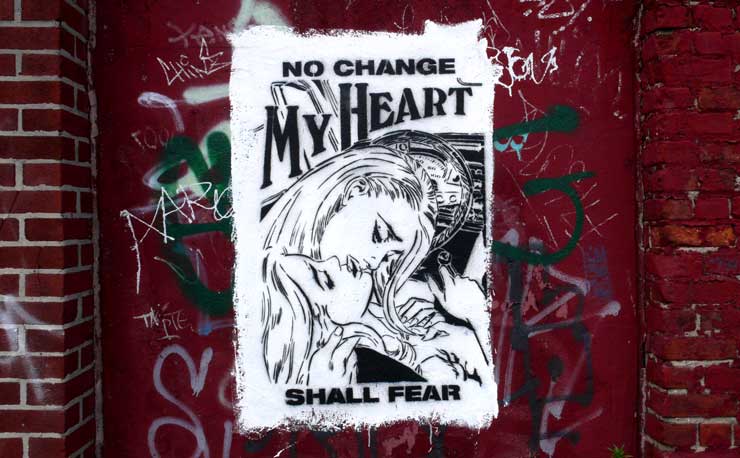 “The wording inspired from an old church pamphlet. Given the controversy of Gay Marriage and Equal Rights swirling around, this new image and wording seemed a perfect symbol to embrace this and be open to love in all it’s forms.” Faile (Photo © Jaime Rojo)

BSA: You still see and hear words like “faggot” and “homo” thrown around in graff and street art community occasionally. How would you describe the attitudes you see in the street art culture, and before that, graffiti culture, toward people in the GLBT community?
Faile: I don’t think we’re around this that often. At least not among the people we hang with. These words are thrown around casually by some, unfortunately, though this is not specific to street art. Either way, this isn’t a place we really dwell. We’re a little more lone wolf than pack hunters, on the street anyway.

BSA: What drew you to the topic of equality for gay, lesbian, bisexual, or transgendered people?
Faile: We didn’t specifically set out to make work about this topic. Many times, and especially recently, our image-making process is loose and experimental. We’ve been having fun with that again, really just playing. As some of the new images have come together we found something very provocative about an image of two girls locked in a passionate kiss. It was only later that in passing the image back and forth we placed this type from an old church pamphlet I found in my Grandma’s house. “No change my heart shall fear” seemed to speak so honestly, when paired with this image, to this crossroad in our culture. Where there is a group of people that are unfairly singled out and not given the same rights, especially with regard to marriage equality. It was this change that we spoke to, though in the image’s openness it can be interpreted in many ways.

The image-making is like this at times. You’ll create an image or collage something and it will just sit like that for some time. At times, it doesn’t need anything more and it’s better left open-ended and other times it really helps complete the idea; coming alive when there is type or a message paired to it.

The Gender Bender image of the “girl” at the urinal was again coming from a place of rawness and just the fun of making imagery. Sometimes it’s not until later that these have a power once they are out in the world, independent of our intentions. The work really invites the viewer in this way to bring their own interpretation to what’s there. The Bunny Boy image is a great example of that, it’s enticing and visceral in its mystery. Images speak to people in a variety ways.

BSA: Recently, a piece on the street by Faile expressed support for single moms and you’ve talked about war profiteering.  How important is advocacy of social or political opinion in your street work?
Faile: Well if we are trying to say something or place a message in our work then it’s there for a reason. We were really raised by our Mom’s as products of divorced parents, despite having great Dad’s, but we can relate to that.

War profiteering was a response to an intense time in the world and an ongoing issue that related to a series we were exploring at that time centered around oil and the war in Lebanon.

But I think our work is more emotional. It’s more about the wonder and the mystery than it is meant to be so literal. You have to see some fantasy in the world; a place for the imagination to run and have room for daydreaming. Often, our work lives here. The product of overly-stimulated and media-saturated people living in a city that never sleeps. If you still can’t find the quiet spaces and those tiny moments where everything just lines up you’re in trouble. We hope to create those moments in the work and on the street. 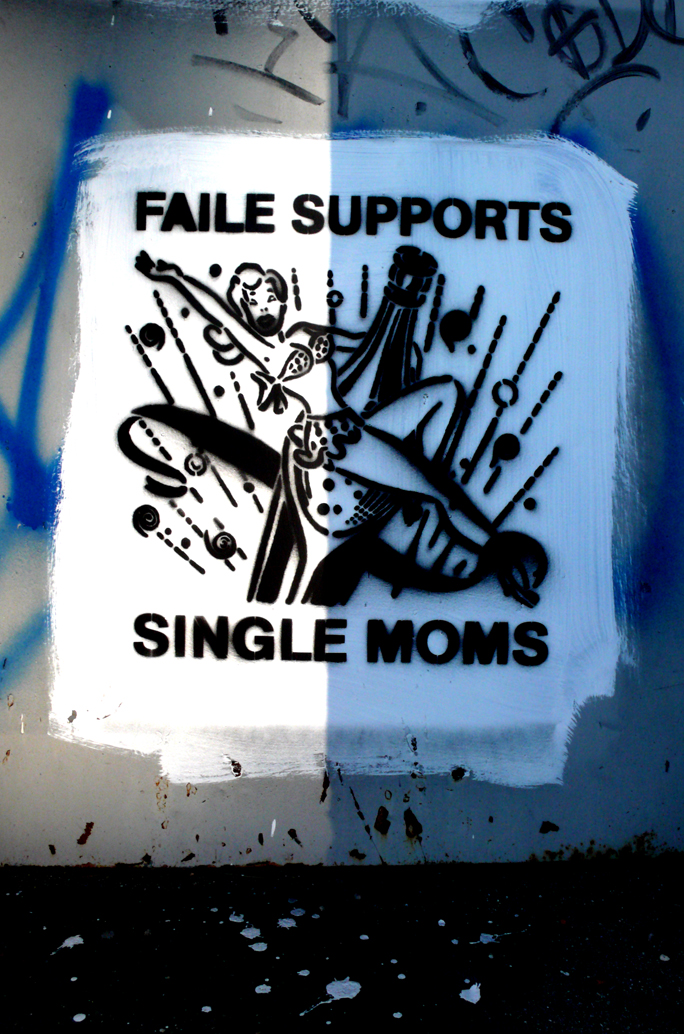 BSA: From a broader perspective, what role do you think Street Art can or should play to affect social or political change?
Faile: It’s a form of communication for the people. Meaning it’s direct and aims straight to the masses. In it’s most sincere form it’s there for anyone and not wrapped up in a hidden agenda. In this way, it has great power and people respond to that. I think it has saturation points and has been co-opted by some along the way, but I also believe there is a huge energy there and when struck in the right way can move mountains. 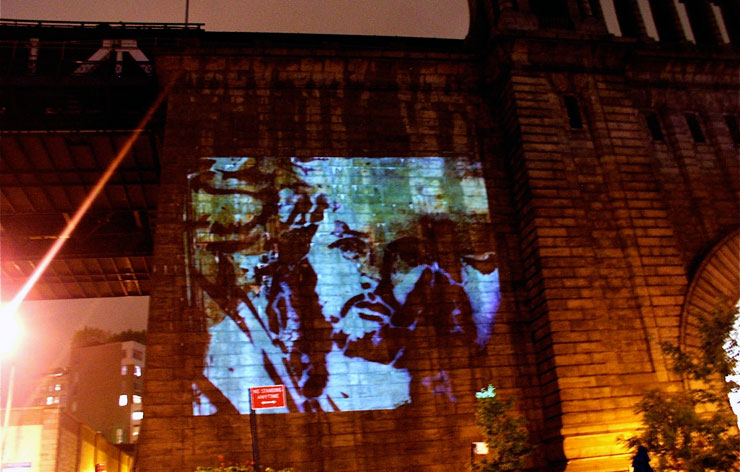 Image of Jesus projected on the Manhattan Bridge during BSA’s “Projekt Projektor” in Dumbo, Brooklyn in September 2008 (photo and projected image © Jaime Rojo)

BSA: Punk posters in the 70’s and 80’s used assemblage of text and images to create messages that struck at the heart of a system people considered hypocritical or sick.  How much of your work feels like punk to you today?
Faile: Our process has always resembled this loose and fast critique on society, whether it be literal or figurative. Our image-making has at times been very methodical and researched, other times it’s been experimental and dirty. Street art at it’s roots is “punk.” It set out to critique and comment on a world it felt outside of. I don’t know if it’s for us to decide really. We are just doing what feels right to us. If people see this as that, then so be it. 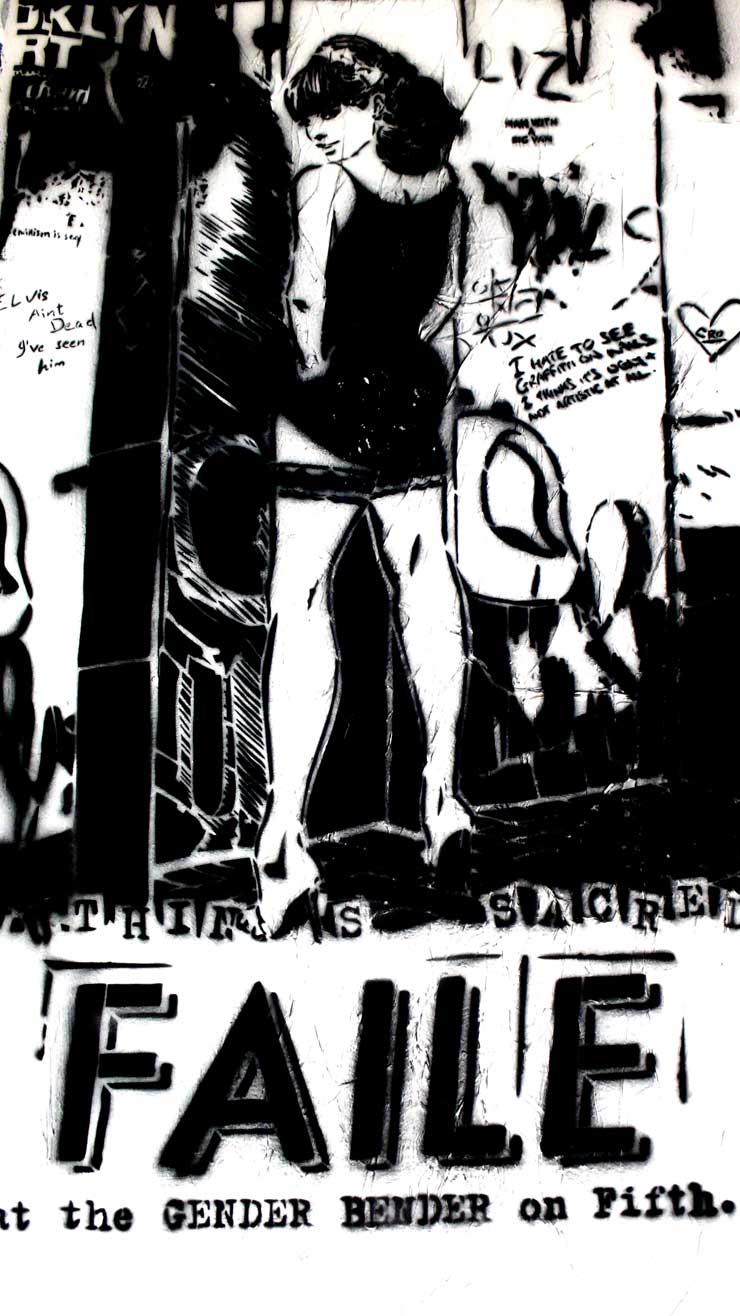 Banner image from Stonewall: The Riots That Sparked the Gay Revolution, by David Carter