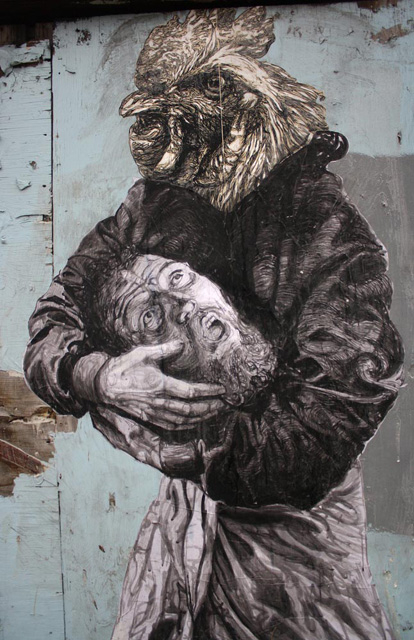 Drawing on his new and evolving body of imagery depicting human and animal figures, Gaia’s work reflects on the ancient themes of animal and human sympathies, but now in the context of the city and the human built environment. Working with myth and symbolic animal figures, Gaia’s street murals are like the works of an urban shaman drawing on a positive force from animal protectors.

Gaia employs recognizable animal figures to remind us of lost human connections to nature and the environment. He constructs an image of a reversal of the “natural order” where animals intervene as protectors and avatars for a new awareness of the human condition in the natural world. He is known world-wide for street murals placed in areas to elicit surprise and reflection by passers-by who encounter the symbolism and fragile narratives of his work.

Gaia is currently a student at the Maryland Institute College of Art in Baltimore, Maryland, concentrating on printmaking and sculpture. His studio work and gallery projects have been exhibited in Brooklyn, New York, Los Angeles, San Francisco, and Washington, DC. His work has been documented and featured in several recent books on urban art, including, most recently, Beyond the Street: The 100 Leading Figures in Urban Art, Patrick Nguyen and Stuart Mackenzie, eds. (Berlin: Die Gestalten Verlag, 2010). Gaia lives and works in Baltimore, MD, and Brooklyn, NY.

Metro
The gallery is four blocks north of the McPherson Square Metro station, five blocks north-east of the Farragut North Metro, and five bocks east of the Dupont Circle Metro.

Fun Friday 06.15.12
1.    Wilson Picket Live “Land of 1000 Dances” 2.    Northside Festival in BK 3.    Flying Fortress at Mighty Tanaka (Dumbo,BK) 4.    Welling Court is Back! (Queens) 5.    Broken Crow at XYand...
GAIA : New Mural Work in Greenville, Atlanta, Detroit
The traveling Street Artist and historian / student / observer / critic of urban planning, anthropology, people’s movements who goes by the moniker GAIA shares with us today some of the back stories f...
See the Gallery Show! The BSA-UN PM/7 Pop-Up Exhibition
Behind the Scenes for the Brooklyn-Berlin Pop-Up Last Saturday the 14th the public was invited to an open reception to meet the artists who had flown to Berlin to create new portraits for Urban Natio...
Botanical Crowns, Blended Gender, and New Jazz: Gaia is "Overjoyed" In Baltimore
Freshly coiffed botanical crowns, community stakeholders, a formal design committee, studio photography with stylized gender blending sitters, two weeks of public mural painting, a certain inflection...
GAIA in Progress at The Rice University Gallery in Houston
Street Artist Gaia Talks About New Installation and Latest Study For the opening this Thursday Gaia will be talking about the impressions he has gathered and internalized of Houston’s urban sprawl an...
DC Gaia Irving Contemporary St. John Washington