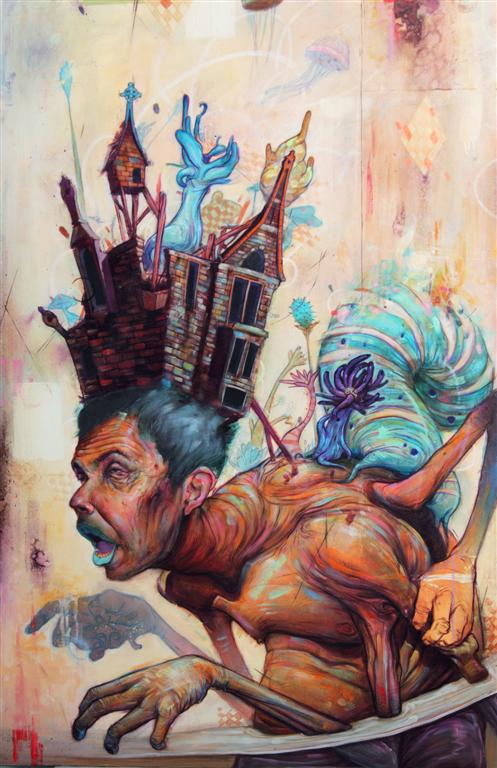 New paintings, drawings and an installation from Ekundayo

Fri, June 11th 7-10PM with both artists in attendance

The Crepe’n Around Truck will be out during the opening reception – be sure to bring your appetite!

(Los Angeles) Thinkspace is excited to welcome back Los Angeles based artist Ekundayo for his second solo show with our gallery. Also taking place at the same time in our project room will be the debut Los Angeles solo show from San Francisco based Brett Amory.

‘Joy Today Jeopardy Tomorrow’ is an exhibition about the beautiful struggle we all face of reaching for our dreams, in hopes of guiding our own destiny. Whether we succeed or fail is not important, as long as it’s on our own terms. Ekundayo’s work illustrates the sacrifices we make in the pursuit of fulfillment, while simultaneously questioning the actions taken to attain this ‘fulfillment’ we all seek. A great deal of inspiration for this new body of work has come from the life of Marcus Mosiah Garvey Jr., an African nationalist who during the 1920’s had a vision to bring his people from all over the world to a higher level of  conciseness in regards to where they come from and how they provided for themselves. Although Garvey failed in his ultimate goal of having a fleet of steamships fairing people from all over the world to Africa in-order to connect them to their origins, he left a legacy behind that continues to inspire countless others.

When looking at the work you get a sense of an inner struggle with the central figures being anchored by a large burden, while at the same time appearing weightless, as if suspended in moments of relief. A sort of “misshapen beauty” which speaks to the imperfections and vices found within all of us. Ekundayo’s pieces are handled with a deliberate sensitivity, framed by moments of very loose, almost sporadic applications of paint, which help to give the finished works a sense of inadvertence, that in turn serve as a testament to the artist’s intent.

In our project room we welcome Brett Amory. His painting series entitled “Waiting” depicts the urban individual’s yearning for presence and the seeming impossibility of attaining it. The paintings portray commuters in transit immersed in either a quiet, even hopeful state or, alternately, a state of anguish due to unfulfilled anticipation.

At first, the series, begun in 2001, depicted travelers waiting underground. But as the paintings evolved, the people ceased to be exclusively travelers, and began to emphasize figures selected from anonymous snaphots of city streets taken by the artist during his travels. Although the experience of waiting remains, the perception of it has changed from one of mundane task to one leavened with transcendence.

The series has also charted the evolution of an artist—the reductive elements of the compositions provide an outward echo of the inner states of the figures.  By reducing the elements of the painting as far as possible, a frozen moment is extended.

Lastly, Amory has developed favored motifs in the series, a kind of visual music, such as repetition of a human image, to show not only the passage of time but of the human being through it.

In our main gallery space::

Ekundayo (Dayo) was born in Honolulu, Hi, in 1983 where he lived with his mother and father until the age of five when his mother and father could no longer get along. Ekundayo’s father snuck him out of the state without his mother’s knowledge, and for seven years Ekundayo and his father moved from place to place living a life on the run. Meanwhile in her desperate need to find her son, Ekundayo’s mother helped start Hawaii’s first clearing house for missing children. The life on the run ended in 1994 when his father moved to California with Ekundayo’s sister because his father was dying from cancer. In early 1995, Ekundayo’s father passed away from lung cancer; Ekundayo was eleven…

Ekundayo lived with his sister, brother in-law, four nieces and his sister’s mother in a small three-bedroom and one-bath house in Pacoima, Ca. It was in this house at the age of 13 that Ekundayo discovered his love for art. After being involved in school fights, stealing and hanging with the wrong people, he was suspended from school. One day while in the garage, he found one of his uncle’s black books. This uncle wrote for a graff crew in L.A. called C.H.B. This book completely changed Ekundayo’s life. He became obsessed with drawing and copied every single page in that little book. Meanwhile, the Dept of Justice had located Ekundayo at his sister’s home and returned him to the custody of his mother. Ekundayo went back to Hawaii to live with his mother. His drive to create didn’t stop, and the encouragement from his family only fueled that ambition. Shortly after graduating high-school, Ekundayo moved back with his sister and brother in-law in much more spacious accommodations. He attended Pierce College in Winetka, Ca, where he practiced his craft and worked on his portfolio until 2003 when he was accepted into Art Center College of Art and Design on a scholarship.

Although the teachers he studied under and the friends he met while going to Art Center were priceless to his development, Ekundayo dropped out after completing his foundation courses in order to create his own path in the fine art world. He combines both subversive graffiti aesthetics in combination with art-historical erudition using acrylic, gouache, watercolor, ink and various carving techniques. Ekundayo’s work expresses the struggle of life and how those struggles and burdens can either inspire us to change in a constructive way or weigh us down by our own inability to change.

Take a ‘Sneak Peek’ at the works for ‘Joy Today Jeopardy Tomorrow’ coming together:

In our project room:

Brett Amory was born June 25th, 1975 in Portsmouth, Virginia. His father, Harry Amory, was a mechanic at a shipyard and his mother, Sally Roebuck, a nurse. When he was 21 Amory moved to San Francisco to study motion pictures at the Academy of Arts. Soon after enrolling in school, Amory took his first drawing class and was introduced to his passion for the arts. Around the time Amory celebrated his 24th birthday he tried his hand in painting. In 2002 Brett switched his major to fine art and started his current body of work called “Waiting”. This series of paintings explores the anticipation of the next moment.

Amory graduated from the Academy of Arts in 2005 and has shown his work all over the country. In 2006 Amory along with five other artists (Mars-1, David Choong Lee, Damon Soule, Nome Edona, Oliver Vernon) published a book called “Convergence” and had book signings in New York, Los Angeles and at the SFMOMA in San Francisco.

Amory currently works as a graphic designer at an environmental company in San Francisco and continues to show his work in galleries across the country.

Take a ‘Sneak Peek’ at the works for ‘The Waiting Room’ coming together:

Check out a great video documenting the process behind the piece ‘Waiting #54’:

‘The Next Generation: A New Chapter in Contemporary Art’ – 45 international artists curated by Thinkspace and presented by London Miles Gallery (www.londonmiles.com)

Coming up in July at Thinkspace:

Images of the Week 06.12.11
Our weekly interview with the street, this week featuring 130, BAST, Dark Clouds, David Flores, Enzo & Nio, Mare 139, Skewville, Twenty, and Veng. Skewville and Bast did this new Brooklyn boom b...
Images of the Week 01.29.12
The streets have been seeing an uptick in socio-political messages recently, whether because of the Occupy protests, or because artists are exercising their speech in low cost, low-tech, person-to-p...
NOHJCOLEY "Back Talk" Conversation
To introduce readers to some of the Street Artists in the upcoming show "Street Art Saved My Life: 39 New York Stories", BSA asked a number of the artists to take part in "Back Tal...
French Artist COMBO Wants You To Smoke...POT
French Street Artist and media-savvy prankster COMBO is back with a new street art and social media campaign to affect what he calls “a bourgeoise hypocrisy that reminds us of alcohol prohibition”. E...
Peek Inside Organized Chaos of CYRCLE
Beauty is something wonderful and strange that the artist fashions out of the chaos of the world in the torment of his soul. - William Somerset Maugham. Street Art collective CYRCLE couldn’t agree mo...
Brett Armory Culver City EKUNDAYO Los Angeles Think Space Gallery