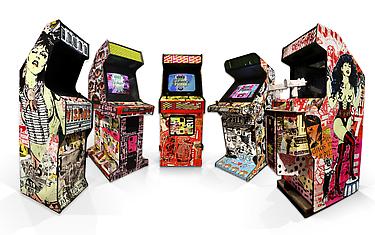 What do you get when Brooklyn-based duo Faile and collaborator Bast take over a disused store front on the Lower East Side? Deluxx Fluxx, a functional video arcade that will be open to the public from April 30th to May 27th.

Originally conceived as a one-off project in London, Deluxx Fluxx allowed Faile and Bast to indulge nostalgia for the classic video arcade while exploring the tactile possibilities of the wooden cabinet as sculptural medium. In its New York incarnation, the retrofitted machines run new games by Adapted Studio based on Faile and Bast’s omnivorous visual language, with sounds produced by Seth Jabour of the noted band Les Savy Fav.

Deluxx Fluxx aims to make art less sterile, more fun, and accessible to a broad audience. This sensibility harkens back to the golden age of arcade games; a time when the Lower East Side itself was still a redoubt for punk rock and graffiti culture. These foundational roots of the neighborhood are apparent in the show’s DIY and street art production values. Faile and Bast rebuke the contemporary art world’s fixation on ideas of relational aesthetics and democratization, and give their audience a chance to genuinely engage the work without the looming formality of the traditional gallery. Deluxx Fluxx is entirely interactive, and invites viewers to play a round of psychedelic foosball and take part in the art itself. It is the artists’ intention that viewers will forget they are looking at art, and be captivated by the carnivalesque. The video arcade may be a lost form, but in Faile and Bast’s re-imagining, it gets a temporary and much needed revival.

Images of the Week 12.05.10
Our weekly interview with the street, this week featuring: Alec, El Celso, Faile, Kenny Scharf, Kouk, Robots, and UFO The finished Kenny Scharf Houston Street wall has brought a jolt of flamboyant c...
"Beyond The Streets" Exhibition : Gastman's Train Pulls In to LA
A steel-wheeled graffiti train with Roger Gastman at the controls roars into LA’s Chinatown for a two-month stay at this station, a 40,000 square foot warehouse that houses “Beyond the Streets.” Origi...
Images of the Week 11.06.11
Our weekly interview with the streets, this week featuring Bast, Christian Paine, Jim Avignon, Jon Burgerman, LMNOP, Enzo and Nio, Stikman, Toofly, and WAS. Jim Avignon took the entire block with t...
The 2013 BSA Year in Images (VIDEO)
Here it is! Our 2013 wrap up featuring favorite images of the year by Brooklyn Street Art’s Jaime Rojo. Before our video roundup below here is the Street Art photographer’s favorite of the year, sn...
"Beyond The Streets" On Paper Opens in Southampton
This time of year, it is hard to find people in Manhattan on the weekends – they’re “weekending” in the Hamptons, darling. Khari Turner, Hands Not exactly the original setting you might associa...
Bast Faile Perry Rubenstein Gallery