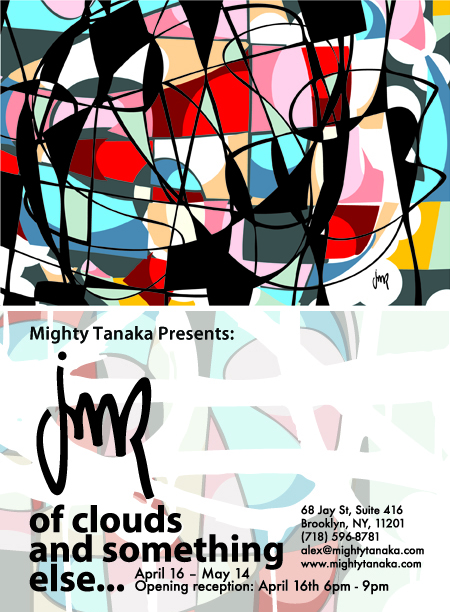 Brooklyn, NY – April 4, 2010 – Mighty Tanaka is very pleased to bring you Of Clouds and Something Else, a solo art show by JMR.  As he skirts the boundary between Street Art and Fine Art, JMR has been constantly evolving his neo-abstract technique over the past ten years.  Through his exploration of form and process, he has developed a unique style all his own.

Of Clouds and Something Else exemplifies the deconstruction of JMR’s approach to his process, as he releases the tension of his lines and allows his work greater movement and flow.  Balancing his line work and color palate, all parts of his artwork shares distinct and equal importance.

JMR’s steadfast pursuit of a modern styles and organic movements marks a new identity in his lifelong artistic development.
About the Artist

JM Rizzi, or better known as JMR, has adapted a unique mixture of Neo-Abstract Expressionism with hints of Contemporary Pop to create a style all is own.  With experience in both the street art as well as the gallery world, JMR’s imagery is has become an icon in both his native New York City and his new home in Dallas, Texas.  He looks to demonstrate the scale and motion set forth by early abstract expressionists while reinterpreting it within his own introspective adaptation.  Through his hybrid street style, JMR has dedicated himself to expanding his art further into the public arena.  Having completed a building sized mural in Manhattan at the Pod Hotel, as well as numerous commissioned projects around Brooklyn, JMR looks to take his art to the next level.
OPENING RECEPTION:
Friday, April 16, 2010 – 6:00PM-9:00PM, and closing May 14, 2010

BSA Images Of The Week: 06.05.16
It's Bushwick Collective Weekend Yo! The assembled faces and artists is local, national, international - a melange of what Brooklyn has become in recent years and the streets are alive with invo...
New High-Water Mark for Street Art at Fairs for Armory Week
This year represents a high-water mark for current Street Artists being represented at the New York fairs if what we have just seen over the last couple of days is any indication. For those who have b...
JMR and Alexandra Pacula POP-UP on 14th Street
You gotta roll with the punches just to make art happen in New York. BSA headed by bicycle across the Williamsburg Bridge Wednesday night to to take a look at the newly installed Mighty Tanaka pop-up...
BSA Images Of The Week: 05.18.14
Here our weekly interview with the street, this week featuring AEON, Arturo Vega, Bio Tats Cru, Balu, Bifido, COL Wallnuts, Crash, Federico Cruz, JMR, Kram, Kronik, Labrona, LMNOPI, Meca, Moby, ...
Street Artists At The Fairs For Armory Week NYC 2014
Not quite spring, the Art Fairs are arriving in New York ahead of the tulips. We strolled the impossibly long aisles and peered into the booths to find the folks who have at other times been called ...
JMR Mighty Tanaka