The Banksy Movie With So Much More

One basis for “beef” on the street is another artist “biting” your style. But enthusiastic Thierry Guetta proved to be such a good student that he’s nearly made an art out of it. 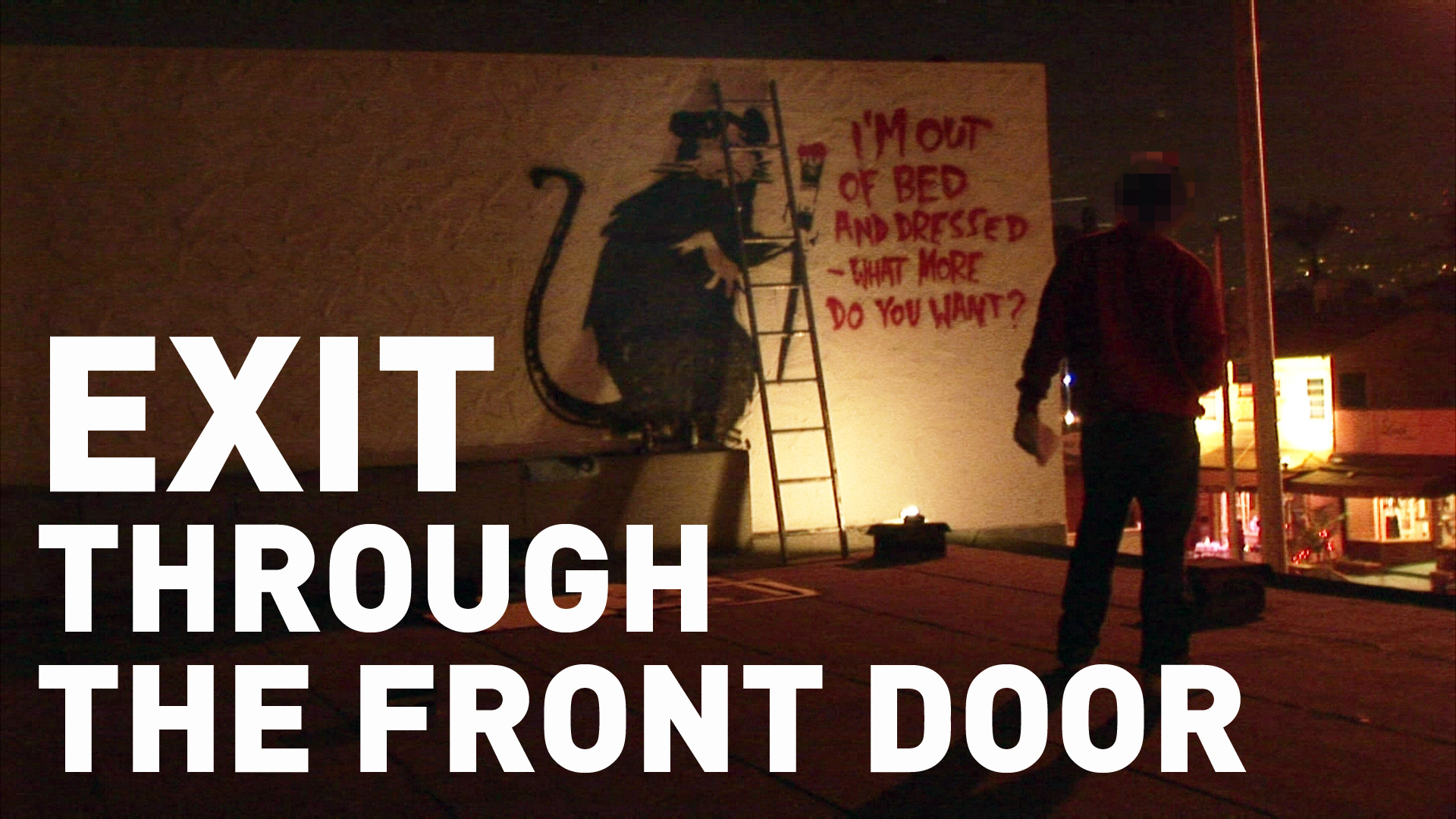 The danger presented by “Exit Through the Giftshop”, opening April 16th in New York, is not that Shepard Fairey and Banksy discovered too late for their comfort that a trusted acolyte and “documentarian” eventually imitated their aesthetic approaches successfully, but that he studied their marketing manuals too.

“Exit” is a blast – and not just for those considering themselves insiders because they caught the Street Art Train just as it pulled away from all previous definitions of urban/graff/public/fine art.  This hilarious high-speed romp knows how to keep the storyline infused with new oxygen with each twist of plot, with players swapping in and out of the frame to illustrate points, and locations jarringly jabbing throughout with a Blair Witch finesse for nausea.  In the end it appears that no animals were harmed.  But few in the “Street Art” world will be able to say the same.

For the fans, many of the names (and some of the faces) you know are all in here, a scatter-shot list dictated by Guerra’s dedicated following of the secretive and shadowy urban art trail: a lot of Banksy and Fairey, and slices of Invader, Zeus, Swoon, Neckface, Borf, Dan Witz, Sweet Toof, Faile, Ron English, among others.  Other players like Steve Lazarides and Roger Gastman help us to ground the machinations in the context of the chaotic developments. Darth Vader, I mean Banksy, slopes in the shadows dropping dollops of witticism like so many blobs of paint and comes off more haunted than haunting.

Banksy clearly says at one point, “It’s not about the hype. It’s not about the money,” but most viewers will feel a twinge of incredulity at the statement, however heartfelt in that moment. Any artist who goes to such lengths to insure anonymity and stage installation stunts that top the previous ones may have calculated a wee bit of the old evil hype into the equation.  The story as presented shows how hype for it’s own sake can become unhinged entirely from it’s core mission, clone itself at a rapacious pace and unwieldy velocity, and finally stand by itself as an art.

It’s too easy to flatten the layers of the actors in this post-post-post modern play, and lazy.  It’s not just a story of two street artists unwittingly training their competition while enjoying the company of a one-man glee club with one hand on the ladder and a roving eye. Instead a documentary of this complexity may stand as a jittery cautionary tale, a dramatic foreshadowing of a world of de-contextualized images, recombined and employed with a sharp hand for any purpose anywhere.  It’s not the first time that imagery has been appropriated and re-engineered – it’s just the ease of use and wonderful availability of it all.  As one of MBW’s graphic artists explained about the process of creating new works for him to give up or down thumbs, “We scan the pictures and use Photoshop”.  Hopefully increased cultural literacy of these technological truths will prepare us to deal with future mash-ups of things we once considered institutions. 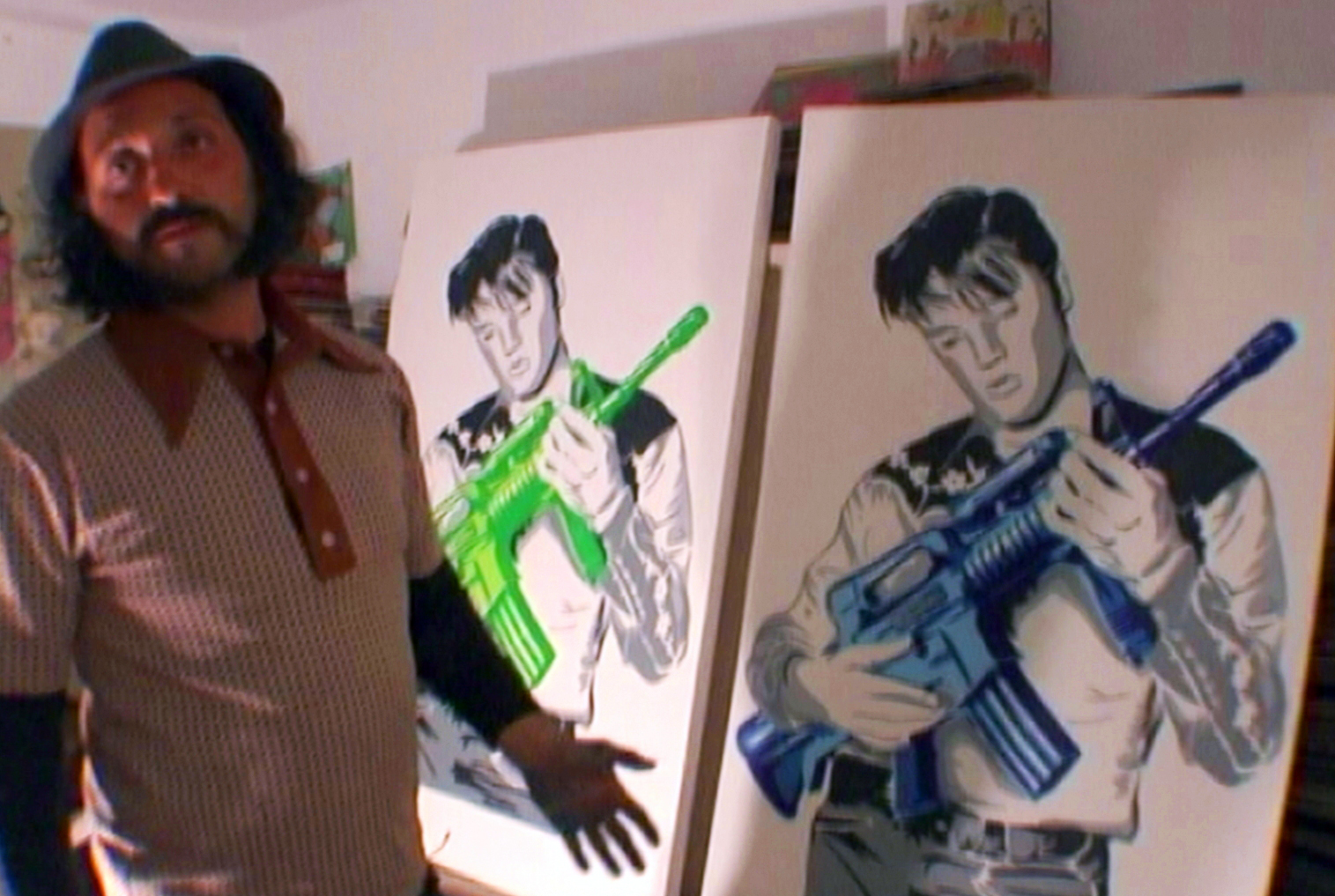 Guetta is at times depicted as a loyal fan, an insatiable documentarian, an unsteady hand, a loving family man, and an immensely driven director of his career. For the measured hand-wringing Fairey and Banksy express about their association with the elephant in the living room that eventually emulated them, each of them is too smart not to have seen it coming, and they seem to delight in the waves he has made. While reflecting on his own tumultuous path through the street art world as it continued to explode around him, the filmmaker, street artist, and man behind the moniker MBW says, “I don’t know how to play chess, but my life is a chess game”. Check!

“Exit Through the Gift Shop” comes to the US April 16. 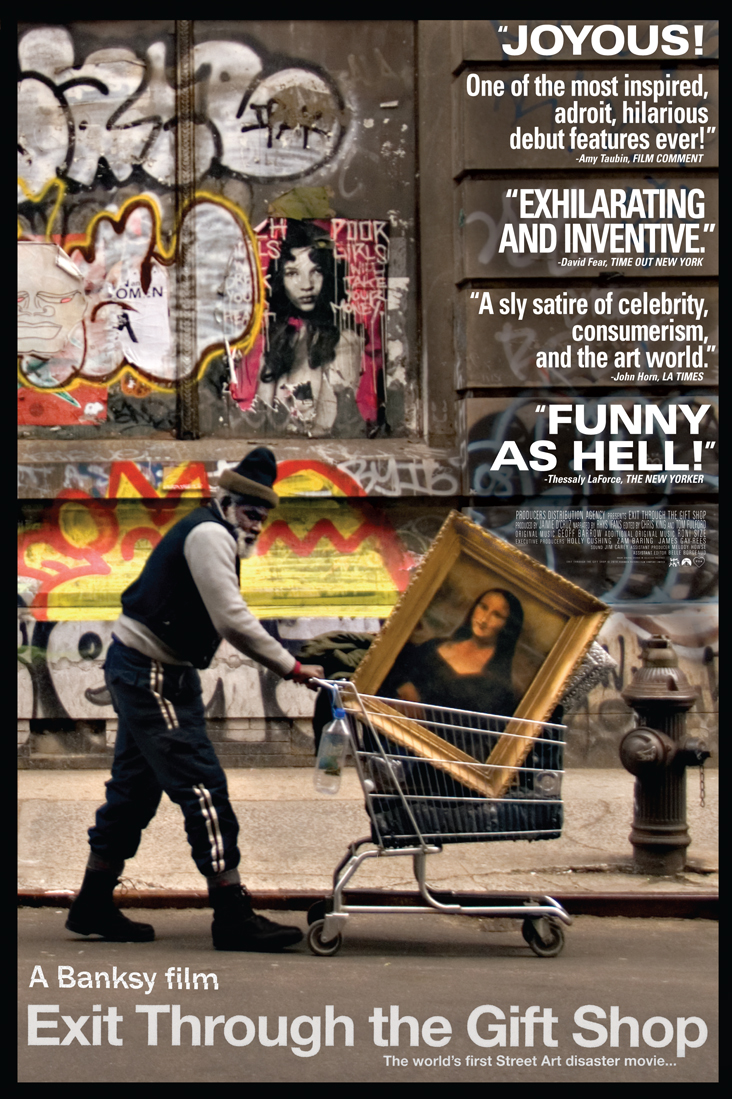