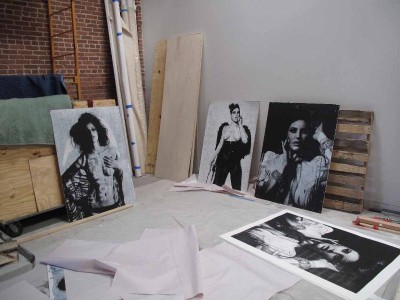 Retna was born in Los Angeles, California in 1979. Since first creating a name for himself in the early 1990s, Retna has become an “eternal broadcaster” of sorts, shining a light to the kinetic urban soul of Los Angeles. The name RETNA itself evokes the timeless power, movement and visual vibrancy behind the artist’s acclaimed work. His work merges photography with graffiti style and paint, time with color, couture with street culture, the spiritual with the sensual, and fluidity with grit. Whether his paintings hang in a gallery or wall on the streets of Los Angeles, they serve as a retina through which we view the urban journal of contemporary art.

At an early age, Retna was introduced to L.A.’s mural culture. While still in high school, he led one of the largest and most innovative graffiti art collectives the city has witnessed. He is perhaps best known for appropriating fashion advertisements and amplifying them with his unique layering, intricate line work, text-based style and incandescent color palette reflecting an eclectic artistic tradition. RETNA became just as notorious for his ornate painting technique as his timeless style: he used paintbrushes mixed with the traditional spray can. Many of his pieces synthesize the line between fine art and graffiti, between power and opposition, between tradition and advancement.

Today, Retna traverses between the galleries and streets with ease. Retna is a member of the Art Work Rebels and Mad Society Kings Art Groups. In December 2007, he contributed to a large-scale mural project with El Mac and Reyes called “La Reina del Sur” at Miami’s Primary Flight during Art Basel. His most recent projects include an exhibition titled “Vagos Y Reinas” at Robert Berman Gallery and a mural called “Seeing Signs” at the Margulies Warehouse for Primary Flight

BSA Images Of The Week: 11.26.17 Mexico City Special
This week BSA is in Mexico City in collaboration with Urban Nation Museum of Urban Contemporary Art (UN) to see what is steering the scene on the street, meet artists, visit artist compoun...
"Beyond The Streets" Comes To Brooklyn in June
Gastman’s Massive Graffiti and Street Art Show Arrives at Epicenter. "I'm really excited to bring this show to New York,” says curator, graffiti historian and urban anthropologist Roger Gastman, “...
BSA Images Of The Week: 01.21.18
The streets across the US were again flooded with justifiably angry, determined women yesterday. Nothing we can say here will do justice to the enormity of the crowds protesting in 250 cities on...
Artists Bring 22 New Murals to "Coney Art Walls 2016"
Just in time for this weekend’s Mermaid Parade, London’s D*Face is finishing up “Live Fast Die Young,” his beauty-and-the-zombie comic couple sipping an ice cream float at the soda counter. Austrian s...
"Art Silos" Rise in the Harbor of Catania, Sicily
They’ve been here since the 1950s, these silos for wheat and corn on the harbor of Catania on the east coast of the island of Sicily at the foot of Mount Etna. 28 meters tall and facing the Ionian Sea...
Desaturated New Image Art Retna