Mundano said the opening night was perfect, “A lot of people, artists, Japanese food, hot weather, cold beer, caipirinha, 5 big canvasses sold and a lot of projects running at the same time. I wish you and other friends from NYC could have been at the opening last night,  – the same way I want to be in NYC to see personally the exhibition of fresh pieces on the streets.” 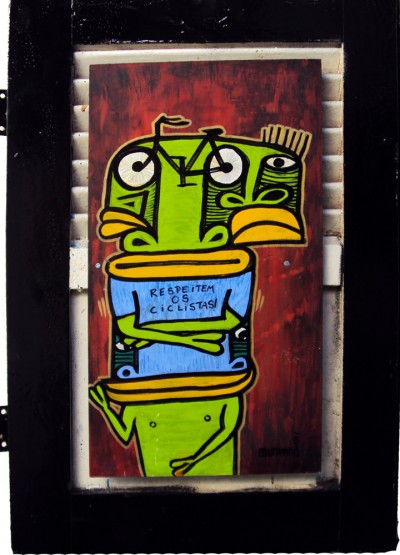 Painting on found objects by Mundano.

Themes from the show, and often in Mundano’s work, include issues of economic justice, environmental pollution and waste, recycling, bicycling, consumerism, and witty playful  monsters with faces of the ancestors, every watchful and observant.

Mundano likes to use street art as a way of a social revolution. He says his characters are imbued with messages so people can see and think about the problems he addresses. 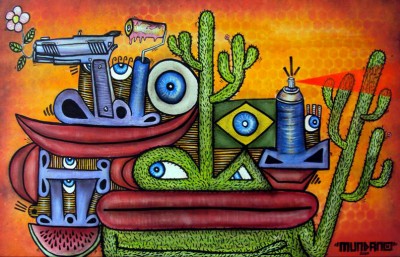 Some recurring symbols and expressions from Mundano.

Grand Opening: March 10th, Wednesday, from 20h to 23h
The show runs till April 10th. The music, food, and entertainment venue is open Wednesday to Saturday
Asia 70
Domingos Andrades st. (corner with Kansas st.)
Brooklin
www.asia70.com.br
Call 11 5102 2215
About the Artist:
Mundano’s work can be seen in the favelas, big avenues, as well as art galleries and on his Flickr page: www.flickr.com/artetude

Brooklin & Brooklyn: São Paulo and MUNDANO
Brooklyn isn’t just a borough of 2.2 million people in New York City, it is also a neighborhood in São Paulo, Brazil. photo credit: Stella Dauer And guess what?  That’s right homie-lera, th...
BSA Images Of The Week: 06.26.16
Berliners called it the “großes Ohr”. The Big Ear. Run by the American NSA and the British in their sector, this “listening station” stands atop a man made mountain of rubble, at the bottom o...
Images of Week 07.12.09
Our weekly interview with the streets The desire to regenerate Viking manhood through heroic struggle meets Dior. (El Sol 25) (photo Jaime Rojo) Interstitial musings on cranial sacral ...
Brazil's Mundano: "Operários de Brumadinho’’, Workers, and Loose Regulatory Environments / Dispatch ...
As reported this week “The Environmental Protection Agency announced a sweeping relaxation of environmental rules in response to the coronavirus pandemic, allowing power plants, factories and other f...
BSA Images Of The Week: 09.11.16
It's the 15th Anniversary of 9/11 in New York. It will be a quiet day for us. We hope. So, here’s our weekly interview with the street, this week featuring Bast, Elian, EQC, Hama Woods, MCA, M...
"Cidade Reciclável" From SÃO PAULO MUNDANO Recycable City