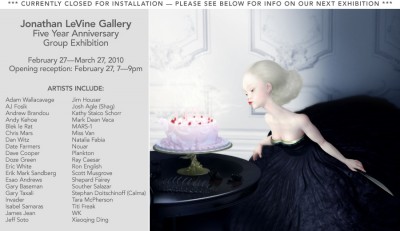 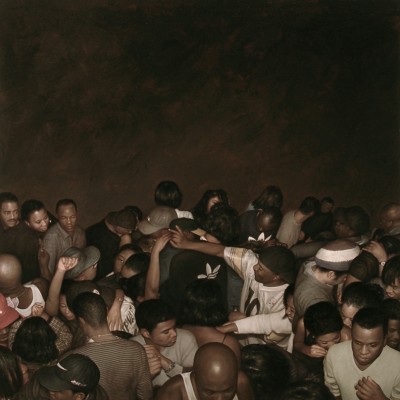 NEW YORK, NY (January 26, 2010) — Jonathan LeVine Gallery will celebrate its fifth anniversary with a commemorative group exhibition featuring exceptional and exemplary new works by forty artists who are either currently represented by the gallery or who have exhibited at the gallery in the past five years. The exhibition will be on view from February 27—March 27, 2010, and there will be an opening reception on Saturday, February 27, from 7—9pm.

Since 2005, Jonathan LeVine Gallery has been an important venue for Street Art (ephemeral work placed in public urban environments) and Pop Surrealism (work influenced by illustration, comic book art, and pop culture imagery). As such, the pieces in this exhibition—comprised of paintings, drawings, and sculptures—will be primarily figurative with a strong sense of narration.

Artists in this exhibition have developed prominent creative voices for themselves as individuals, while also playing valuable roles within the historical context of the larger Street Art and/or Pop Surrealism movements. All of them have been influential in shaping the gallery’s program, creating work with a unique counter-culture point of view.

In LeVine’s words: “I believe that my program represents a generational shift, and that the artists who I work with will continue to define the evolution of this genre.”

Artists with work in the exhibition include (more to come):