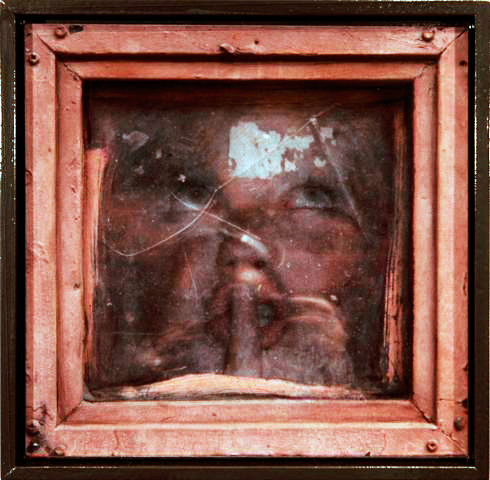 You’ve walked by his work a hundred times on the street in plain view.  No really, you probably have, and didn’t know it.  Dan Witz specializes in detailed work that when fully realized, can be be easy to miss.

“Dark Doings” is getting a lot of attention along North LaBrea Avenue.

A Chicago native, Witz has been in New York since he was an art-school punk at Cooper Union during a drug deranged haze that reigned in the economically bombed-out Lower East Side at the dawn of the Reagan Revolution.  Graffiti art was expanding and morphing into many styles as this thinking-man explored an anti-graffiti that did anything but seek attention for it’s own sake.

Gallery preparations are underway for the show. (image courtesy Carmichael)

Over the years Dan has specialized in conceptual pranks, street interventions, and Dutch master inspired palm-sized oil paintings.  While inspired by graffiti writers as a student, he instead practiced a more studied craft on the street that almost asked to be overlooked. Much of his work has adorned quietly, a subtle strong commentary to those who would observe.

Tomorrow at Carmichael Gallery the prolific Witz, now from Brooklyn, will be expanding on a series he began a few years ago that was meant to draw attention to the new boom in soul-less building design in “up-and-coming” neighborhoods like Williamsburg.  The fake exhaust vents, placed appropriately along the facades of “ugly” buildings, feature fingers and gloved hands pressing between the grates in an act of escape.

Can you keep a secret? (Dan Witz) (image courtesy the artist)

“Dark Doings”, the new show, takes the experiment a step further to the safety windows that beckon from steel doors in industrial areas. Attached in such a realistic manner, you may think that a woman has her face pressed up against the glass from inside.  Or you may not notice his work in plain view.

Brooklyn Street Art: Dan, my front doors have those same square wire-veined windows! One night a drunk neighbor couldn’t find his key so he smashed one with a can of coke and there were little pieces of glass all over the floor. Your people definitely look trapped in there. Little portholes of desperation. Or is that just me?
Dan Witz: I like that story. But I’d change it to little portals of desperation.

Brooklyn Street Art: Sometimes your pieces on the street are so well camouflaged that people will not know they are there. Would you rather that your work is discovered or looked over?
Dan Witz: I know it’s perverse and probably not in my best self-interest but I love the idea of thousands of people walking by my pieces every day and not seeing them. Eventually though the law of averages (I put up so damned many of them) will catch up with you and you’ll see one. Then I’m hoping you’ll go, ‘Holy shit!” and begin to wonder what else you’ve been missing out there.

Brooklyn Street Art: You like to be outdoors, and many of your pieces in Brooklyn are about people trying to get out through vents of ugly new buildings. Is this work autobiographical in any way?

Dan Witz: The Ugly new Buildings projects is autobiographical inasmuch as I live in the neighborhood that these arrogant architectural abominations have been inflicted upon. The subtext of the piece was never one of escape, but more of frustration and powerlessness. As a street artist I take what’s happening on my own streets very personally.

Another project was to re-create street signs that contain characters or body parts in them, like this one with a scuba diver. (Dan Witz) (photo Jaime Rojo)

Brooklyn Street Art: “Dark Doings” still retains a punk rock flavor. And yet, so much of your work seems luminous and glowing and warm. Does a punk ever lose that rebellious dark side?

Dan Witz: It’s true that much of my youth was spent romanticizing the dark side. I believed that the truth could only be found by a violent rejection of the status quo. I still believe this, especially concerning creativity, but the truth about the so called dark side is that it’s mostly a pose and that the rest is ultimately sad and is the graveyard of a lot of wasted talent.

I’m just glad I made it back to report on it with my faculties (somewhat) intact. At some point after I hit thirty, I noticed that all I wanted to paint was light, and I needed to make it as warm and luminous and spiritually nourishing as I could. Not too ‘hip’ a career concept one would think, but somehow this turned out to be a rebellious act as well–at least for me. I can’t claim the metaphor was intentional but it’s not the first time my work has benefitted from such a suspiciously lucky coincidence.

The exhibition “Dark Doings” will have an opening reception
Thursday November 5 from 7-10 PM at Carmichael Gallery in West Hollywood, CA.

Marx Turns 200 in Montevideo. 3 Street Artists Paint "After Marx" for Goethe-Institut
Karl Marx had his 200th birthday this year, proudly rocking a “Black Lives Matter” t-shirt. Vince. Tunnel , Avenida 8 de October. Montevideo, Uruguay. September 2018. (photo © Various & Gould) ...
Sewing the Walls: Elbi Elem "Gemotrias Variables" in Berga, Catalonia
Street artist Elbi Elem is revealing shapes that are inside this old building in Catalonia- a series of “Variable Geometries”. Elbi Elem. Geometrias Variables. Konvent. (photo courtesy of Elbi Ele...
Shepard Fairey says "Action is worth more than words" with Marianne in Paris
“I actually side with people who oppose injustice,” says Shepard Fairey, “especially when it comes to human rights.” He’s speaking about the recently vandalized mural of the famous Marianne produ...
Bifido Says Goodbye to Sochi With a Big Gay Kiss
It was such a short affair, just one of those things. Italian Street Artist Bifido has the last word on street about the Sochi 2014 Winter Olympics with two guys in Pussy Riot ski masks and boots, an...
Damon Johnson and Jewels in the Gallery After Years In the Wild
Street Artist Damon Johnson says he loves Dick Tracy and has collected stacks of comic books starring the smart and square-jawed, hard-hitting, fast-shooting, detective who pieces together the clues. ...
Ali Gitlow Brooklyn Street Art Carmichael Gallery Dan Witz Dark Doings Just Seeds.org