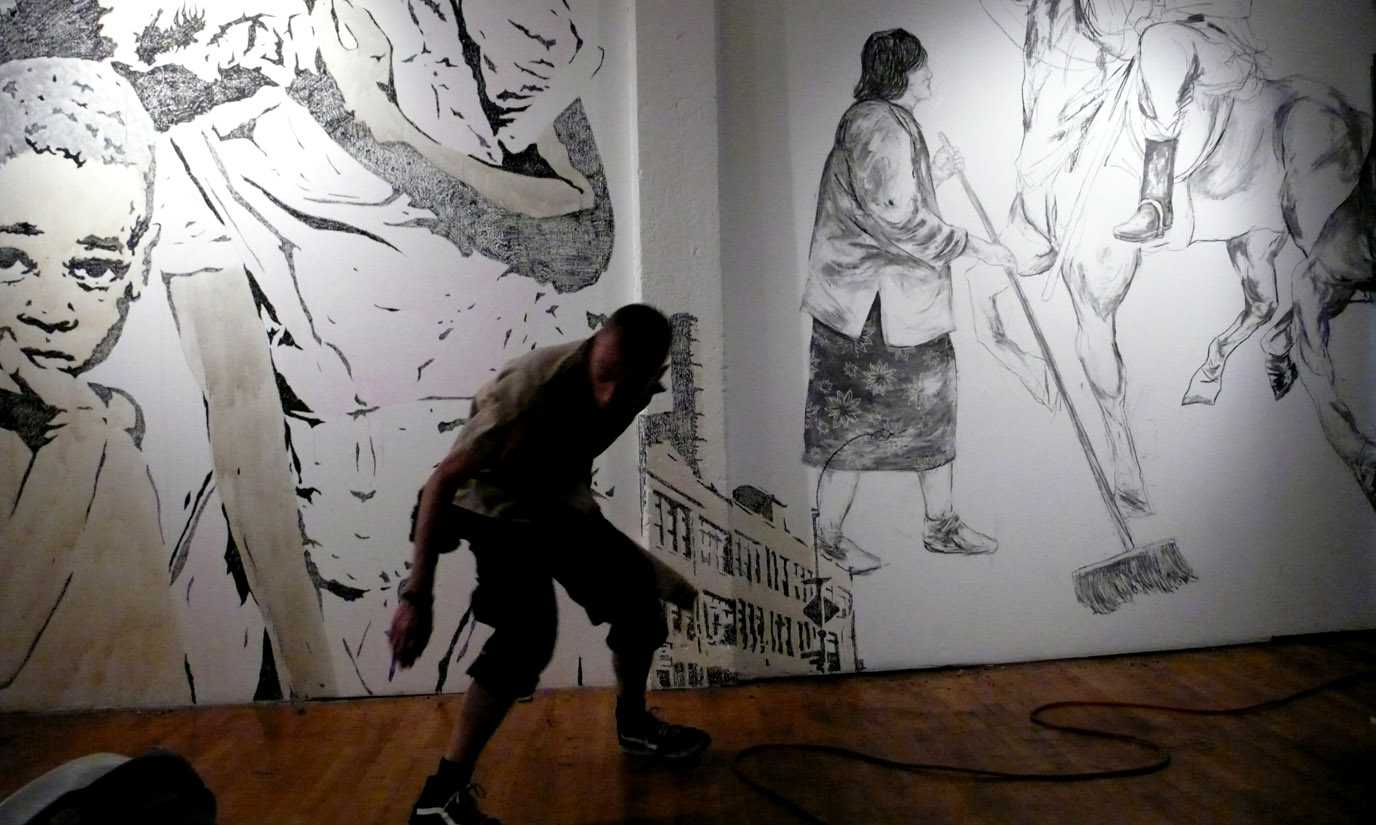 Armsrock in a moment of haste (photo Jaime Rojo)

COINCIDENCE?  I think not.

After lots of pre-planning, conversations, scores of back and forth emails, one big overnight mural, and 10 days of installation in this much respected gallery, Chris Stain knows that the show will mean different things to different people,

“It’s always subjective how people take things, when they see them.  If they hear a song, it’s going to mean something to one person and mean something different to somebody else.  I kind of think that’s the way it is with the artwork. I don’t really have any expectations or want anybody to get anything out of it more than “Here’s two people that give a sh*t about what’s going on around them in the world.”

Before you can get to the title of the show, there had to be discussions about a more basic question, says Armsrock; questions like,

” ‘What is love?’ And it’s not addressed so directly here but it’s sort of like everything that goes in here is somehow this “note” that comes out of this process work before the show and all the contemplations that we had and the conversations we had.

“I think we have very different opinions on it, but somehow it’s come together inside this space and whether or not people actually are able to decipher it is another question, but I think there is enough information so there is some kind of discourse that is thrown up in the air regarding themes such as ‘hope’ , which is very much at the core.”

Too esoteric a sentiment for street art? No, this show is knee-deep in reality, and is still hoping for a way out.

Ad Hoc show tonight; “I Know There Is Love”

Lapiz: HO HO HO and a Sad Stencil About Anti-Vaxxers and Hospitals
“This is not a piece about gloating but about the anger I feel,” says street artist Lapiz about his newest public stencils renders beautifully the jarring facts of hospital workers right now in overwh...
Skewville Comes Crawling Back to Brooklyn
"I had to come back...there's no other place on this planet that speaks my language," says Ad Deville, the prodigal son of Bushwick from atop a windy late-winter rooftop, a paint brush in hand. Seems ...
Skount Levitates From Under an Overpass
Introverts of the World Unite! Brother, its hard out here. Not just the economy and the evaporating social net and the haters. But for the introverted types, and there are many in society, just havi...
BSA in Barcelona for Fundacion Contorno Urbano "Mural Salut"
BSA is in Barcelona right now and we are honored to collaborate with Fundacion Contorno Urbano and their project Mural Salut. Working in conjunction with the municipality of Sant Feliu de Llobregat...
BSA Film Friday: 03.13.20
Our weekly focus on the moving image and art in the streets. And other oddities. Now screening : 1. VHILS: Stories Told with Explosives, Chemicals, and Power Tools2. Our Collective Responsibi...
Ad Hoc Gallery Armsrock Chris Stain Jaime Rojo