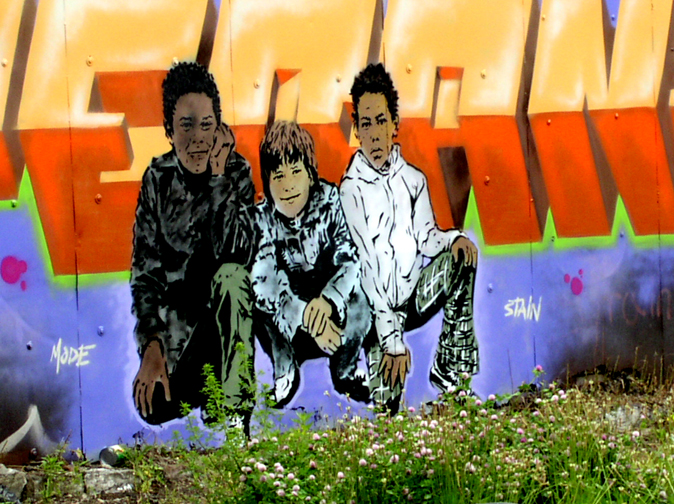 Little bit of inspiration on a whole lotta wall;

This just In, a new giant piece by people’s champion Chris Stain and mild mannered Billy Mode on a sanctioned space in Bushwick called “Esperanza”, which means “I love mac-n-cheese” in Polish, I think. Longtime collaborators and buddies originally from back home in Baltimore, the two knocked out this mural over the Memorial Day weekend.

Brooklyn Street Art: What was the inspiration for the piece?

Chris Stain: My friend Kevin speaks Spanish and I asked him what’s the word for “hope” in Spanish and he said “esperanza”. Since the neighborhood is heavily Latino, Bill and I wanted to do something the people could relate to.

Brooklyn Street Art: Are you seeing “hope” out on the streets these days?
Chris Stain: At times. The idea with this piece is to inspire hope. Just like Whitney Houston said, the children are the future.

Brooklyn Street Art: Those are some dope letters, like they were carved out of blocks….

Chris Stain: Bill is a pretty sharp cat. He devised a template that would help speed up productivity as well as accuracy. The wall is 52 feet wide by 10 feet high. The rectangular shape he drew up and cut out of cardboard was made the width of a single letter (about 5 feet), which made it easier for us to center the piece and for bill to sketch out each letter. Letters are made up of shapes like everything else so he broke this particular letter form down to its most basic shape and we worked from there.