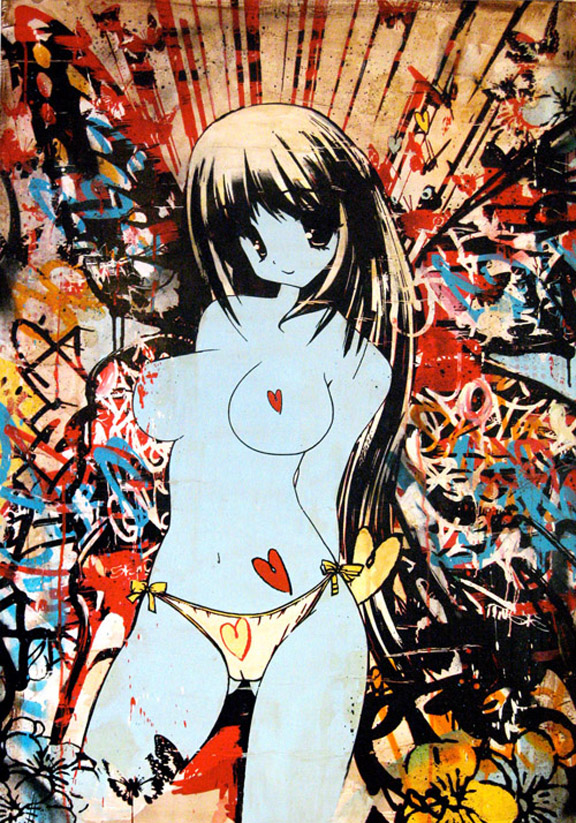 US solo exhibition of work by UK artist HUSH Opens

out of molding clay and tempura paint …. and you managed to turn yours into a U.F.O. and also include pipe cleaners, feathers, and Amy Knickerbockers’ reading glasses into your design?

Mr. Hush understands you. He knows that there are just too many ways to let the creativity flow, and refuses to be pigeon-holed into one technique. Invite him to come play in your studio and he’s going to fly around the room employing whatever materials are available.

Starting Thursday at Carmichael Gallery Hush will be showing new chaotic cleverness that will include Acrylic Paint, Screen Print, Spray Paint, Ink, and Tea on Canvas and Wood as well as a site specific installation. That’s just the way he rolls. While simpleton’s are busy defending their chosen category of expression and expounding on it’s meaning and rightful place in the annals of the street, Hush says, “Let’s combine them all”.

Thankfully, he’s not just youthful energy on the loose. He has some serious chops behind his promises, and the resulting work very nearly vibrates off the wall.

Hush took a few minutes away from the cans, stencils, paint brushes, and wheatpaste to talk to BSA about his inclusive approach:

Brooklyn Street Art: How long have you been an artist?

Hush: Well I’ve always been an artist in some form, or certainly always creative – it’s a lifestyle, I don’t think you choose art, its something you do, it is life. Well my life.

Hush Smacking up a Wall with his everything.

Brooklyn Street Art: Sometimes it appears that your work is riding the line between graffiti and street art; do you make a distinction between the two?

Hush: When I make my art I try and translate my interest in tagging, graf, decay, street art aesthetics into my work and juxtapose it with images of beauty, sensuality and the female form; allowing the later to be scene in a more positive way. The act of a tag or graf is no doubt beautiful in its own right but fusing the two together in an expressionist action creates something in its own right and puts questions out there.

Tagging, Graf, Street Art and art; each is always a choice, an action. It’s the context or location (in which appears) that changes its comment. I think it can work on so many levels.

Brooklyn Street Art: Similarly, elements of Eastern and Western culture dance together in your work…

Hush: Working and traveling through Asia had a huge impact on my life, my views and how I think and view life. I’ve always been interested in the way both the East and the West adopt each others’ cultures. The mix is almost fantastic.

Kimonos, Comix, and Calligraphy all come into play (Hush)

Brooklyn Street Art: Do people ever make references to Faile when they talk about your stuff?

Hush: In the past Faile has been mentioned especially when people first saw my work. It was no surprise, but Faile are Faile, end of. Do I love they work? Yes. But I’m not going to stop something that comes naturally to me because another artist has played with similar imagery or aesthetics. I’m pretty sure we are probably turned on and inspired by the same things visually. As my work progresses I would hope people realize that my work exists in its’ own right.

Its probably because of Faile that my work has been noticed in the first place. That’s how art movements work anyway… look at any art movement through history. What Banksy and Faile have done for the street art movement is amazing. It helps generate a worldwide community through a general interest and love of art which isn’t stifled by the elitism of the general art world.

Brooklyn Street Art: What part does decay play in your process?

Hush: Decay is an important influence (direct from the street, its natural, beautiful) as are any of the D’s; Deconstruction, Decollage and so on. When I start a canvas I suppose my work is quite expressionist and free, I tag, graf, throw paint at it, whatever and generally just f**k it up, its about energy. I do everything to the piece till it feels right. The piece finds itself eventually and then the work begins it’s natural thing.

Brooklyn Street Art: Would you call it collage?

Hush: No, even though visually it can look like that and I do draw influence from the ideas of collage. I use complicated processes by overlaying different mediums – its really complex how the work’s put together. I utilize nearly every way of placing paint onto a medium as is possible through screen print, paint, spray paint, acrylic, oils, inks and then also taking that off – removing it again and building the image up from scratch so that you get a different appearance. Each process allows it to look different. It’s about mark-making ultimately.

Brooklyn Street Art: You probably have poured through many magazines and comics. Which one’s do you keep and treasure?

Hush: I know that people generally think I’m a manga head but the girls are used as a contemporary use of a female form/women in art, mangas more an inspiration rather than a interest. I used to collect graphic novels and comics in the early 90s I suppose I was precious and still have them in mint condition, especially anything by Simon Bisley.

Brooklyn Street Art: Thank you very much for your time!

Hush: Thanks for taking the time to do this also guys.

‘Hymn to Beauty’
A solo exhibition of new artwork by HUSH

Carmichael Gallery of Contemporary Art is proud to present Hymn to Beauty, the first US solo exhibition of work by UK artist HUSH. An opening reception will be held on Thursday, March 5th, 2009 from 7.00pm – 10.00pm, with the artist in attendance.

Deep Purple was cool, but this updated version is fun too:

NUART 2014 x BSA Update 3
On this third day at NUART we'd like to bring you a bit of the good humored craze that's happening right now as some of the artists are finding their spots. We also wanted to give a sense of the exi...
Images of the Week 03.06.11
Our weekly interview with the streets also wanders into a few Art Fairs this week as many Street Artists were in town showing studio work and getting up on walls.  It was great to meet so many ...
BSA /Urban Nation Berlin "Picks for Miami Art Basel 2016"
It's the annual peregrination from Brooklyn to Miami after the Thanksgiving holiday to see the sand, the surf, the aerosol masterpieces. For readers who have witnessed the growing spectacle of the Str...
Technology, Festivals, and Murals: 15 Years on the Street Art Scene
It’s good to be asked to write an essay once in a while as it makes us take a step back and more fully examine a topic and appreciate it. On the occasion of Nuart’s 15th anniversary and it's accompany...
Dan Witz is Doing Dark Things in West Hollywood
You’ve walked by his work a hundred times on the street in plain view.  No really, you probably have, and didn’t know it.  Dan Witz specializes in detailed work that when fully realized, can be be e...
Carmichael Gallery Hush Hymn to Beauty