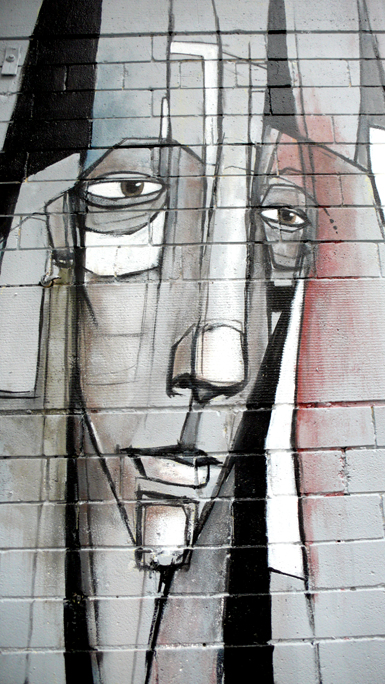 Damon Ginandes Brings Everybody Inside

A smoldering volcano for street art and artist culture in the last couple of years, Red Hook, Brooklyn provides fertile post-industrial soil for an actual growing bohemia. Thanks largely to its’ difficult accessibility by public transportation Red Hook is having an additional millisecond to germinate as a creative utopia before gentrification paves it.

Ginandic Figures in the Window

Brooklyn-based street artist Damon Ginandes hails from Red Hook and gets up in a big way; You might have seen his giant murals on Degraw Street in the last year –12′ tall and 60′ long (spray paint and latex acrylic); backed by an uncommon sight of figure-adorned windows in an abandoned building, perhaps a prescient preamble to the Electric Windows installation in Beacon NY this spring.

Recently sighted by Juxtapoz as an emerging artist worth noting, Ginandes for the first time brings his work into the air conditioning at the Williamsburg whitebox Artbreak Gallery. This premier solo show using Murals, canvasses, relief, sculpture (wood and wire), latex acrylic — is a solid introduction to his mixed media chops and to a finely drawn world.

The style of rendering, the elastic scale, and forlorn expressions are part cubist portraiture, part “Nightmare Before Christmas”. Having worked in film post-production the past few years, Ginandes is now pursuing his original love (and education) and is doing his art full-time.

As with his street work, “Dimensionals” is viewed best in person – line drawings and washes of figurative schemes that might once have been secreted away in your coffeehouse journal now literally burst out into 3-D.

The inner life of the sketch book comes to action, figures refusing to be constrained by canvas; craning their craniums atop long necks nearly bending into one another. These inanimate animations are multiple characters from the same family (or geneticist lab), gawking wistfully and wanfully at you, or blankly somewhere else; their gender not quickly discerned.

Brooklyn Street Art: How would you describe the figures and personalities of the characters in your work?

Damon Ginandes: In many ways I’m still getting to know my characters. Recently a friend of mine described them “portraits of souls” which I think is pretty accurate. I also like to think of them of distant relatives of ours, completely other-worldly, yet distinctly human. Our culture tends to define identities in a large part by external facades — our social networks, jobs, appearances, etc. — however, those factors tell little about the real being underneath. I try to strip my characters down to their most raw essence. Through their quiet, mysterious expressions, I seek to capture a subtle range of complex human emotions, which allow for a broad range of interpretations, ambiguous enough so that the viewer is left to uncover his/her own meaning. Their similar appearances serve to create a collective emotional effect, however each individual character conveys a deeply solitary and distinct inner world. Also, caught between the 2d and 3d (dimension), the characters themselves appear to be reacting to their own spatial ambiguity.

Brooklyn Street Art: How would you describe the difference between having an indoor gallery show and putting up the giant mural in a public outdoor space?

Damon Ginandes: A gallery is a controlled white space, so you don’t have to worry as much about context… you essentially create your own context. And there’s the converse — the challenge of integrating the public piece into (and hopefully altering) the pre-existing surrounding environment.

There is also the obvious difference that a public piece reaches a much broader range of people than a gallery show does. When painting my mural on Degraw Street, neighborhood kids, truck drivers, construction workers, other artists, locals, you name it, would stop and watch me paint, and provide their own interpretations. That is the best feeling, when people who aren’t ordinarily “art-goers” openly connect with the work — often because they’re the most enthusiastic.

Brooklyn Street Art: What are 3 things we should know about you and your work?

Damon Ginandes:
1. From what people tell me, my personality is quite different than you might expect based on my work.

2. I can’t stand it when people talk about food for long periods of time.

3. Among my biggest influences — Alberto Giacometti, Egon Schiele, Lee Bontecou — my style can also be traced back to my interest in 1990’s NYC graffiti and fascination with the Liquid Television animated shorts of Aeon Flux as an early teenager.

Brooklyn Street Art: What’s coming up for you?

Damon Ginandes: I’m in a group show entitled “Outside In” in London in Oct-Nov with a bunch of street artists from all over the world. I’m working on proposals for murals in NYC and Amsterdam among other places.

“Dimensionals” is showing through September 2nd at Artbreak Gallery

For more on Damon Ginandes work or updates on his whereabouts, see
www.damonginandes.com
His photostream on Flickr is here

Chip Thomas' New Mural, Indigenous People, and #NoDAPL
Street Artist and activist Jetsonorama (Chip Thomas) saw his work pull together a number of people in Durango, Colorado on October 10th as the city and the college celebrated their first ever “Indigen...
A Community Mural Festival in NYC, Highlights From Welling Court 2015
An annual mural tradition of non-pretense, New York hosted the 6th Annual Welling Court mural festival this weekend in a working class neighborhood in Queens, thanks to a grassroots couple who hustle ...
Banksy Hoax, Does Dutch Master Remix of "Girl With the Pearl Earring"
Two things in the news today about Street Art man of mystery, Banksy: Thing 1: He was not arrested, cuffed and covered with a shroud yesterday as reported and re-Tweeted throughout the street-art-isp...
Kosbe: Under the Radar and in the Studio
Why One Brooklyn Stick Up Kid is Worth Watching Sometimes on the street you get an inkling of the future. It could be an overheard excerpt from a cell-phone conversation about a club show the night be...
BSA Images Of The Week: 07.13.14
Apparently there is another spectacular sporting event that's got everyone captivated today and for a couple hours it will be easy to get a cronut or a seat on the subway because people will be w...
Damon Ginandes Mural Sculpture Street Art