Opening under cover of night somewhere in Paris, four stories beneath la rue, a secret subterranean gallery in a sealed tunnel appears suddenly. While activity on the street overhead is hectic and dense with cars, trucks and pedestrians, the dry dust is ankle-high here in this darkened silent morgue, its cool dank air now permeated with fresh aerosol. The Underbelly has been here, and if you discover this curated collection of Street Art and graffiti in the chilled dim light, you are officially lost. And lucky. 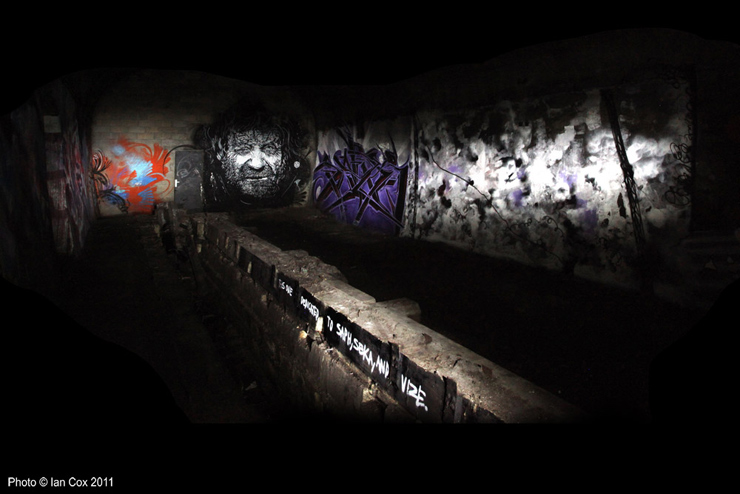 “You start climbing down and it seems like it never ends,” says Workhorse, the project leader who, along with a partner named PAC, has lead wandering artists down a similar path with pounds of spray paint in their backpacks once before, “You feel like your descending into this black pit.” The last time Underbelly appeared, it was in Brooklyn with 100 artists mounting an unsanctioned show in abandoned tunnels during a one-year period. Now these organizers stood in an underground location deep beneath Paris with a tense troupe sworn to secrecy; ten artists, three organizers, two photographers and one writer, converging here from five countries for one goal; to paint walls unencumbered, if quietly, for half a day. 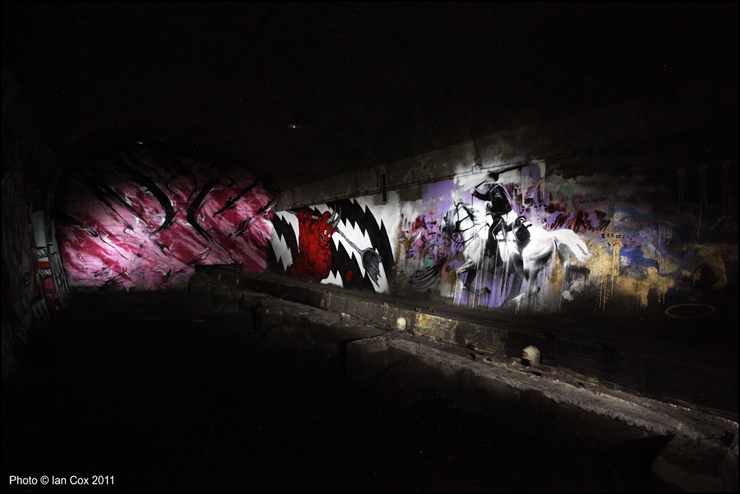 “The mood was a little tense until we were all safely in the tunnel,’ says Martha Cooper, the graffiti and Street Art photographer who has been doggedly pursuing these kind of painting parties in challenging locations for about 40 years. After decades of urban exploration, the world renowned photog with a journalists tenacity recounts stories like this with a glint in her eye and a sort of seasoned glee. “The process of climbing down steep ladders in narrow spaces in the middle of the night felt like a grand adventure.”

For Workhorse, the fear factor felt much more tangible, “If you get seen and stopped, there really is no good way to explain why you’re entering an illegal location with a dozen cameras and spray paint. I think we were all aware of the fact that it wasn’t a time to joke around or fuck up.” 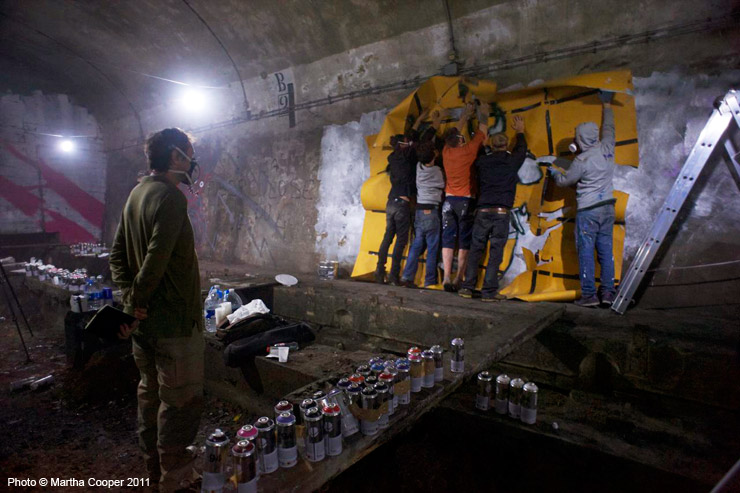 Harnessing the team to help Conor Harrington with his piece. (photo © Martha Cooper)

If you’ve ever tried to organize artists, you know it’s almost impossible, and it always takes longer than you expect, especially when flights are delayed, luggage gets lost, and traffic is thick. “It took us 36 hours to finalize the supply list, get everyone in at the same time and same place and go over the itinerary of how things would work. We met up before sunrise, and made our way into the tunnel,” says Workhorse when describing the corralling of the crew. 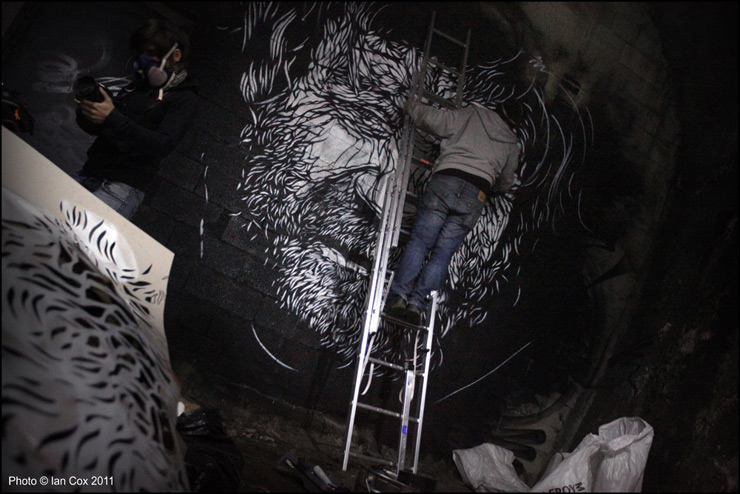 C215 on a ladder with the stencil rolling to the left. (photo © Ian Cox)

The crew for Underbelly this time was a mixture of heavyweights and relative newcomers on the graffiti/Street Art continuum, each with a solid presence in an ever morphing scene; C215, Tristan Eaton, Futura, Conor Harrington, How and Nosm, Alice Pasquini, Saber, SheOne, and Will Barras.  If there was street beef, nobody was showing it. In fact some of the biggest fans of these artists are their peers and many of them were just happy to be in each other’s company for the first time. “I felt very privileged to be a part of such an amazing secretive project in one of my favorite cities. It was an honor to paint with these artists and be photographed by Martha Cooper,” says Los Angeles graffiti artist Saber, whose recent health issues caused the team to craft a contingency plan for one of the intermittent paroxysms he’s had in the last year.

“As real dangers go, these guys had worked out the logistics of how to get me out of the deep hole if I happened to have a seizure. Lifting my unconscious big rear-end up many feet is no easy task. I felt safe with these guys knowing they had looked at all sides of the logistics,” he says, now happily at home. 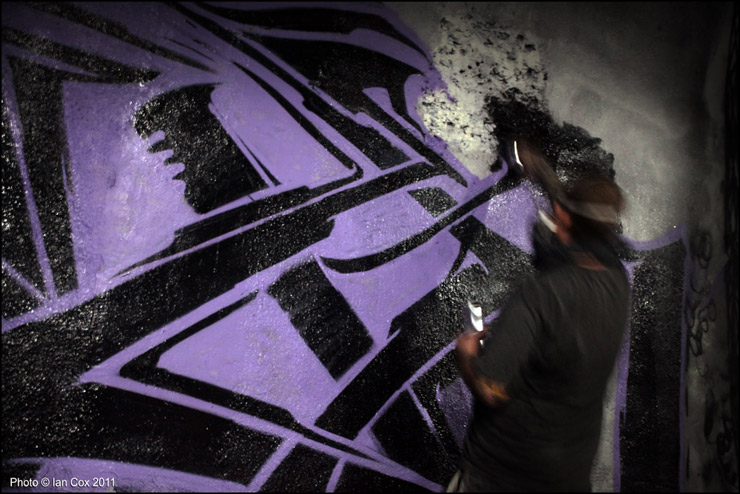 But what about his piece on the wall? How did his painting go? “I was next to Futura, so no pressure there! How and Nosm’s piece along with SheOne`s wall was amazing. My piece wasn’t so fancy,” he explains while relating how delayed flights and jetlag contributed to a painting performance he feels was less than his best, “I got crushed by the friendly competition.” 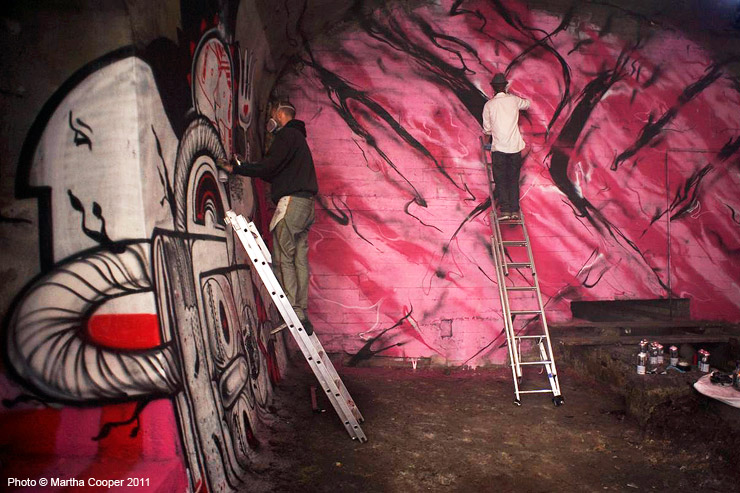 How and Nosm alongside SheOne. (photo © Martha Cooper)

Similarly, the New York Street Artist Tristan Eaton says the poor lighting leaves him wondering what his final piece even looks like today. “My area was only lit on one side, so half of my piece was in darkness while I painted. I planned a figurative piece with mostly dark reds, so how it came out is still a mystery to me. I haven’t seen any pictures, so I’m crossing my fingers that it’s not a total disgrace,” he says only half joking. The guy usually exhibits a technical mastery of the can, so it’s not unusual to hear him talk about taking on a new challenge with gusto. “I was trying to paint the Ferry man from Michelangelo’s Last Judgment in the Sistine Chapel for God’s sake. I’ve been trying to do more figurative spray paint work lately, so I thought I’d push myself. Bad idea. I can normally trust myself to make anything work but given the challenges of the situation, I should have done a classic piece in a comfortable style and called it a day.” 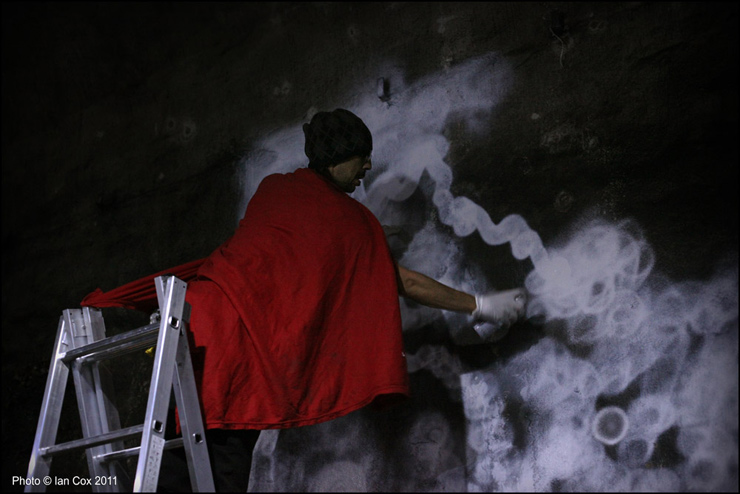 Futura self tethered to his ladder reaching for the stars while painting underground. (photo © Ian Cox)

For the ever sanguine quipster Futura, a graffiti legend whose savoir faire was primed by experience from the moment he arrived underground, his active imagination seemed  enlivened by possibility and fantasy. With an elegant red cape and a can in hand, the graffiti and abstract artist clearly let his mind wander while the groups’ other amazing photographer, Ian Cox, looked for opportunities to capture the action and the attitude of the moment. 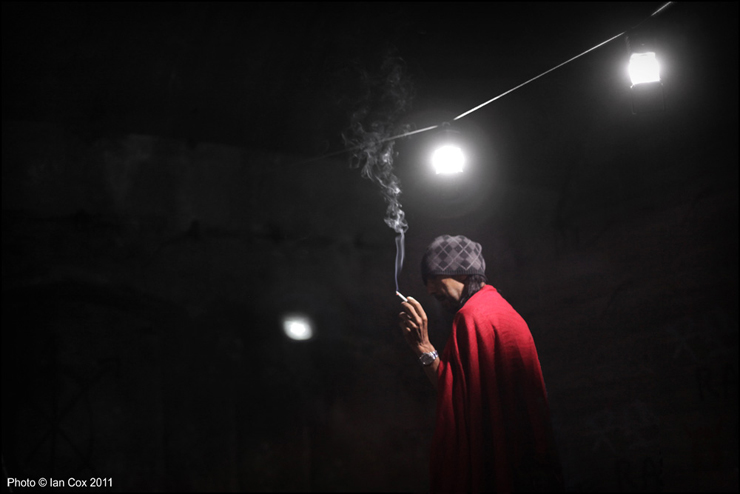 Futura. A stunning portrait of the artist. (photo © Ian Cox)

Four years in the US military will make a man look at this art project as a mission, and Futura was thinking of video games, regarding Underbelly as a real life multi-player call of graffiti duty. “You know it’s one thing to play Modern Warfare 3 Spec Ops: Parisian Metro,” he intoned semi-seriously while talking about the planning that brought him to  this sweet spot to paint, “but the precision and logistical coordination was, without question, a highlight in danger and daring.” 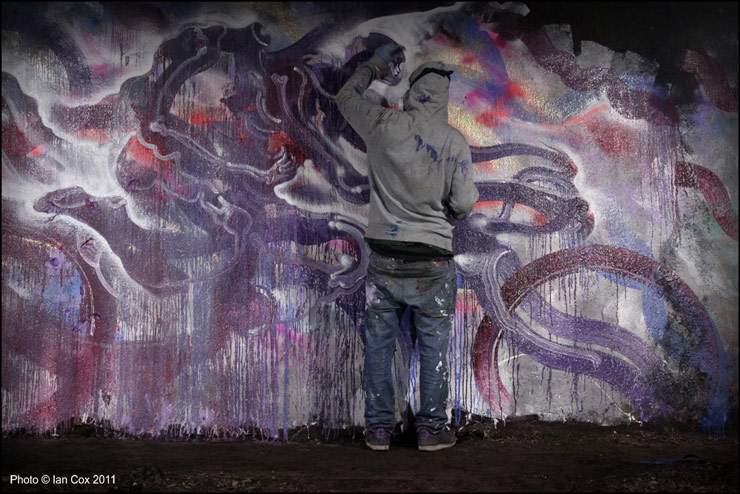 Setting aside heroic associations with the mission, the paintings themselves are imbued with a mysterious quality that is aided by their clandestine location and the conditions in which they were created; There is Connor Harrington’s epic and faceless horseman astride a stately galloping steed, Alice Pasquini’s Pipi Longstocking girl shrouding her frightened face in the corner, and How and Nosm’s sharp swooping symbols, lines and patterns waiting to be decoded. 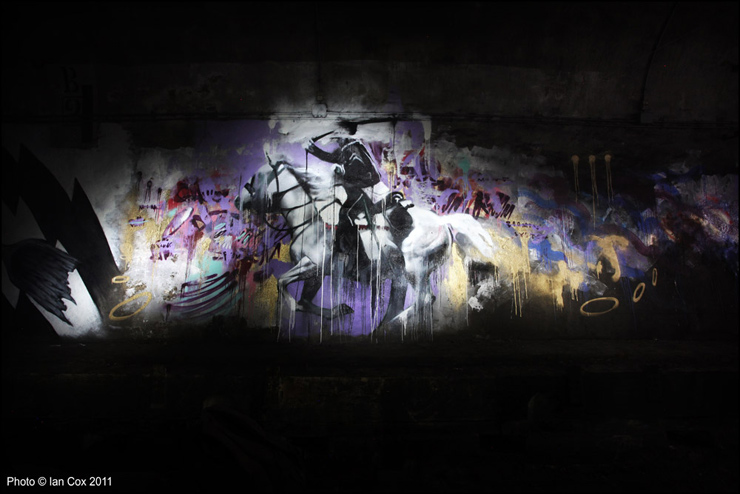 Imagine walking with a flashlight through this tunnel of darkness and discovering the 12 foot high stencil portrait by hometown Street Art star C215 as it hovers slightly above you. The large grizzled face looms as a memory, perhaps a miner or a railroad worker, with one eye closed, or missing. Maybe he is wincing at you because of the thick dust in this airless tunnel. 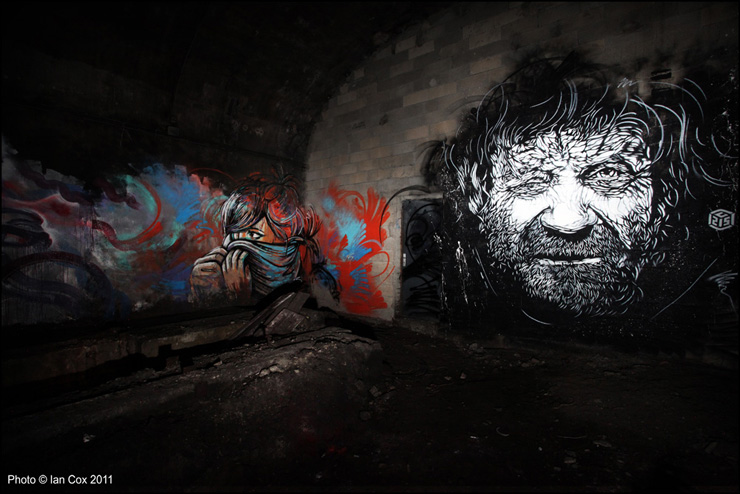 He could be also reacting to the aerosol spewing from many cans spraying all at once.  Advance planning aside, one detail escaped the group; ventilation. While none of the participants we spoke with regrets for a minute the opportunity to bury paintings far below the surface of a historical city that celebrates it’s artistic culture, everyone mentions the fumes.

“The tunnel was pretty much sealed with no ventilation,” Cooper remembers, “Had I not been loaned a respirator, I would not have been able to breathe. The paint fumes accumulated so that there was a visible haze in the space.” 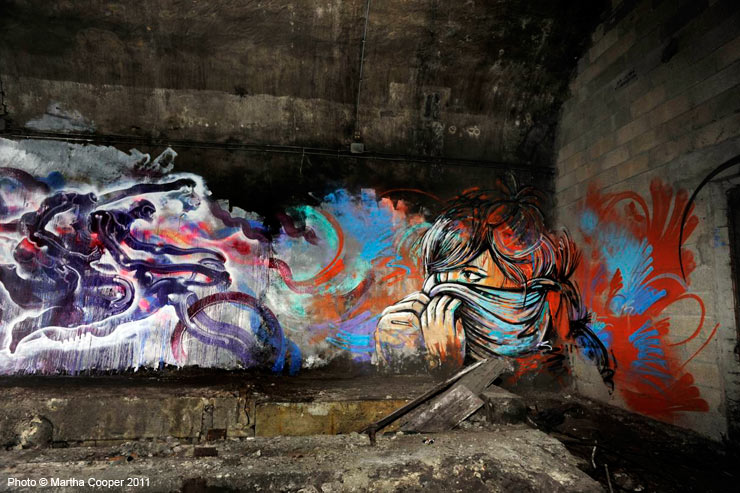 “Inside the tunnel, it became 60% visibility with the spray paint fog with an instant headache wall when you walked in,” says Eaton, “We all felt bad for Saber who showed up last and had to bear the worst of it all.”

Saber agrees, “If you stayed too long you could possibly get inhalation poisoning. Seriously, in my 21 years of painting I have never experienced a wall of fumes like that.”

Curiously, no one bolted from the space and six hours stretched to nine, nine to twelve. After fourteen hours, everyone in the party was exhausted by the stress, the fumes, and the new paintings they had labored over. With completed pieces installed and documented, the crew re-packed their bags and collapsed their equipment to begin their ascent back up the steel ladders to emerge into the streets one small group at a time. 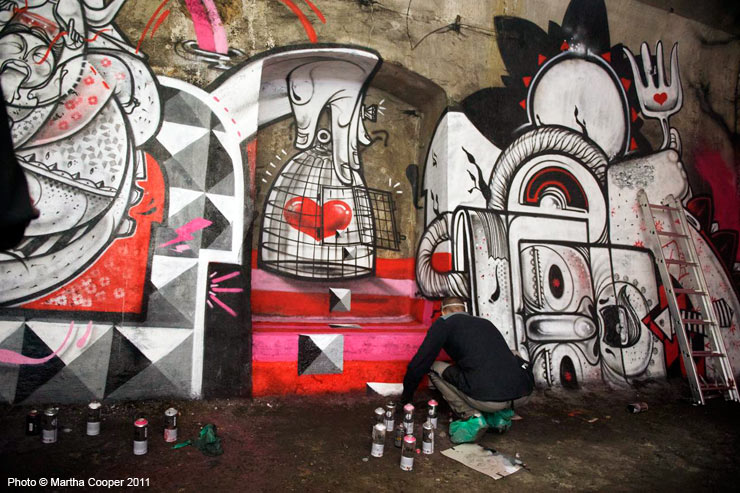 How and Nosm at work. (photo © Martha Cooper)

Brooklyn Street Art: Did you see many rats?
Martha Cooper: I don’t remember seeing any rats.
Workhorse: Nope, usually rodents are in active areas because they are looking for food. We were in a section that hadn’t been used in decades so there was no sign of life there.
Saber: No, but I was searching for as many Space Invaders and Horfe pieces I could find.

“After being in the drafty tunnel we were all a bit dried out and hungry,” says Workhorse when describing the scattering of the team once they hit the street. Above ground they  were much more relaxed, and sleepy. But not everyone hit the couch. 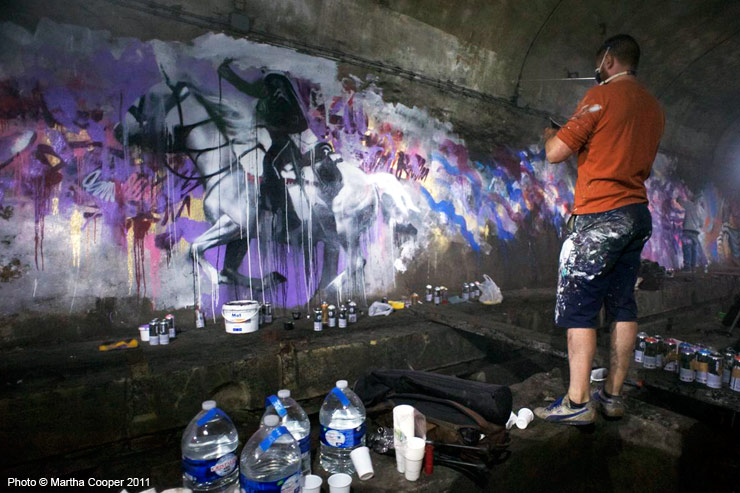 Says Eaton, “We were all doing what we love doing more than anything in the world. We got three blocks from the tunnel and ended up sitting down for five cold beers, covered in black dirt from head to toe. The buzz from the experience was strong. Most artists covet the moment when the work is done and you sit back to reflect on what you did with the weight off your shoulders. This was that moment times infinity.” 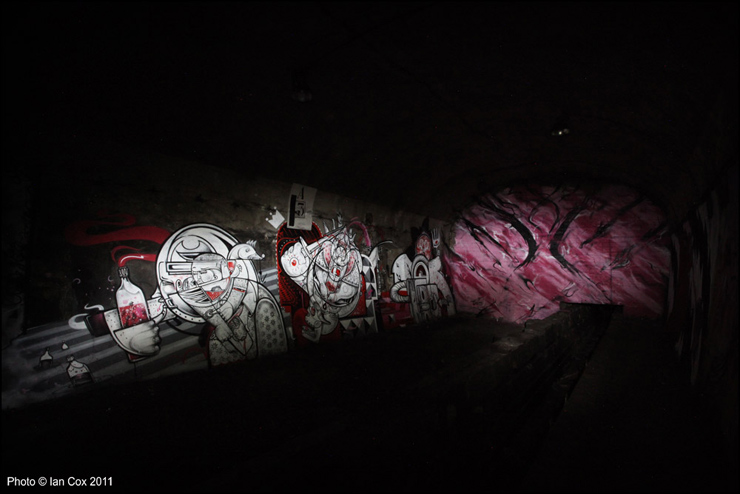 From left to right: How and Nosm and SheOne. (photo © Ian Cox)

See our interview with FUTURA here on Brooklyn Street Art.

Read our conversation with HOW and NOSM on Juxtapoz here.

And our conversation with C215 on Juxtapoz.

Read all BSA pieces on The Huffington Post HERE.