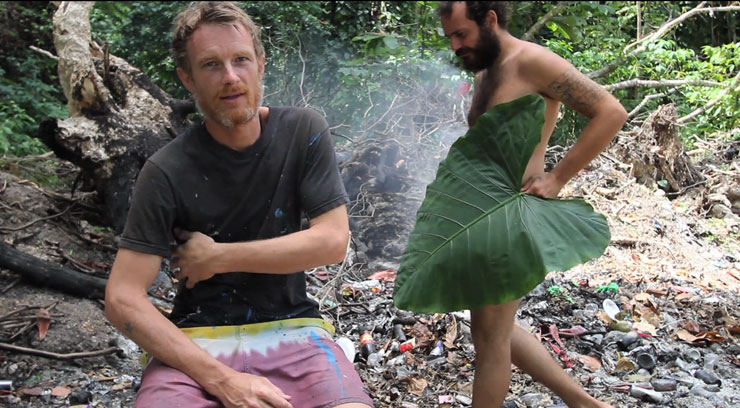 Now screening: MOMO in Jamaica and Cuba with Angelino, POSE and REVOK in NYC, Ian Strange AKA Kid Zoom and “Suburban” project, and “The Story of The Fisherman”.

FAME Festival impresario Mr. Milano just released the completed video diary of his trip to Cuba and Jamaica this spring with Street Artist/Fine Artist/Abstract Painter/None of the Above MOMO. The color, patterns, and expressive people are rich, as are his observatory reveries – all strung together as a culmination of many creative interludes recorded in his personal style and edited together as a road-trippy and happy paintcation. Don’t let the 20 minute length deter you, this is as good as going on a vacation, but you can’t go because you are stuck at your desk aren’t you. Well, this will help you pretend. Guarantee.

The Seventh Letter crew gives you a nice recap of some of the street and gallery action a month ago for Revok and Pose’s New York visit. Most illuminating are the two soliloquies of the artists during the opening as they deliriously ruminate on their method of art making and the philosophy behind the name of the show.

REVOK AND POSE and the Transformation of The Houston Wall

Repositioning himself as cultural critic behind the lense and in front of it, Kid Zoom targets the pleasant mythology that served as iconic foundation for the middle class that blossomed in first world countries after the second world war, the aspirational quarter acre tract in a grid full of nearly identical homes. Part examination of the fiction perpetuated, part target practice at perhaps his own youth, the “Suburban” project is ready to demolish what’s left of that neighborhood feeling.

“The Story of The Fisherman”

Street Artist and illustrator Vladimir Chernyshev discovered a low cost D.I.Y. way to make a story slowly animate and shares it here in “The Story of The Fisherman”. Don’t expect explosions, or even one quick edit – this slowly advancing diorama peaks your imagination as remembered in a childrens storybook – almost brooding, yet incandescent.

The St. Petersburg based Chernyshev explains how his short story about one man’s disappearance was hand-drawn, hand illuminated, and very gentle advanced.

“At the time of the film’s production I used a self-built wooden box with a glass screen atop and candles at the bottom – that caused the light to fill the carbon-paper. The image was made by erasure of the paper’s upper layer with a metal stick. A simple mechanism slowly rolls the tape of 12 meters through the glass screen showing the lighted erased parts of carbon-paper.”