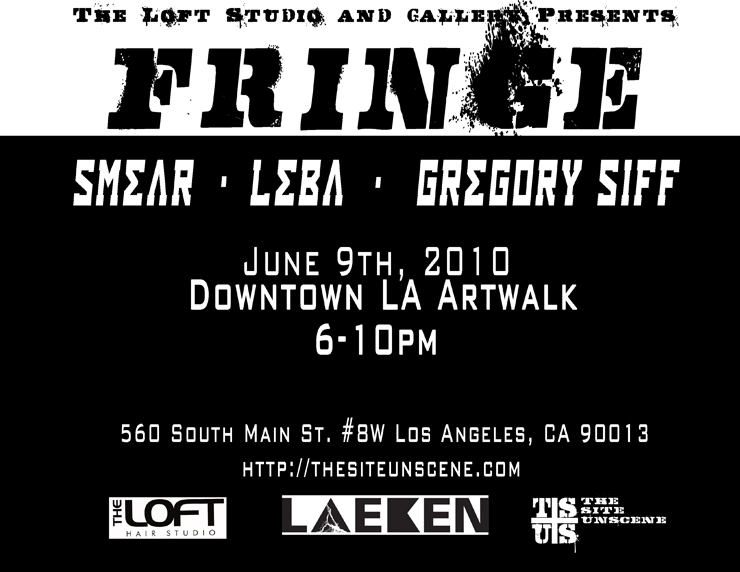 Los Angeles, California, 2 June 2011 – On June 9th,The Site Unscene in conjunction with The Loft Salon & Gallery brings you the first in a monthly series of art shows to open during the Downtown LA Artwalk. The series will kick-off with street art show FRINGE featuring the work of Smear, Leba and Gregory Siff.

Smear, Leba and Gregory Siff are three of the most notable street artists in Los Angeles. Each will all be presenting street influenced artwork on June 9th at the opening of FRINGE. Not allowing themselves to be marginalized by accepted norms or considered secondary to any art movement, these three artists all bring a unique voice and style to the public eye.  Never letting fear of adversity, or conformity, influence their artistic visions, these artists persist through their work for FRINGE, a curated collection playing on the concept of ‘marginalized’ society in it’s various forms.

Smear: Cristian Gheorghiu’s (aka SMEAR) visceral, highly personal style of painting emulates the messy workings of the total-information age, layering forms and images with powerful, slashing brush strokes of rhythmic, unifying mixtures and improvised, frenzied lines coupled with brilliant color to achieve a simplified language. Gheorghiu counters his free, muscular brushstrokes by loading his paintings with rags and tatters of cloth, reproductions, fragments of comic strips, and other collage elements of waste and discarded materials to convey maps of mental states. More info on Smear here.

Leba: The artist Leba has been active in the street art scene, from the West to East coast, since the beginning of last decade. He is recognized and admired for combining biting social commentary and fine art imagery into both his street art and fine art.  HE is unafraid to speak his mind with a spray can as on his highly controversial, yet loved, Census billboards and much lauded American Apparel advert takeovers.  His street art is always relevant, exploratory, skillfully crafted, and many times, politically charged. He is skilled in many mediums: sculpting, wheat pasting, stencil cutting, painting and he skillfully conforms each medium to the needs of each individual piece. It is this combination of intelligence and raw talent that has made him one of the most admired and intriguing LA artists around the globe. More info on Leba here.

FRINGE  is presented by The Loft Hair Salon & Gallery located in the heart of downtown LA eight stories up. The 1500+ square foot space offers the perfect view of downtown life while showcasing the best of LA art life indoors. More info here. 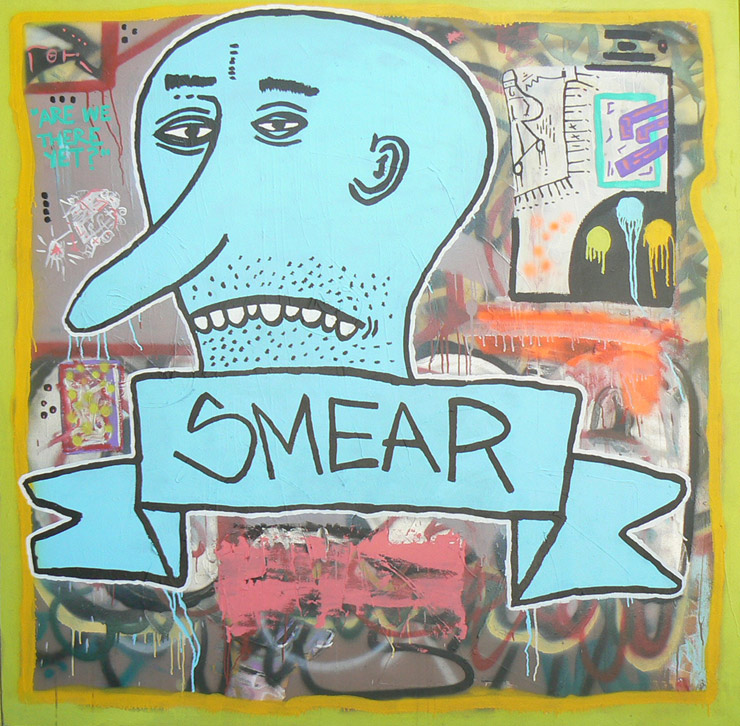