Plowing grandly through the intersection of Street Art and consumerism mockery, satirist Street Artist Hargo took his ongoing joke “Cash for your Warhol” to billboards of Miami during the art gleefest that is Art Basel in December. Usually relegated to plastic prefab signs artfully nailed to telephone poles of empty lots and main thoroughfares, Hargo took out giant Out Of Home billboards to “advertise” the services of a fictional art buyer who is happy to help you unload those onerous Warhols just laying around the house for cold hard cash munney, honey. To celebrate this installation in Miami’s un-toniest district, Wynwood, the BLDG is releasing this print of a billboard by the street’s most famous Warhol appraiser, Hargo. The new piece entitled “CFYW, 14th Street, Miami”, is based on one of several installations viewed by the art loving masses who engorged themselves with edgy street art culture during the visual feast that takes place every year in southern Florida. Hargo and The BLDG concur that the legacy of this epic install should live far beyond the reaches of Basel and, thusly, history has been made. 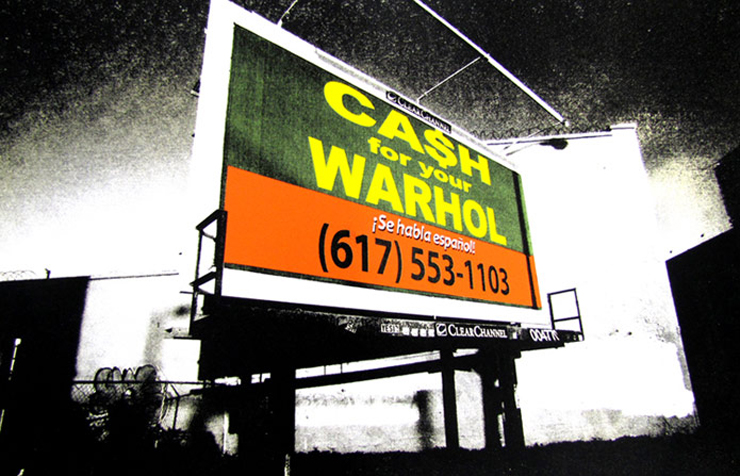 “In addition to putting up a bunch of street signs, Cash For Your Warhol took out billboards in Miami in December during the art fairs. The BLDG took one of my photographs of the one on 14th Street (shot before Poster Boy co-opted it – insert smiley face here) and turned it into an image suitable for framing. They have previously done a bunch of prints with Street Artists including The London Police and Cleon Peterson. It’s my second print with The BLDG, and I think this one definitely lives up to their high standards. BTW, the CFYW hotline has been flooded with calls since the Miami installation and the calls are still coming in. Apparently billboards work pretty well getting the message out” ~ Hargo

To see Poster Boy’s “collaboration” with Hargo click on the link below: