Happy Easter to all the Christians! Happy end of Passover to the Jews! – and welcome to a new spring of spiking daffodiles and spiking Covid cases in New York City even while the age for vaccinations drops to 16 this week. The graffiti and Street Art is blossoming under bridges and in empty lots, as are the much needed $1400 checks and PPP loans are blossoming as well. They are meant to keep us all barely above water, which is where many New Yorkers are financially.

Maybe the trillions that Biden and Yellen and the banksters are suddenly printing will lift us, or maybe instead they’ll just trigger hyperinflation so your savings will be worth ever less? Perhaps we could require corporations and the rich to pay their fair share of taxes – or any at all? Secular heresy to suggest such a thing!

Ahhhh, but the streets! They are still alive and well, and budding with small hand-made one-off pieces, multiples, and murals. Not quite a renaissance, but we are seeing a sincere march forward by all many of artistry in the shadows and in the broad daylight, even as Rome appears to languish.

Saturday projects around the house or apartment as the seasons change? Why not paint your steps?

Italian designer, muralist, and graffiti writer since the 1990s, Nico Lò (Skolp) shows us his style on the elevated art of painting a public stair in Santa Croce di Magliano (Italy). The color blocking is more intentional and scientific than you may think, however, and the artist tells us that he used a software tool to determine the composition in collaboration with a San Franciscan machine learning expert named Piero Molino.

“Much attention has been given to the use and perception of colour,” says Nico. “The observer perceives two coexisting paths on the staircase: the one with softer colours makes it easier the upward path; the other one, with more saturated and bright colours, marks the easier downward path.”

Since being a graffiti writer, Nico has gone through many personal and professional stages in development of his art – including starting a design firm with two friends in 2008 specializing in visual communication and graphic design. Now he’s more attracted to something many are calling “Post Graffiti”, a deconstruction of the letter-based vocabulary in a way that tumbles into abstraction and geometric movements of many directions.

“For years he focused on the study of the letter in all of its forms,” says a publicist. “Until overcoming the concept of “tag” and taking the path of a new approach called post-graffiti. His artistic language is characterized by geometric shapes, grids and shades, an abacus of elements and compositional rules that refer to the concept of generative design.”

This new staircase piece is part of the ongoing project, the Antonio Giordano urban art award (Premio Antonio Giordano), now in its 7th edition, which comprises 40 works in public space in the city.

Both celebrate the power and expressive ability of the letterform and yet each appear as entirely separate pursuits. Uniting them requires understanding both very well, contemplating their friction, their possibilities, and a lot of negotiation.

Since 2007 Niels “Shoe” Meulman has been investigating, experimenting with, enraptured by this pursuit. From thousands of hand sketches in his black book to the full-body immersion techniques of creating across large walls and floors, using paint and brush by the gallon in premeditated/subconscious all-inclusive gestural choreographies. Shoe knows how to stay in the moment.

It’s this elevating together of disciplines that reveals their contrasts; awakening the inner conflicts and core strengths, parading them on view.

He discovered the perfect transmutation here in Brooklyn. It was that night of art-making with Haze that was a turning point..

“We both decided to go to the art store and get a whole lot of tools and stuff and just started working to see what would come out,” he says as he glances out the brownstone window at the pile of recycled cardboard in the tiny courtyard. 26 years as a writer from Amsterdam who had met his New York graffiti heroes like Dondi, Rammellzee, and Haring, Shoe had pursued a career in and was still in love with fonts and their power to communicate.

“Without a commission, without a brief,” he remembers. “And like that – my old passion, calligraphy, mixing with graffiti, just came out!”

Shoe says he created “calligraffiti” and he ran with it: developing a body of work around it, writing a book about it (Calligraffiti), collaborating with a growing number of artists who also had an affinity for the penmanship of an artful communication modality that spans centuries.

He has developed brushes, tools, techniques, opened a gallery in a garage (Unruly), covered surfaces from cars to museum walls, finished three more books (Painter, Abstract Vandalism and Shoe is my Middle name). It was as if he had finally decided at 40 that it was okay to be an artist, and he left advertising to dedicate himself fully to his craft.

“Because my dad is also an artist- maybe I was finding the right moment to be an artist,” he says as he shows you a stack of many papers from the art supply store, and he contemplates why he had hesitated for years. It’s not that he was concerned about competing with his father, but the stakes were high. Speaking of his father, he says, “I think he was thinking ‘if you’re going to be an artist you better be a successful one’ – because being a struggling artist – that’s the worst!”

Additionally, he thought that before he could call himself an artist, he should have something substantial to show. “It also felt like there was something more profound to it,” he says. “I always thought that to be an artist you have to have life experience and have some knowledge and purpose to bring to the table, you know?”

Whether wide tip, wide brush, or wide cap, the bending letters are cryptic and stern in their old-worldliness. Fluid and stilted, wild and ornate, gilded, in black, in , in silver and gold. The additional layers of ink burst violently with destructive force in the swipe, the slash, the bash. The splatters are sometimes built up like an aura that glows around the cavorting dark letters – as if bruised and pummeled, their damaged and moistened epidermis now sweating black blood, infusing the air with a miasma of industrial soot.

With broad interests that delve into abstract, into wordplay, even poetry, this moment is the clarity in early morning fog on a quiet street in old BedStuy, now rumbling with the sweet sickness of gentrification. The residency that brings him here is so named to recall history and to look forward, offering a respite for many a visiting Street Artist.

“I didn’t really have a plan when I came here but, like many times, I come up with something on the plane like the day before – and of course it’s brewing in my head.”

He points to a couple of handled black plastic shopping bags that he has tacked to the wall. With a capacity to recognize and understand his own emotions and the emotions of an era, he has connected to the pleasantry printed on them “Thank You for Shopping With Us!”. It’s not just the sentiment that captures the late 1970s design hand, for him, it’s the upbeat openness and lyrical bending of the letters and lines that attract him.

The letters are sweet like cherry lip-gloss on a rollerskater in hot pants in Central Park. Suddenly you are flipping through the pages of Eros, Fact, or Avant Garde, a relief of melodic line and sexual liberty.

“Thank you for shopping!” he exclaims like a fan. “That’s so New York for me; that’s exactly graffiti – that 70s Herb Lubalin look,” he says of a time when magazines were so head-over-heels in love with new type treatments that they might feature a 2-page spread of it entirely just for you to salivate over.

“It’s free,” he says, perhaps reflective of the liberal sway of social mores and the swinging romance that advertising had with the Baby Boomer’s ‘me’ generation of the seventies. It’s a phrase rooted in consumerism, cities were in the last throes of an ample middleclass America who had cash and credit to shop with.  That fact contrasted with the suffering of a bankrupt NYC – a spirit that inspired train writers as well, even if used as critique.

“I think the whole graffiti scene that started here had something to do with this sort of lettering,” he says. “It came from that freedom that you could see in advertising. The design was so good.”

For now, this month-long residency is a reprieve for Shoe, a time to examine and relax into the spring that gradually warms New York and brings rose blooms to the bush in the small front yard of this residential street. His new sketches from his black book contain pithy barbs, hidden meanings, pop-culture references, and life truisms drawn in what he might refer to as a monk-like manner.

“I’m not religious. I don’t follow any religion and I don’t meditate but I like this idea of knowledge and introspection,” he says. “This is where Chinese calligraphy comes in and you are reminded of the medieval monks and all kinds of calligraphers”.

A congenial host, Shoe shows walls full of new pieces, individual words or phrases on a large variety of papers, textures, stocks. He describes his inks with as much enthusiasm as his personal relationships, which are sometimes as tumultuous as the intense splashes of midnight here. You can see there is definitely work being done.

“That knowledge comes from that kind of introspection. The influence of Japanese and Chinese calligraphy comes in because at that time if you were by yourself writing…. Those monks either wanted to be enlightened or were enlightened in some way; it’s a search,” he says.

Street Artist and Fine Artist Isaac Cordal’s new installation in Milan for Venduto 3 meditates upon the theme of the failure of our leaders to do what they are supposed to do: Lead.  If the people in the streets this year from Cairo to Rome to Athens to Paris to LA to New York are indication, leadership is in crisis around the globe. 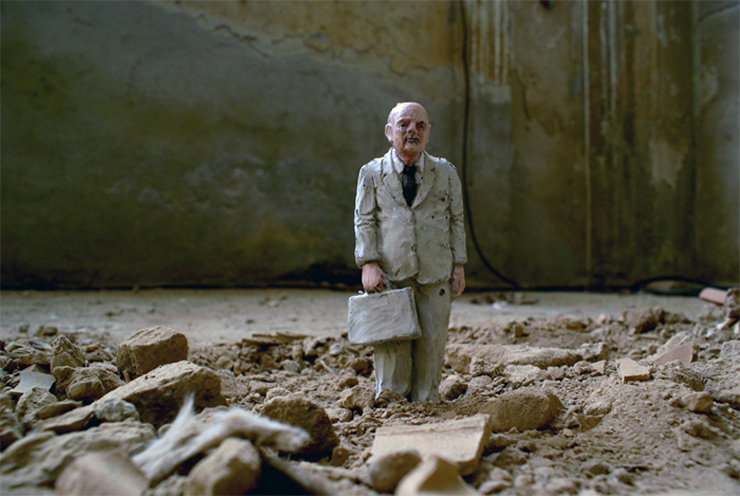 Among the paradigms that are shifting, first world cultures are also watching some evaporate. With his droll knack for set design, Cordal continues to place his business man sculptures in the man-made environment to create scenes that tweak perception.  In these new images, the myth of the paternal employer continues to crumble and Cordal’s miniature loyal “organization man” plods forward unthinkingly with shoulders slumped even as he descends into the rubble. 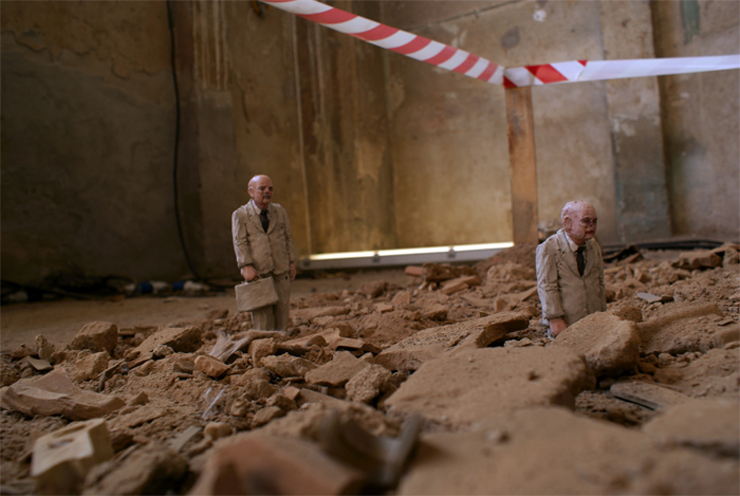 “Follow the leaders, is a reflection about how our leaders take us to a dead-end. This is a group of businessmen following the economy like automatas.

A mass of men stuck in the rubble of a civilization whose foundations are shaking” Isaac Cordal.

To continue reading and to see the full set of photos of the installation go to: http://www.isaac.alg-a.org/Cement-eclipses-Milano#IMG/jpg/1-2.jpg