In a few weeks the former Donnell Library on 53rd Street across from MoMA will be host to a grassroots funded and curated historical view of New York’s art from the streets. That phrase is specifically chosen by the show’s curators, Joyce Manalo and Daniel Feral, as an inclusive term for all manner of public art on the streets here since the 70s including graffiti and Street Art.  A show visible through the giant windows from the street, Pantheon will feature live performance as well as installation, printed materials for you to read about history, guerilla librarians, and incognito street docents – a sparkling job description that sounds like a naughty librarian fantasy involving Julie Andrews.

We recently spoke with one of the exhibiting artists of Pantheon who goes by the name Adam Void (or AVOID pi) and who plumbs the murky depths between fine art, graffiti, and Street Art with no apparent desire to align himself with any one of them. An experimenter and explorer, a lot of his early stuff looks clearly like a small survey of graffiti’s modern vocabulary. Sometimes raw gestural markings with perhaps cryptic meaning, his love for symbolism, data, abstraction, wordplay, and a recently begun formal art education all are a swirl inside his head. Where it all settles will be a surprise to everyone, including him. This search also seems emblematic of the moment.

A wisenheimer of the highest order, he describes himself this way; “AVOID likes to take long walks on the beach, riding freight trains, and destroying the dominant paradigm.” We’ll just say that he’s a rebel inquisitively looking for a cause, making art along the way. 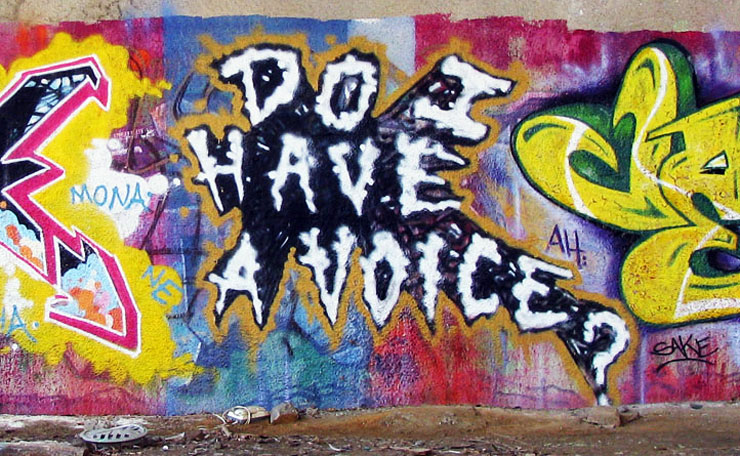 Avoid “Do I Have a Voice” (photo © Mike Sachse)

Mr. Void spoke with Brooklyn Street Art about labeling art movements and the current state of a very fluid story of art on the streets and in the galleries.

Brooklyn Street Art: As you look at the evolution of graffiti and street art some people have observed that there appears to be an erosion of once distinct practices. Where do you see these two going at the moment?
AVOID: The distinctions between the two genres are disappearing. Graffiti Artists are becoming multi-media with the inclusion of zines, posters, stickers, rollers and blasters into the already full table of tags, throws and pieces. Street Artists are experimenting with the use and importance of signatures as well as expanding into sculpture and video. Both groups have a dialogue on the streets and in their personal lives. Recently Graffiti and Street Artists have shown their fine art together with many big name art world’ers at big name galleries. This is an exciting time for the intermixing of worlds.

Brooklyn Street Art: Is it crucial to the understanding or appreciation of someone’s work to describe it as Graffiti or Street Art or Fine Art?
AVOID: Often times the artist’s intentions are misunderstood. I personally enjoy the ability to make a painting either in the street or in a gallery and not have to explain the meaning, to have it remain an enigma. A word or phrase can be interpreted a million different ways by a million different viewers. Am I a Graffiti Writer, a Street Artist, a Fine Artist, a Musician, a Writer, a Filmmaker, or am I just an artist? This is decided by the context the work is seen and the viewer’s interpretation. 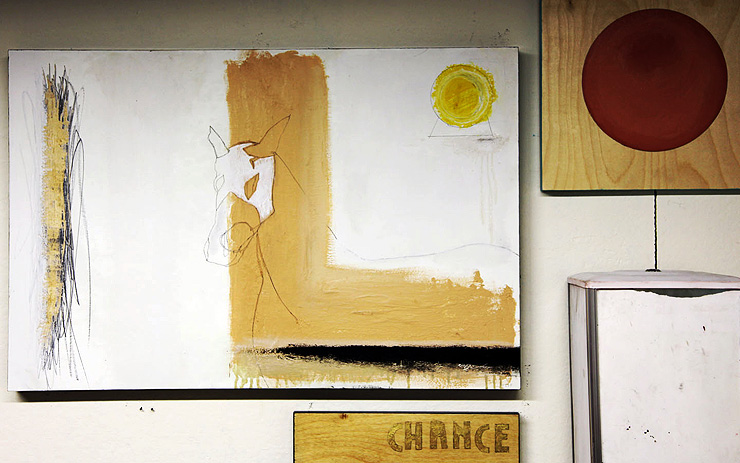 Brooklyn Street Art:What role does Street Art play in New York today?
AVOID: Well, if anything, Street Art has allowed for the illumination of the giants of my personal history. Through shows like PANTHEON as well as 112 Greene St. and many others, the once unsung heroes of graffiti’s past are coming to light, thankfully while many of the writers are still alive to see it happen. 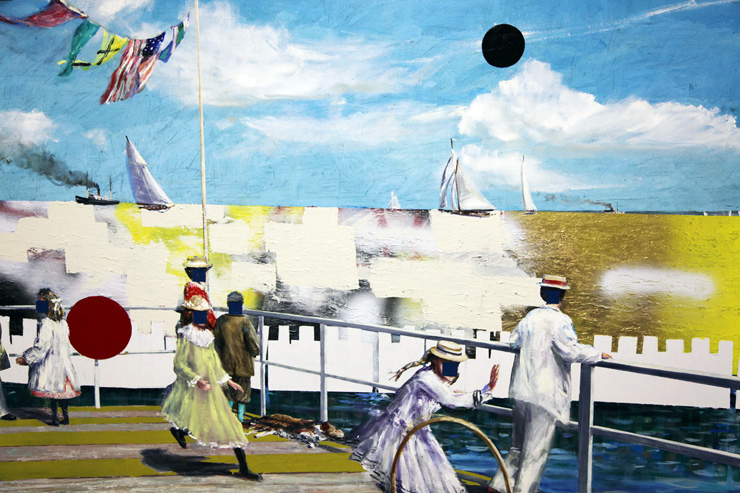 Brooklyn Street Art: How has your artwork changed in the last year?
AVOID: The literal “street” art of Brooklyn and NYC has been replaced by spotwork on Baltimore’s abandoned spaces, freight trains and track sides. I get more time to experiment as well as a chance to hang out and soak up some mental space. I am continuing to not categorize my work. I’m just making what I want, when I want, where I want.

3 days left to Support Pantheon – if they don’t hit 5K, they lose it all.

Please help Daniel and Joyce, the curators of “Pantheon” by donating to the Kickstarter Campaign. They are very close to reach their goal and you can make this happen. With only less than three days left on the Kickstarter timer your involvement is crucial. Click on the link below and please give: