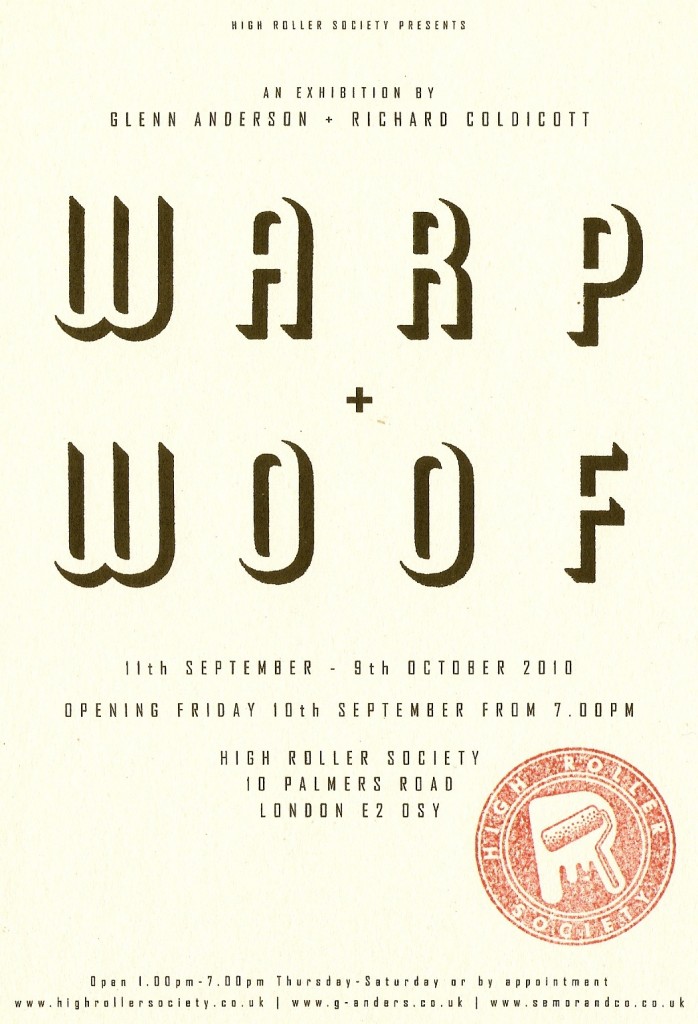 1. The threads that run lengthwise (warp) and crosswise (woof) in a woven fabric
2. A distinctive, complex underlying pattern or structure on which something is built; a base or foundation

The first London exhibition by Glenn Anderson & Richard Coldicott sees a continuation of their ongoing project “Warp & Woof”, a phrase used by the artists to describe the fabric of their everyday surroundings and existence which continues to shape and inspire them. Gravitating toward the disregarded spaces and detritus common to the post industrial ‘playground’ of their hometown Birmingham, here the artists present an installation of work incorporating drawing, painting, sculpture, moving image and found objects, all of which resonates their shared celebration of discovering beauty and treasure amongst the overlooked and discarded. WARP + WOOF reveals a fascinating montage of the otherwise mundane, and is on view at High Roller Society from 11 September to 9 October.

Glenn Anderson and Richard Coldicott are expert scavengers of detritus and skilled voyeurs of imagery. Making something out of nothing is like an animalistic instinct to these artists, but that isn’t to mean they make just anything. Indeed, abandoned places, everyday faces, and all things forgotten have given way to a score of previous exhibitions across the UK and US, including Beat 13 at Lab 101 Gallery in Los Angeles, Keep A Breast at Stay Gold Gallery in New York, Mutate Britain in London, the Birmingham OPEN at the Gas Hall/Birmingham Museum & Art Gallery, and film screenings on BBC2 and video & film festivals worldwide.

Yet, despite the 15+ minutes of fame they’ve each received thus far, both artists remain as grounded and as close to their roots than ever. As the title WARP + WOOF suggests, Anderson and Coldicott have been busy laying down a solid foundation of discarded particles upon which their inspiration and integrity have been built. Whether in their native Birmingham or elsewhere in the world, they weave themselves within their surroundings in order to understand its existence and give its faded past a new life. Now, their own trail of existence marks the paths they’ve trespassed on, often in the form of giant matchsticks, masks made from rubbish, sketches, films, and inspired energy… all very much alive, all incorporated in life’s woven fabric, and all from nothing.