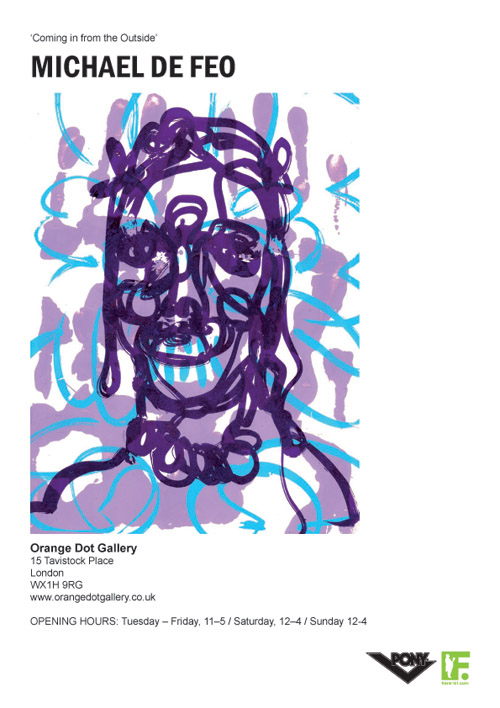 The Orange Dot Gallery is pleased to announce; Coming In From The Outside, an exhibition of ten new silk screened prints by acclaimed New York street artist, Michael De Feo.

Widely exhibited around the world, this is Michael’s first solo exhibition in London and will feature for the first time, re-interpretations of his iconic flower image along with other new prints based on his drawings. All ten prints have been produced in small, signed and numbered editions on a variety of materials including maps and blueprint paper.

One special eleventh edition (signed and numbered) will be given away to visitors of the gallery on Saturday, March 12.

Michael’s new prints are collaborations with master printmaker, Gary Lichtenstein. The pair first worked together in 2008 when the Aldrich Contemporary Art Museum invited Michael to produce an Aldrich Edition to benefit the museum. Gary is widely known in the field and is presently working together with Robert Indiana on his HOPE series of prints and canvases.

Best known in the street art movement for his ubiquitous flower image, De Feo has been creating illegal works on the streets of international cities for over eighteen years. Not limited to the streets as his canvas, his work has also appeared in galleries and museums around the world including the Aldrich Contemporary Art Museum, Ridgefield, CT; MASS MoCA; Museo de Arte, Puerto Rico; The New Museum of Contemporary Art, NY; the A3 Art Fair, Paris; Colette, Paris; Manifesta 7, Trento/Trentino, Italy; and The National Gallery, Bangladesh, amongst others.