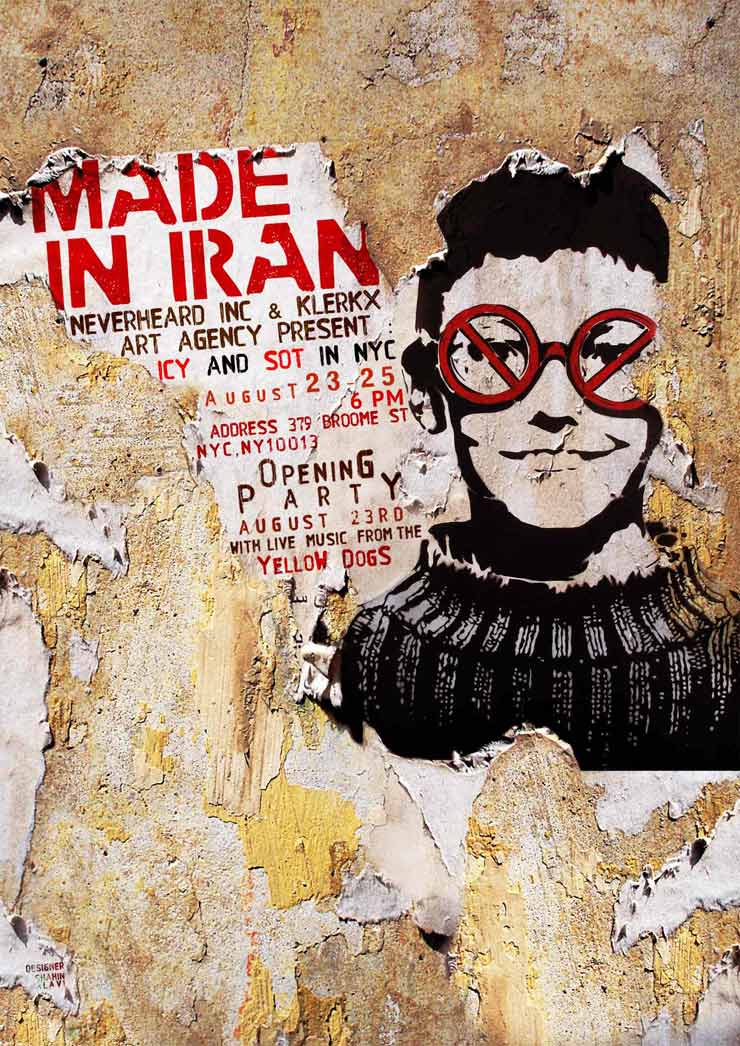 ICY AND SOT: MADE IN IRAN
Klerkx Art Agency (Amsterdam, Holland) and Neverheard Inc. (Brooklyn, NY) are proud to announce: MADE IN IRAN, the highly anticipated New York debut of the young Iranian street artists (and brothers): ICY AND SOT.
MADE IN IRAN is a groundbreaking display of the internationally acclaimed street art duo, featuring new stencil works and site-specific installations. The exhibition will be open to the public from the 23rd to 25th of August at Openhouse, 379 Broome Street. An opening reception will be held on Thursday the 23rd of August from 6 to 9 PM with a live musical performance by the Iranian punk rock band Yellow Dogs  (facebook.com/theyellowdogs).
Hailing from the city of Tabriz in North West Iran, brothers ICY AND SOT continue on their creative crusade to traverse pre-conceived perceptions of traditional Iranian art’s brevity through their highly intricate yet striking stencil artworks. Despite Iran’s cultural flourishing since the 2009 uprisings in Tehran, creative visual expression is still a constant struggle for its’ artists and society today. It is an oppressive force that provokes the Iranian art scene to fluctuate between an inhibited elegance and raw underground energy. This ambiguity is reflected in the vulnerable yet hopeful deep-set imagery of ICY AND SOT’s street art.
Using western street art approaches, the artists’ polarized themes of love and hate, war and peace, and hope and despair are manifested into the spectral faces of the innocent.
ABOUT ICY AND SOT:
ICY (born 1985) and SOT (born 1991) are stencil artists, skaters, best friends and brothers from Tabriz, Iran. ICY AND SOT started their professional career in 2008. They have made paramount accomplishments in Iranian urban art culture, creating an international buzz by playing it anyway but safe. Their prolific stencil work can be seen on the streets of Paris, Turin, Sao Paolo, New York and many other international cities. The brothers have been featured in numerous exhibitions and publications throughout Iran, Europe, South America and the US. Following New York, MADE IN IRAN will be making its way over to Amsterdam, Berlin and Milan.
In conjunction with the exhibition, American Iranian musician Ali Eskandarian will be performing an acoustic set in the gallery’s garden on Saturday, August 24th at 5 PM.
Openhouse Gallery
379 Broome St.
NYC
Read more