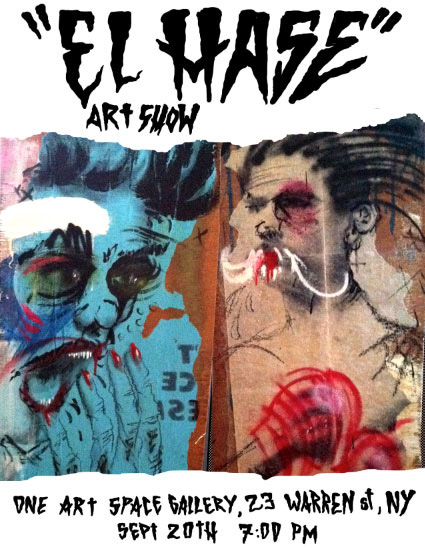 The Struggle” explores popular aesthetics featuring emblematic figures of boxing icons
and characters from classic horror movies.  Incorporating a diverse collection of found
objects and various mixed media, El Hase, a pioneer of Venezuelan graffiti and urban art,
presents a series of pieces and installations in which he displays his figures with distressing
expressions and threatening postures, relating them to images from B-movies and horror films
and referencing the constant struggle of graffiti artists and skateboarders to legitimize their art.
“In this series of work I want to express what’s going through my head when I walk
at night on the dark streets of Caracas, my hometown, and to portray that
feeling I rescue street objects at night  from the dark streets of Brooklyn”.
Venezuelan aesthetics abound in his work – handmade signs, street color palettes, posters,
local transportation and street graffiti, all are combined with local and international icons, horror
and B movies, Venezuelan and international Pop figures, and the skateboard art which El Hase
assembles into the personal style that he call B-Art.
With this exhibition, One Art Space continues the work started by other private galleries in New York City
during the 70’s and 80’s, promoting and legitimizing emblematic pieces of street art and graffiti.
“Luchadores” By Sergio Barrios (El Hase) will be on view from Thursday,
September 20 through Saturday, September 29 Viewing hours are from 7 – 9 PM.
One Art Space 23 Warren Street   – TriBeCa – New York City 646.559.0535
Read more