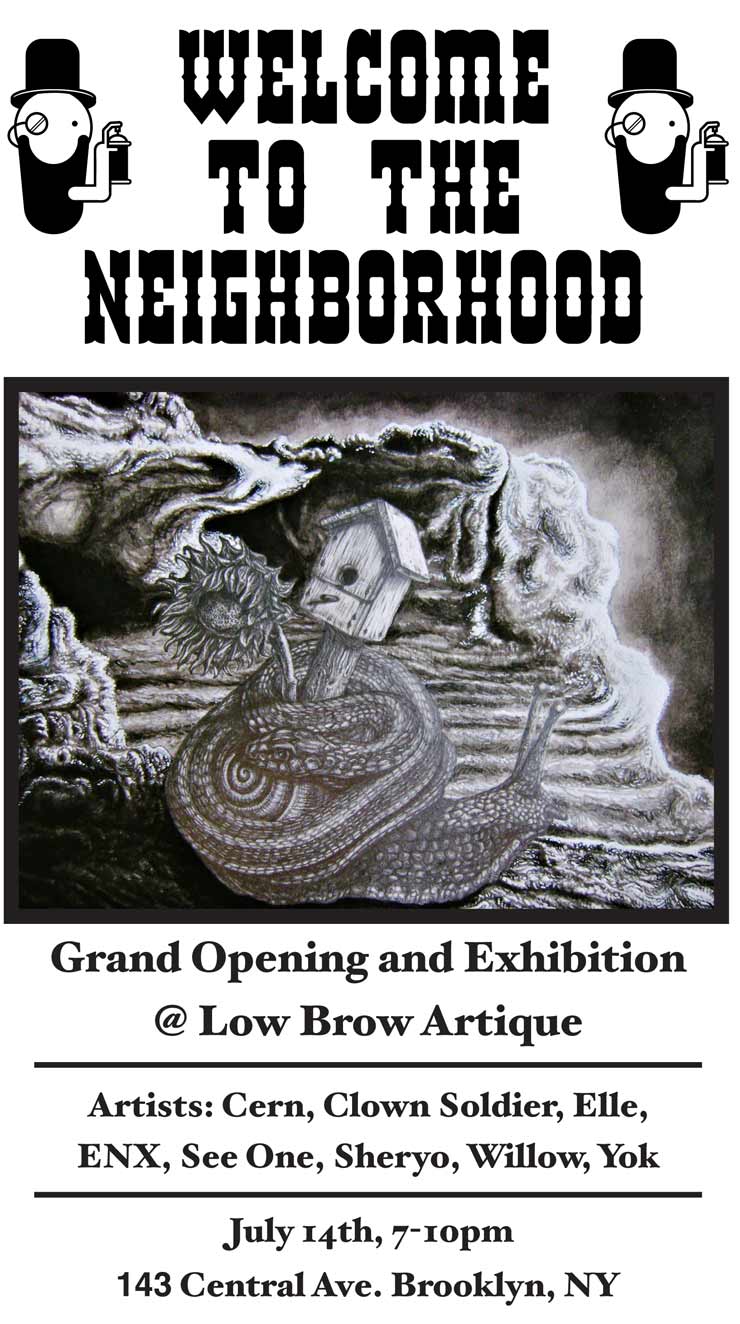 For the inaugural exhibition, Low Brow Artique presents Welcome to the Neighborhood, which emphasizes the diversity in Brooklyn-based artists. The exhibition will be open to the public July 14th to August 5, with an opening reception on July 14 to 7 to 10pm. Featuring a wide range of thematic elements, the gallery presents the work of Cern, Clown Soldier, Elle, ENX, See One, Sheryo, Willow and Yok. While some of these artists have overlapping thematic elements, each representation distinguishes the artwork produced in this borough.

The work of artists Willow and Cern can be seen as an eloquent contrast in the representation of natural imagery in this urban environment. Both artists use striking color palettes in their depictions of different species; the end result of this work, however, is strikingly different. Mixing Latin American surrealism with characters based in his graffiti background, Cern brings creatures to flight that exist outside of a specific time and space and, instead, in a reality of your dreams. In contrast, Willow painstakingly builds up an array of colors in his brushstrokes to recreate a Genus of his choosing. Whether or not these species were present in his rural upbringing does not matter; he still paints each one with the care as if he has known them forever.

In contrast to the emerging themes in the area, such as wildlife, artists such as See One are working in a style independent of any other. In a recent break with his character- based graffiti background, the artist has started creating abstract pieces, which he calls “shards.” These jagged shapes, which are often accompanied by equally-as-pointed titles, encompass a style that is unique to the artist.

By bringing together this array of public artists, Welcome to the Neighborhood represents the visual diversity currently alive within Brooklyn. Ranging from collage to illustration, from the abstract to the tangible, those who find themselves currently creating work in Brooklyn form a contrast in artistic expressions. It is, however, this diversity that makes so many of us, including Low Brow Artique, proud to call the area “home.”