The turning point may have occurred Friday when Trump capitulated to the two other branches of government, released his hostages (federal workers), and allowed the US government to fully open – and planes to land at airports. This continuous attack on institutions is wearing down the wall between the wolves and the chickens. Guess which one we are? 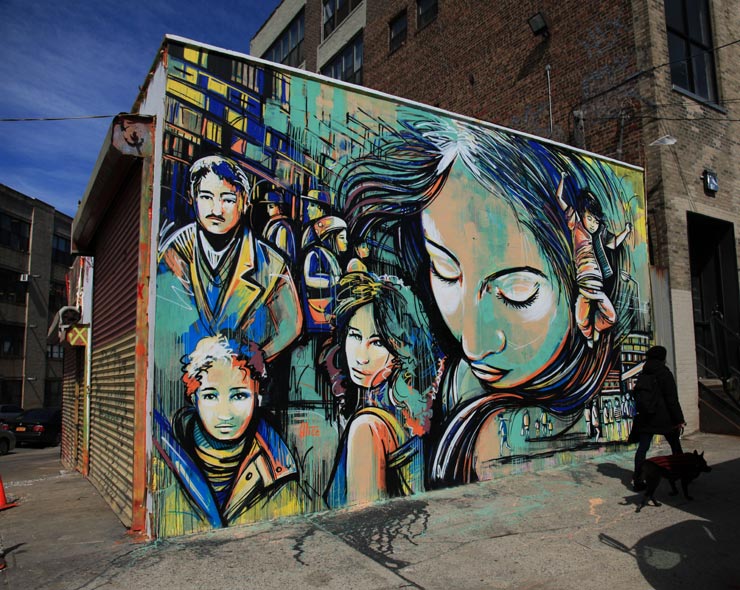 We just took a tray of green jello shots out of the freezer and you can kiss anybody you want because today we’re all Irish, even Shakisha. Happy St. Patrick’s Day to you, unless you are one of the thousands of gay or lesbians dis-invited as usual from marching down 5th Avenue yesterday in the parade. 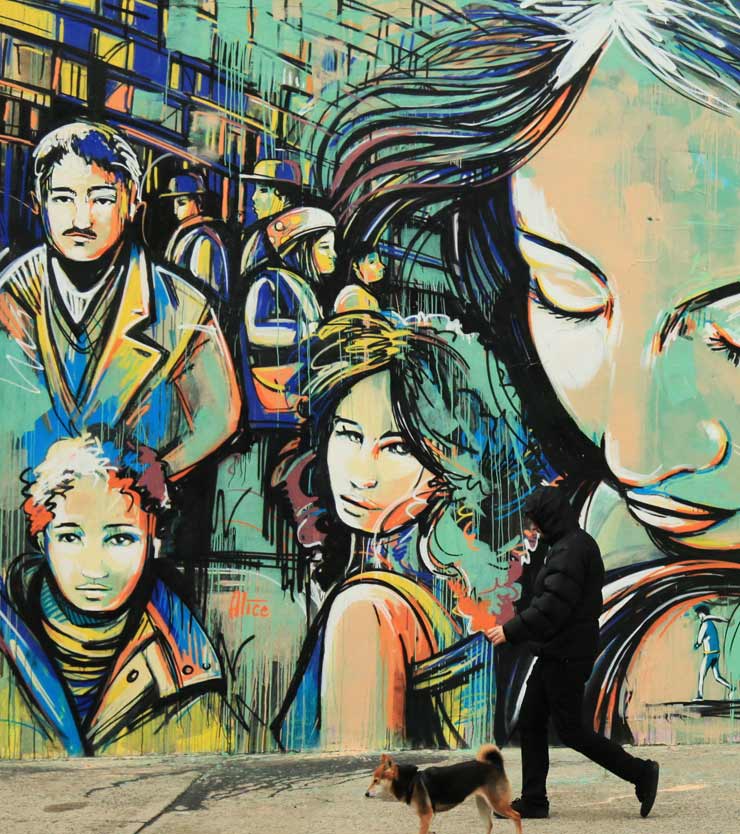 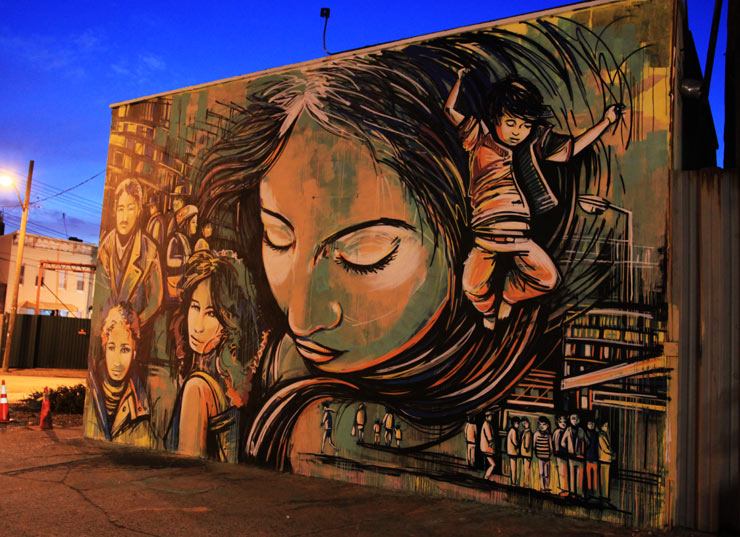 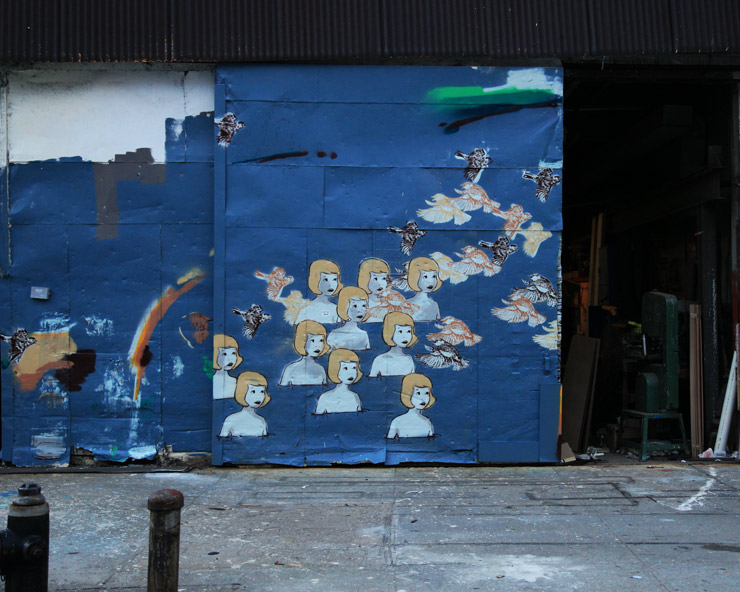 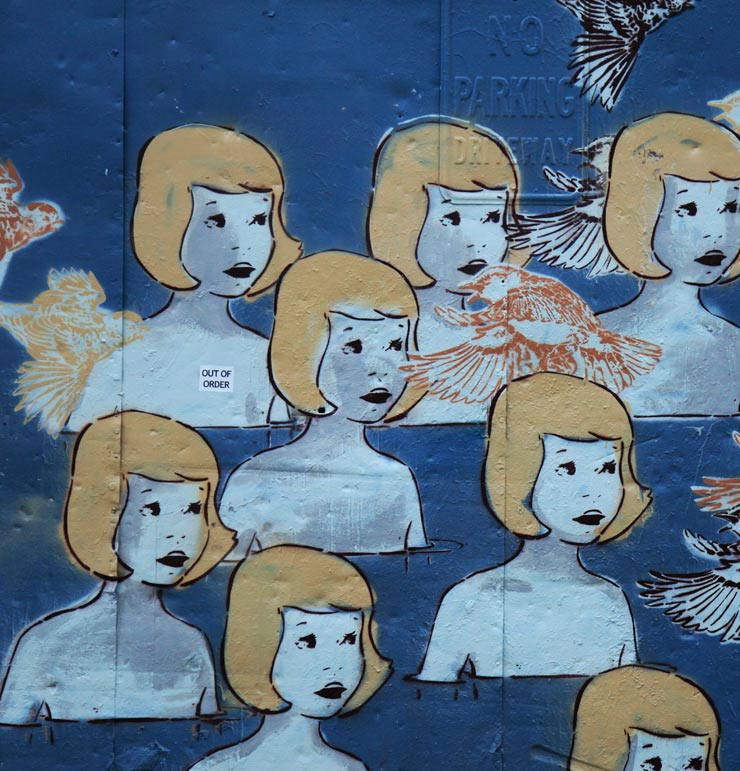 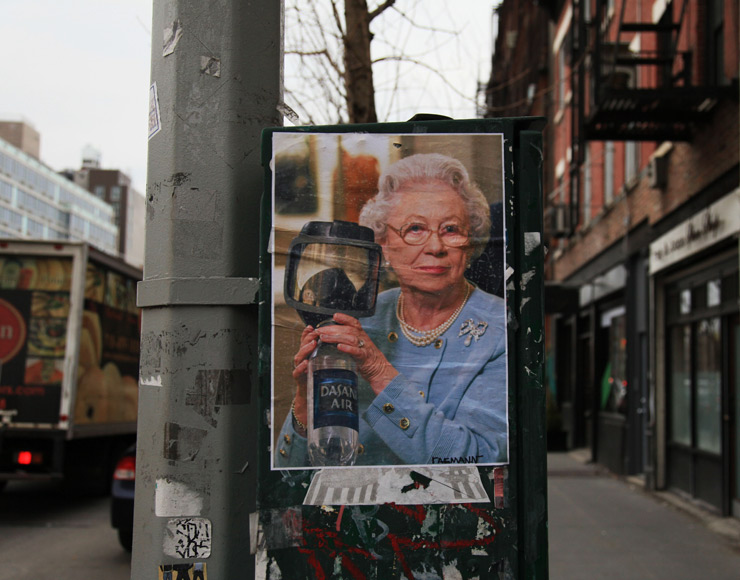 Her Royal Highness is hawking this royal brand of air, harvested from the finest sources near Sandringham House and the wooded areas around York Cottage, no doubt. Raemann (photo © Jaime Rojo) 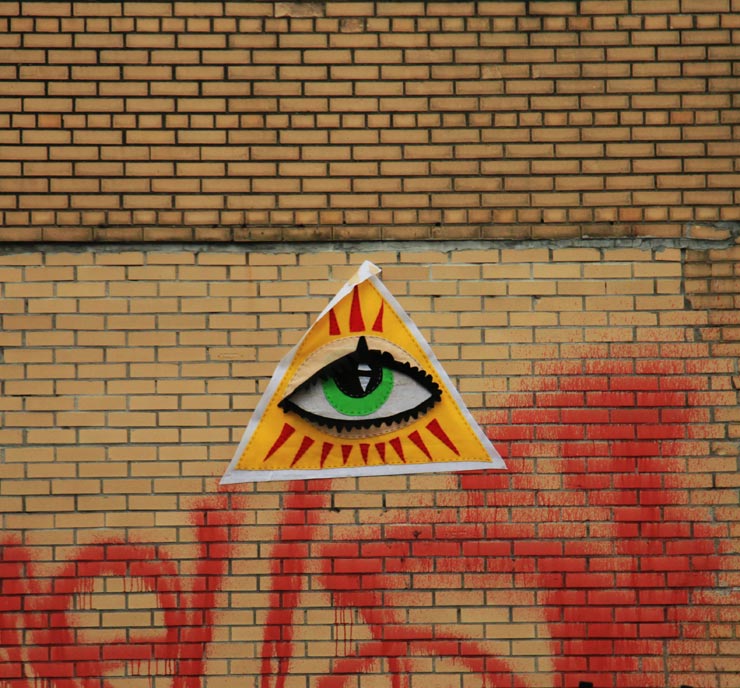 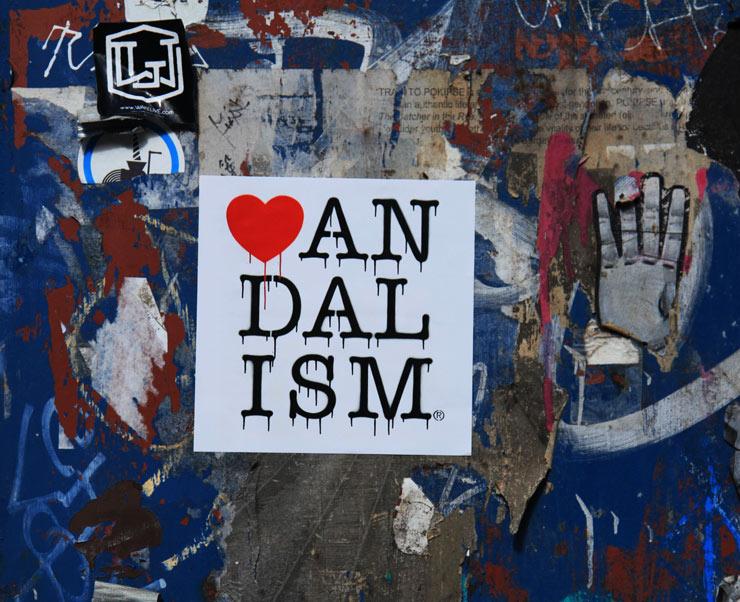 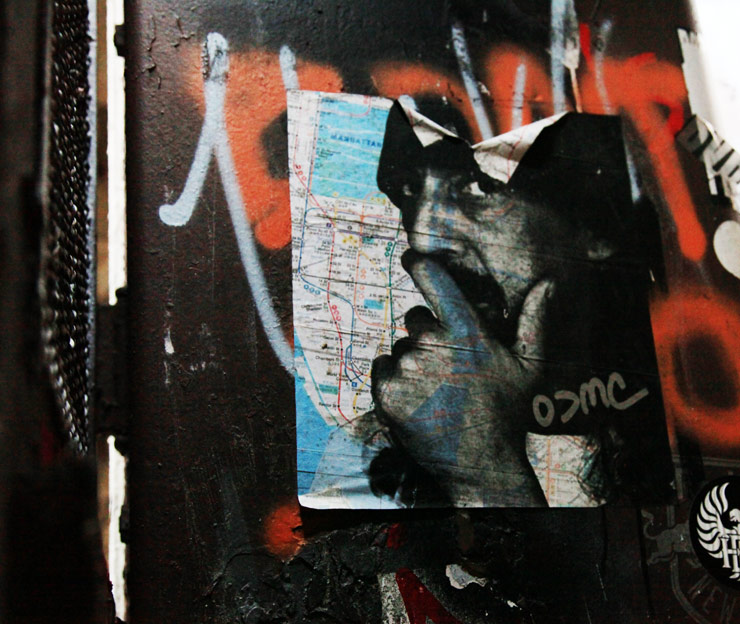 Graff master Furtura is getting up in a new Street Art way with Oh Captain My Captain AKA OCMC. (photo © Jaime Rojo) 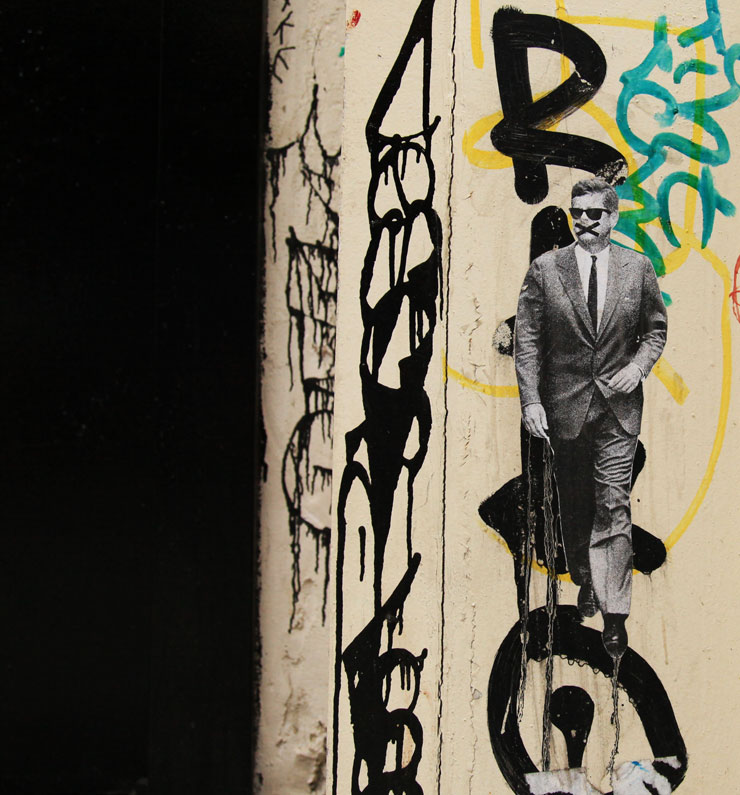 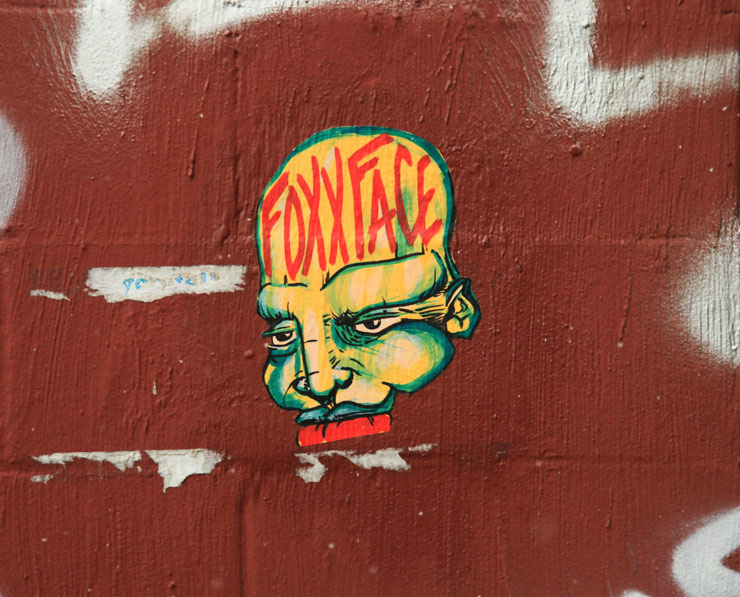 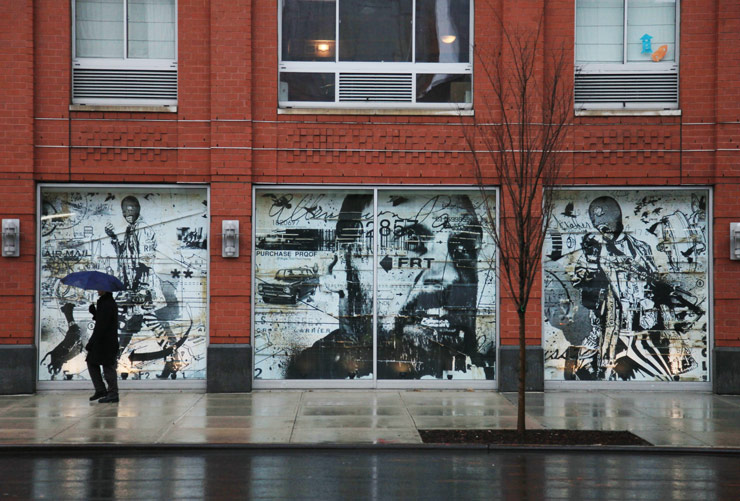 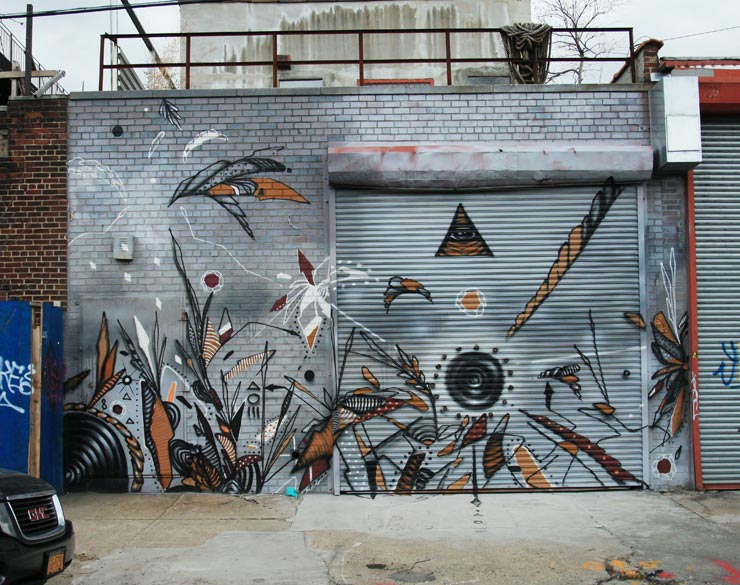 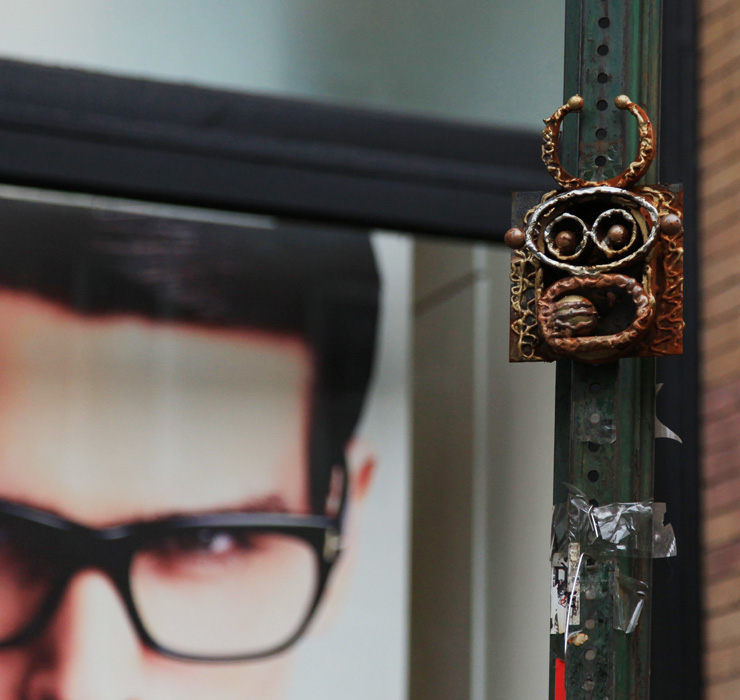 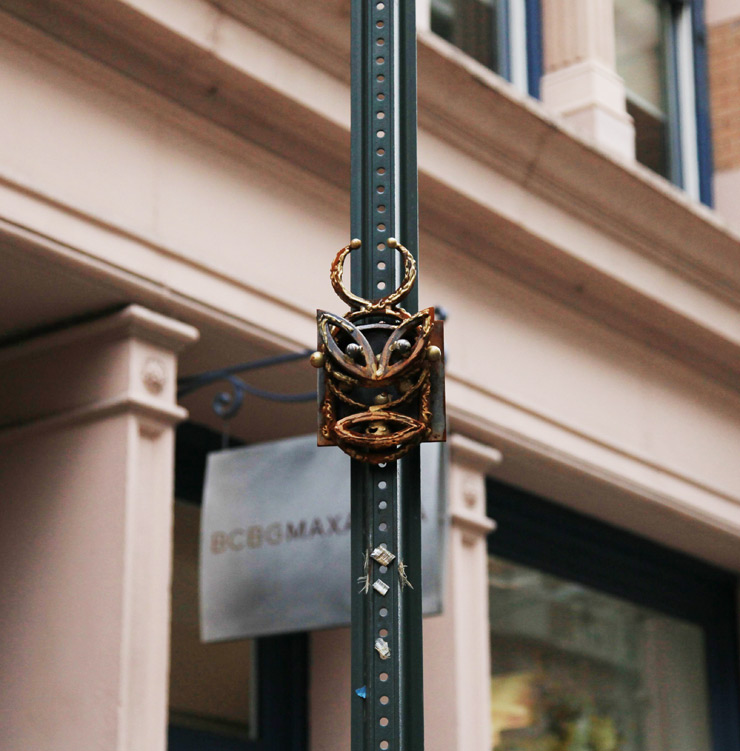 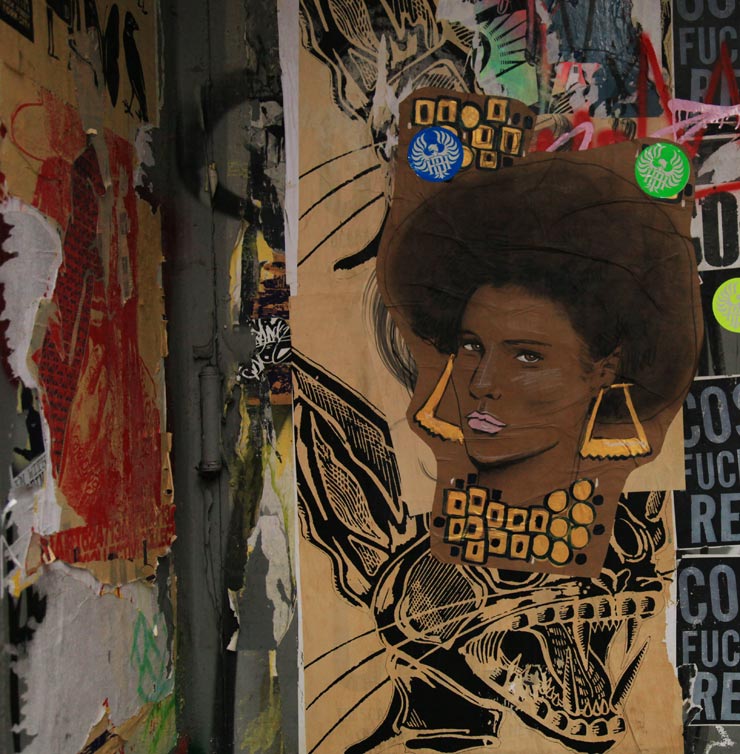 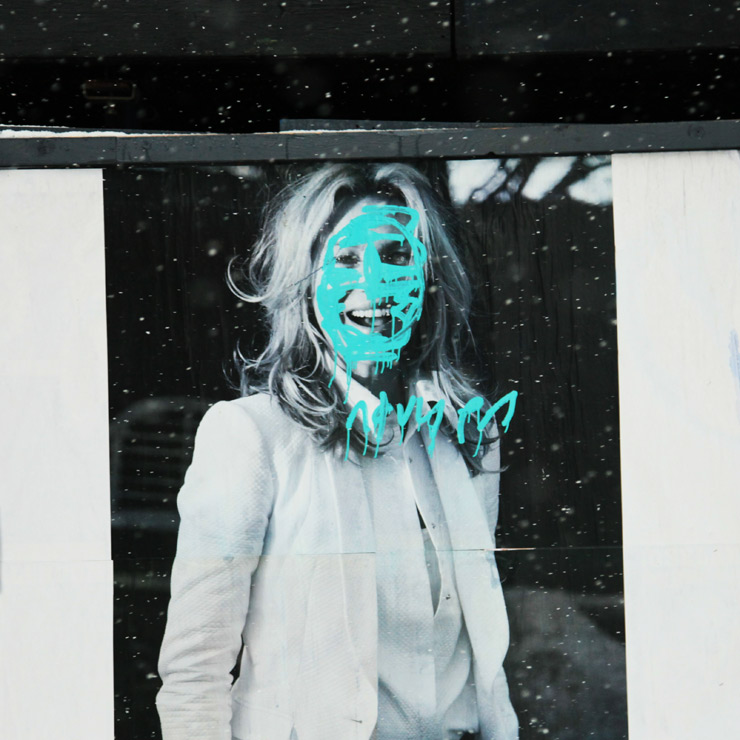 Artist Unknown. This updated poster featuring the ubiquitous Kate Moss reminds us of some of the work of the great Conceptual American artist the late David Wojnarowicz. 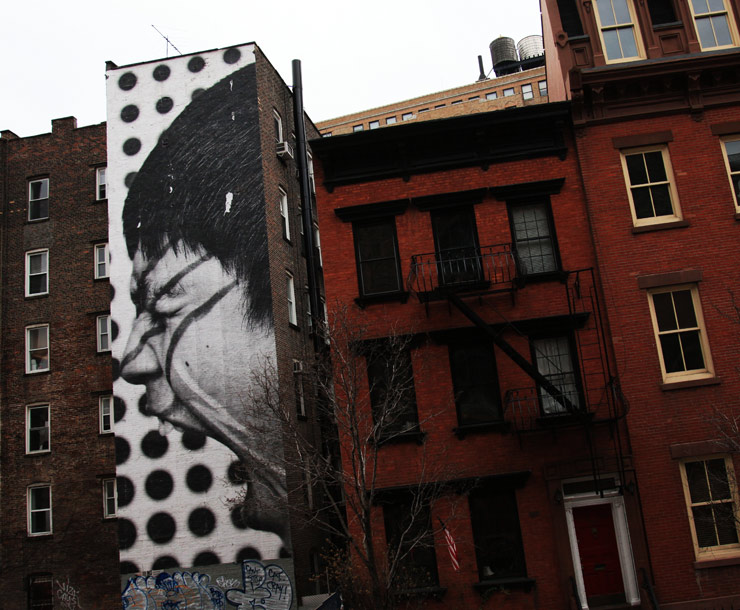 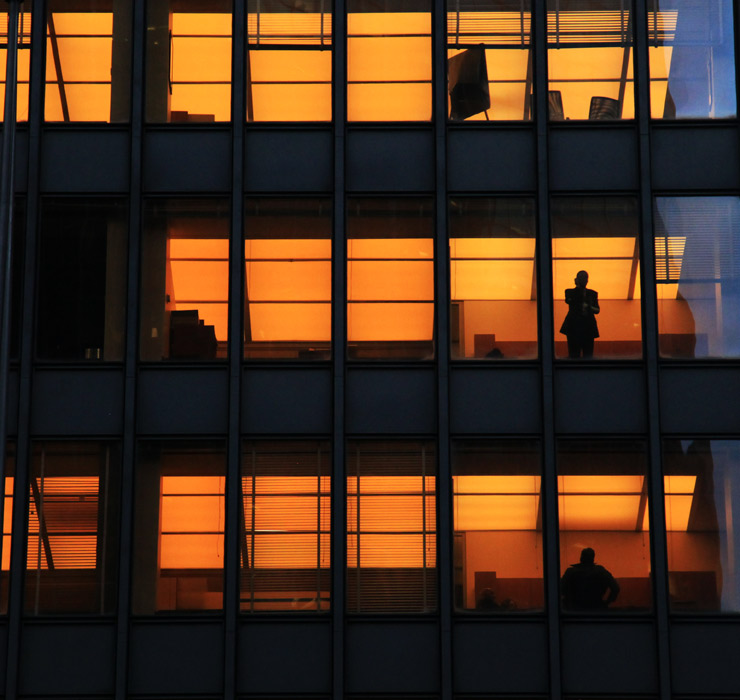 Nothing will stir up the ire of artists and their fans than another artist’s appropriation of style or technique. It’s considered “lame”.

And nothing will produce audible cries from artists, art historians, collectors, publishers, fans, and armchair lawyers about copyright infringement and utter lack of creativity than when wholesale appropriation is at hand.  Of course sometimes it doesn’t hurt your market value to roil them all at once. Miss Bugs has “the touch” right now.

You’ll remember the Joe Black and Miss Bugs show at Brooklynite this spring, where Ms. Bugs opened the eyes of many with wide swipes of fairly newly minted pop imagery into the poppy pieces.

In promoting the show the term “2 Many Artists” was bandied about as a reference to the snip and clip musical mashup/bootleg pioneers of 2 Many DJ’s, who would be analogous to another hairy white guy named GirlTalk today.

This month a very large street art piece in Brighton, England by Miss Bugs has enlivened the debate about any number of things, including copyright issues, right down to the amount of imagination of the artist may possess.

What seems to have gotten street art fans in a froth is that Miss Bugs is not using old campy print advertisements or bits of classic paintings as reference; rather, it is that the work is using very recent and pretty well-known pieces of STREET ART in the STREET ART.

In fact, barring Mr. Brainwash (MBW), Miss Bugs may be the first to appropriate images so historically quickly, so frequently, and so enormously.

Miss Bugs in a big way.

But then, that’s exactly what entertains others, “to me Miss Bugs is not so much appropriating, but b**ching up modern art, Hirst, Daffy Duck, Fairey, King Kong, Munch, Koons, DFace, Banksy whatever – it’s graffitin’ graffiti, vandalising vandalism…,” says a poster on a well regarded online forum.

Brooklyn hometown heroes Faile may have lifted their images from lesser-known sources, and thus the images quickly became associated with them and “owned” by Faile in the minds of fans (photo Jaime Rojo)

Miss Bugs doesn’t so much adapt the original Faile image as adopt it wholesale.

This calls into question the creativity of the artist in the minds of some. In fact, you may hear cries of “Emperor’s New Clothes” more often than during an Orange Alert in the “War-On-Terror” Bush years.

And then there’s the Holy Grail of Modern Street Art Imagery.  Shep Fairey takes his hits, most of them because of his public stature, but chopping up an Obama “Hope” image and splaying it across the wall as a collaging effect makes the Fairey Faithful pale and weak from disbelief.

On this side of the pond we have some troubles this summer with what street parlance calls “Haterz” – those folks who are looking to shred the first year president at every turn, most likely because of our sad history of racism.  To the supporters of Obama, seeing this iconic street art image so quickly mutilated only adds to the sting of the horrible epithets that are hurled from the neanderthals.

Oh, let’s see. There’s Picasso, Warhol, and Haring and I haven’t left her chest.  What about the Munchy Mickey Mouse ears? Now those could get you in trouble. And the Rakkoon eyes? (Miss Bugs) (photo Jaime Rojo)

But let’s not all get our wheat-pastes in a wad.

Either you support free expression or you don’t, and frankly, this mixing of High with Low, Touchstones with The Banal, has been a fabulous feature of “the modern” now since Pop became Popular. Perhaps this willful free-association appropriation is simply a harbinger of what’s to come – or what is already happening elsewhere. Every piece of recorded history is now reduced to 1’s and 0’s and used as easily as paint from the tube.

Rae McGrath, owner of Brooklynite, speaking in reference to Miss Bug’s techniques, says, “I think they are remixing things to make them their own, but because the images they are using are current they get more scrutiny. (It’s an) Interesting debate that you can obvious take the side you feel strongly about.”

Or maybe it’s not about the art at all.  As one collector remarked to another on a forum online recently, “People do get testy once the (Miss Bugs) prints are market price, don’t they, Bob?”

Take a look at the GirlTalk video below and tell us about all the cultural “Sacred Cows” you’re going to defend and preserve.