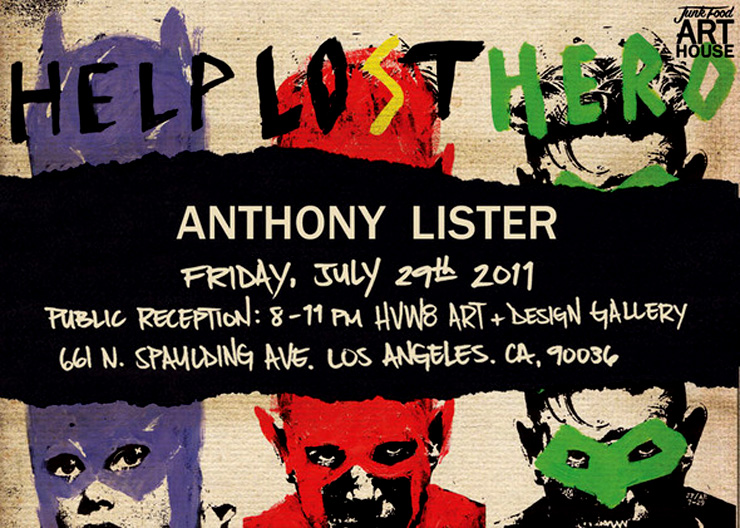 For the project, Junk Food Art House has teamed up with internationally-acclaimed Australian street artist Anthony Lister. Known for his iconic imagery of Super Heroes, Lister customized the artwork of Warner Bros.’ legendary DC Comics Super Hero characters, including Green Lantern, Wonder Woman, Batgirl, Aquaman and The Flash in his signature style. Lister comments, “Decidedly, I have chosen to use comic book characters as a metaphor to reference ancient mythological battles between heroes and villains, authority figures and survivalists, pseudo-equality and the general human condition today.”

Throughout the month of July, a series of mysterious and much talked-about street posters featuring Lister’s DC Comics Super Hero artwork, created exclusively for Junk Food Art House, were spotted throughout Los Angeles. The poster campaign will culminate in a launch event at HVW8 Art + Design Gallery on July 29. Transforming the space with custom murals throughout the gallery’s exterior and interior, Lister will unveil a large-scale site-specific painting for the show. The centerpiece will be an old-fashioned ice cream truck covered in vibrant graphics painted by Lister and will serve as a mobile pop-up shop, officially launching Junk Food’s entrée into mobile retail. The evening will also feature an assortment of not-to-be missed highlights, including a video installation displaying exclusive footage of Lister customizing the truck and the premiere of Junk Food’s t-shirt collaboration with Lister. A limited-edition collection of poster art will debut the night of the opening and be available the entire month of August in addition to Lister’s exhibition at HVW8 Gallery.

Following recent product installations in Colette, Selfridges, and Beams, this collaboration marks the premiere project for Junk Food Art House, a project highlighting unique artists followed by limited edition product capsules sold at leading retailers throughout the world. Andrei Najjar, Vice President at Junk Food, notes, “We are incredibly excited to launch our newest brand platform with Anthony Lister. Our DNA is built from art and creativity and Lister’s signature non-traditional approaches to his craft are similar to the values that formed our company over 12 years ago.”

Open to the public, the launch event for Junk Food Art House Presents Anthony Lister takes place on Friday, July 29, from 8 to 11 p.m. at HVW8 Art + Design Gallery, and the exhibition will be on view until August 29, 2011.