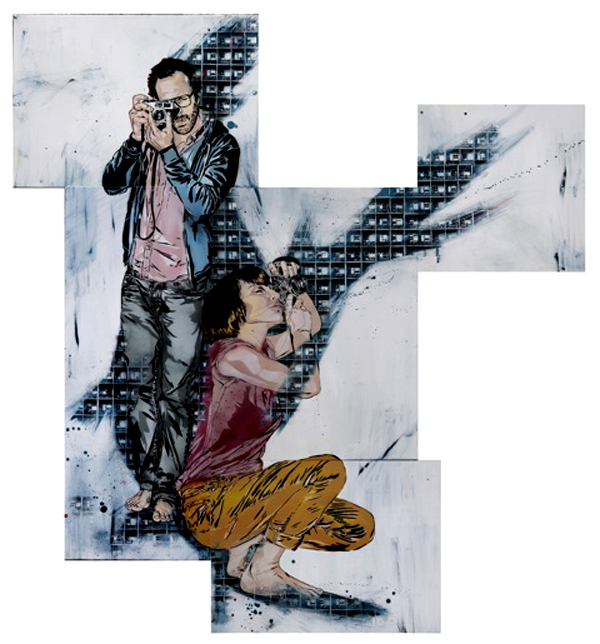 Jana & Js
Solo show “Jeux de constructions”
February, 25 – March, 26
Opening on Friday, February, 25 from 6 pm
Deserted factories, parking lots being demolished, low rise apartment blocks : these elements – among many others – surround and inspire Jana & Js. Their work is nourished by the city they live in, together with its inhabitants and its ever changing architectural landscape. The paintings created by this couple of artists make use of extremely detailed and scrupulously prepared stencils..
Jana & Js raise the question of the individual in large groups of buildings and more widely in the cities, combining portraits and architectural views.
Their street paintings (in France, Austria, Russia, Slovakia, Romania and Spain) also led them to develop an interaction with the environment in which they operate and the public – passerby or spectator – using sets of mirrors as a game in order to create infinities of ways of seeing the city.
Jana & Js are young artists whose work began to take shape only in the mid-2000, and who are today among the most talented of their generation. After having lived and worked together in Paris, they are today between Austria and France.
Jeux de Constructions is the second exhibition in Itinerrance Gallery devoted to them. Combining their love for woodworking, rebuilding their own materials and images composition from their cuts, this exhibition will present for the first time a wide range of their work volume initiated a few months ago.
Galerie Itinerrance.