It would be fair to say that the first decade of the the 21st Century didn’t augur jolly good times ahead of us. The nascent century brought enormous challenges worldwide:  There were numerous terrorist attacks; 9/11 in the USA was a transformative event that affected the society at large in ways that have not been previously experienced before.  Other countries such as Spain, India and England suffered their own devastating terrorist attacks during the same decade. There was the big economic crisis in 2008 spurred by the banks and the mortgage collapse in the USA and the subsequent massive layoffs from all sorts of industries and gutting of social programs. Not to mention SARS, bird flu, swine flu, earthquakes, forest  fires, hurricanes, mudslides and tsunamis. 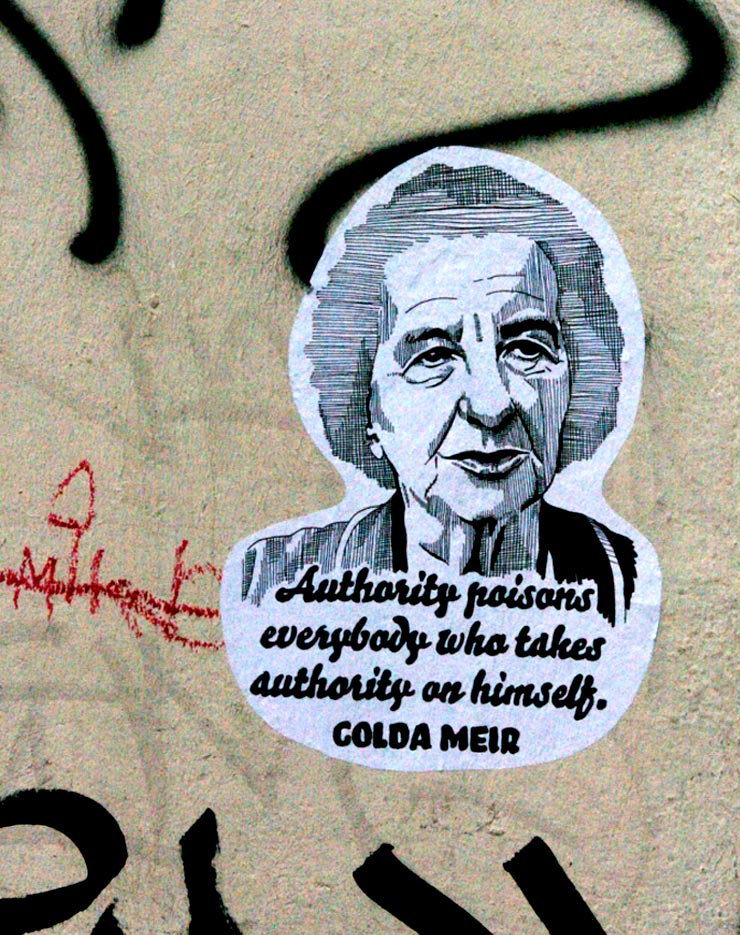 A wheat paste of Golda Meir in Berlin (photo © Er1cBI41r)

By the time December 2010 arrived we were feeling exhausted from the past ten years. Only two months into a new decade few people could have expected that we would be witnessing radical changes taking place in The Middle East. Who could have imagined that the ray of hope in humanity would come from Tunisia and Egypt.  As the people fill the streets to demonstrate publicly to renounce their leaders, citizens in neighboring countries likewise are openly questioning the power and authority of the leaders in their highest offices.  The urge to speak up and demand in the street – it is as if a giant is awakening. Cries for change are coming from the ordinary citizens fed up with authoritarian regimes and amazingly, we are seeing the last gasps for air from shaken dictators who refuse to give up their lucrative and powerful positions.

From Berlin we received this wheat-pasted Street Art with the hand rendered illustration of Golda Meir. Meir was one of the first female politicians to be the elected as the leader of a government in the modern age, as the fourth Prime Minister of Israel from 1969 to 1974. She understood the perils of power and authority during a tumultuous tenure that saw terrorist attacks and the assassination of 11 Israeli athletes during the 1972 Olympic Games in Munich. Interesting that various sources online have this quote attributed to both Meir and Vladimir Ilyich Lenin, two people well acquainted with the topic of authority.