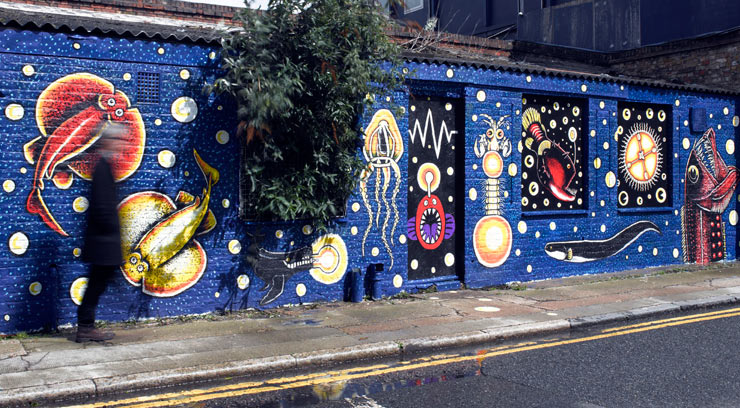 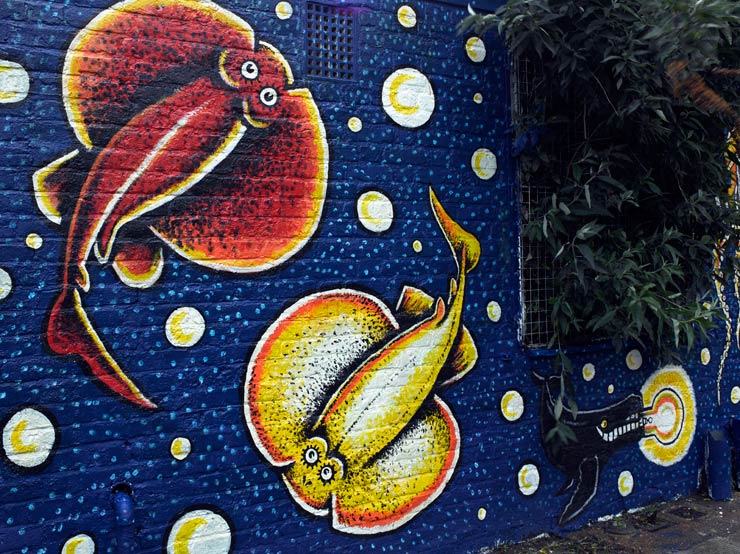 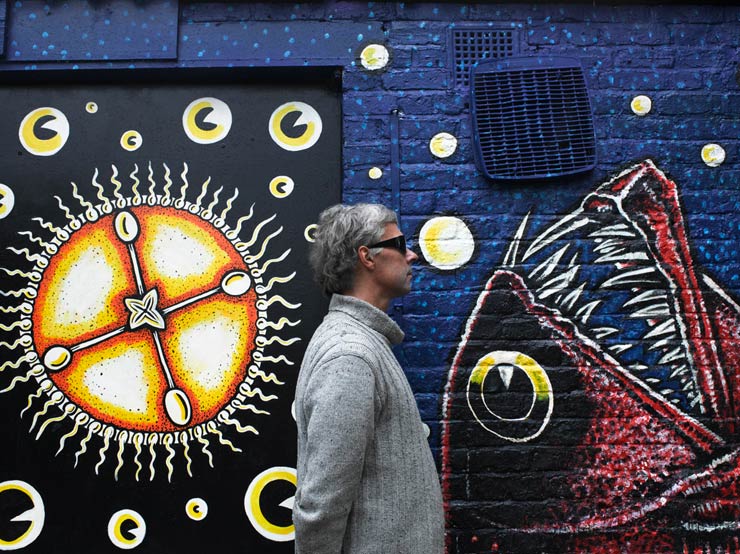 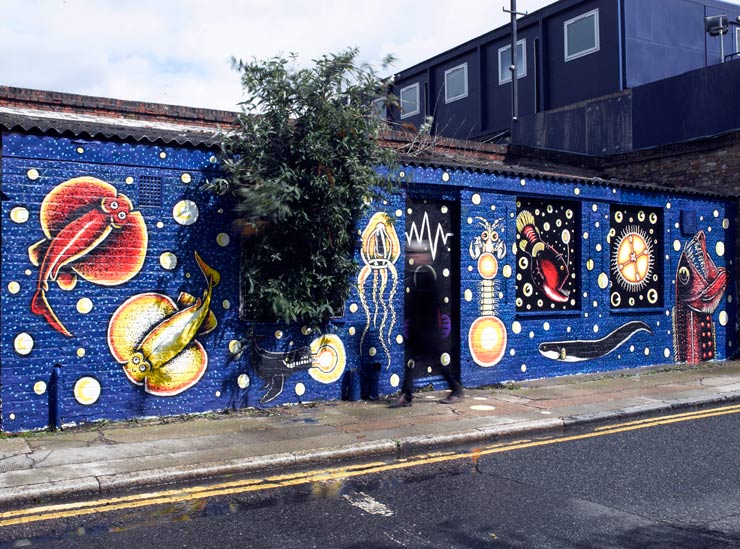 BSA contributor and urban explorer Garry Hunter just stumbled willingly into an alley in London where Street Artists ROA and Phlegm had transformed the walls and he shares his experience here with us, along with some images of the work.

By New York standards, London snowstorms are occasional and fleeting, with this winter’s first carpet of white disappearing within 48 hours. This window of opportunity on a rare warm day prompted a trip to South East London, ancient habitat of second hand car dealers and purveyors of stolen goods. Peckham is off the Tube line, but an over ground artery to Kent allows quick access from Central London. It is very close to this Rye station where there lies an unassuming dark alley that opens out into a plethora of monochrome masterworks.

Modern Flemish master ROA has decorated four walls of an industrial yard with Gothic bird skulls, while the remaining doorways, loading bays and other brick surfaces show an entangled narrative of dark materials by Sheffield-based Phlegm. These hidden gems were only made fully accessible by the serendipitous arrival of a resident in the adjoining apartment, who had keys to the barred gate of the yard.

As I leave back through the tunnel to the High Street, my head spinning with intense imagery, the waft of goat curry mingles with odors from an Arabic tea-stall, the hawker’s call and the loud strains of passing London buses. Back to reality, cheap shops selling tat and the predictable chain stores of an English high street; an identity being crushed by corporate greed. 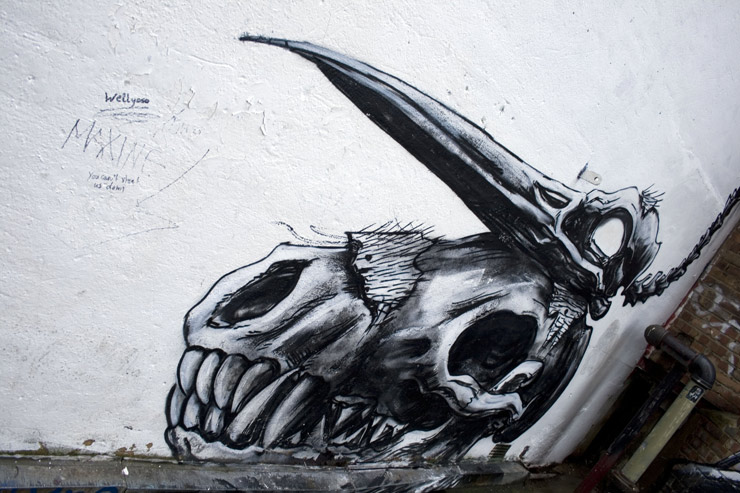 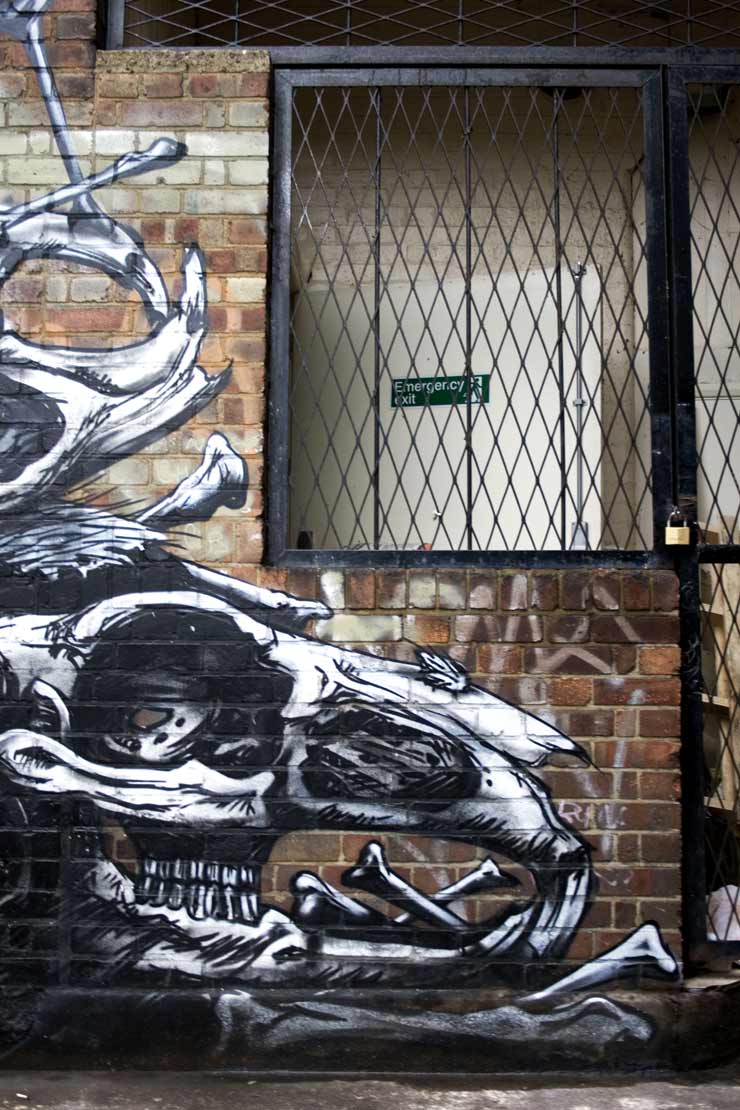 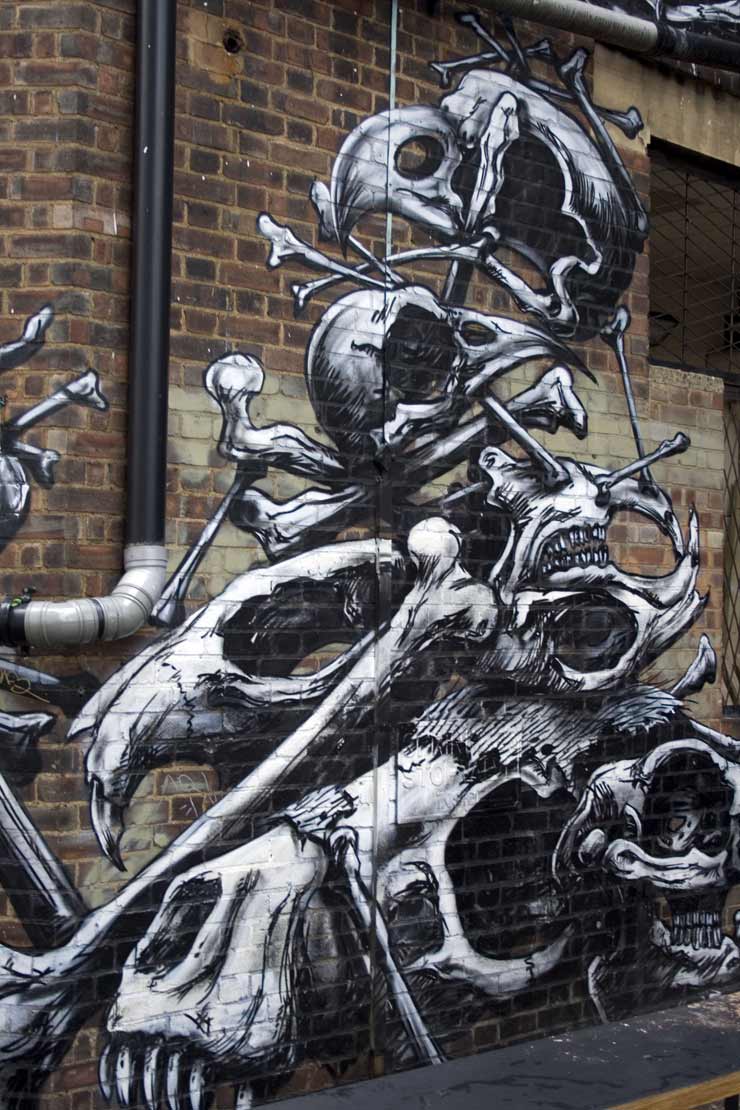 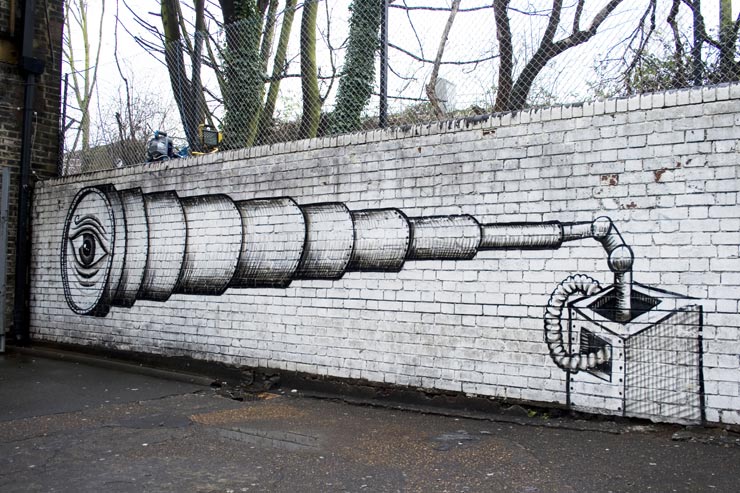 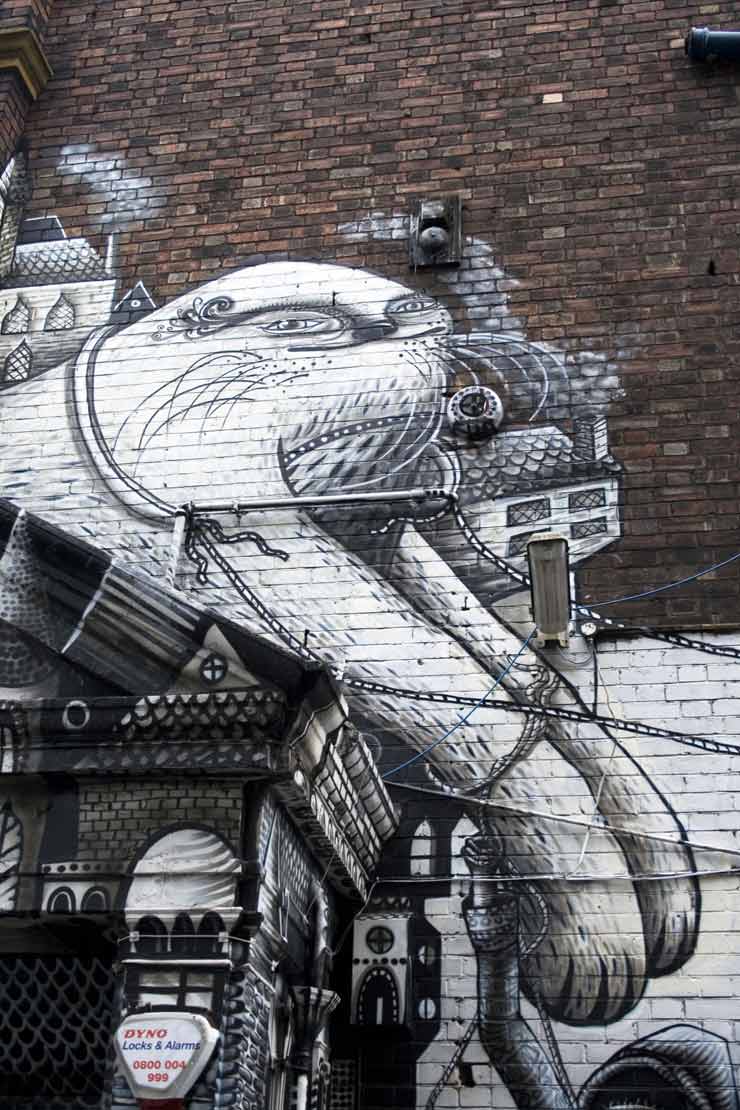 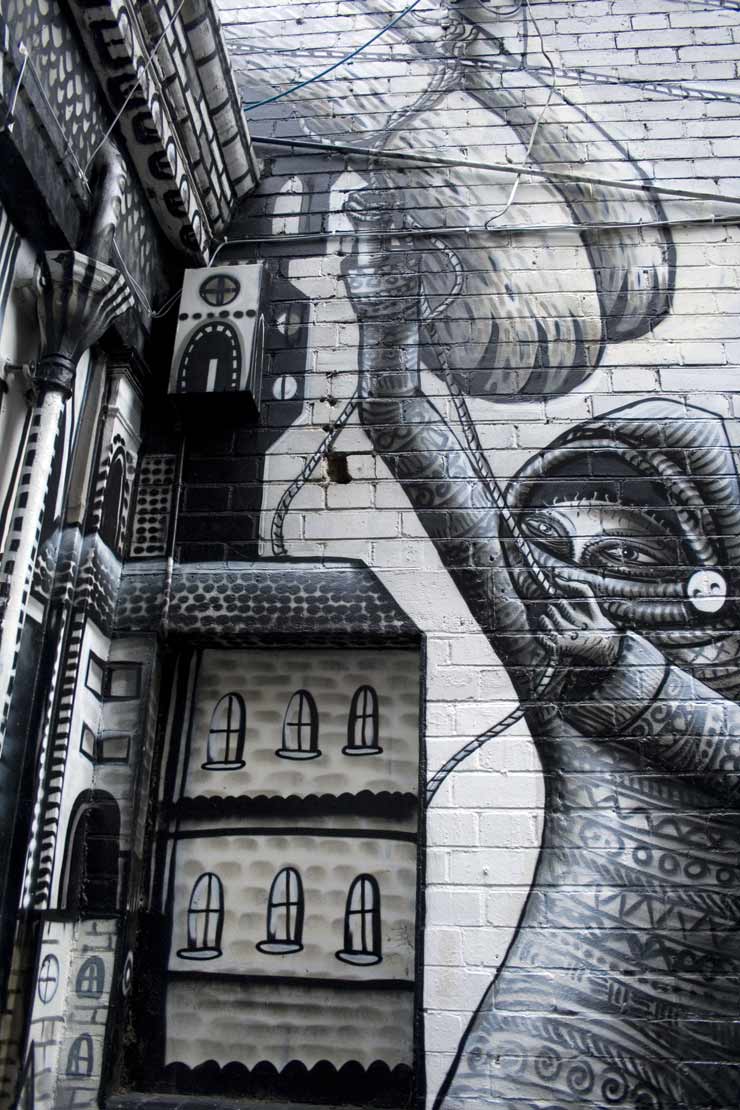 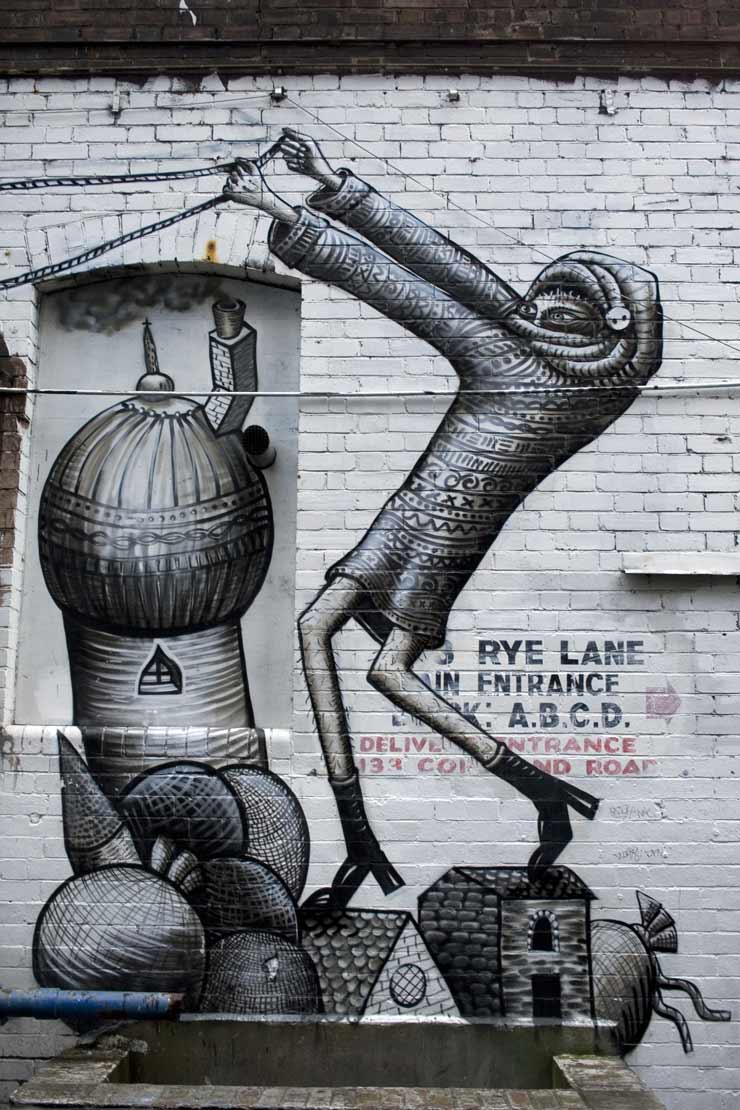 Team Robbo, the fun-loving anti-Banksy graffti Collective from South London who is not pleased with the appearance of work by the world-known Street Artist. Even in his hometown of Bristol, Banksy gets no respect from Robbo, and apparently The Rolling Stones are now buffing as well? Team Robbo employs a classic Stones lyric “Paint it Black” by way of engaging the public with a very open demonstration of tough street love and ironically, the only thing you may remember from the effort is the refrain.

Interviewed regarding this Street Art/Graffiti rivalry that sends bloggers and print journalists into paradoxisms of high alert, this local London duck was non-plussed.  While congenially posing for a photo opp on Regents Canal, Mallard seemed to know little about the whole home turf affair and wondered aloud if we had any bread crumbs.

Thanks to Garry Hunter for his in-the-field photography. 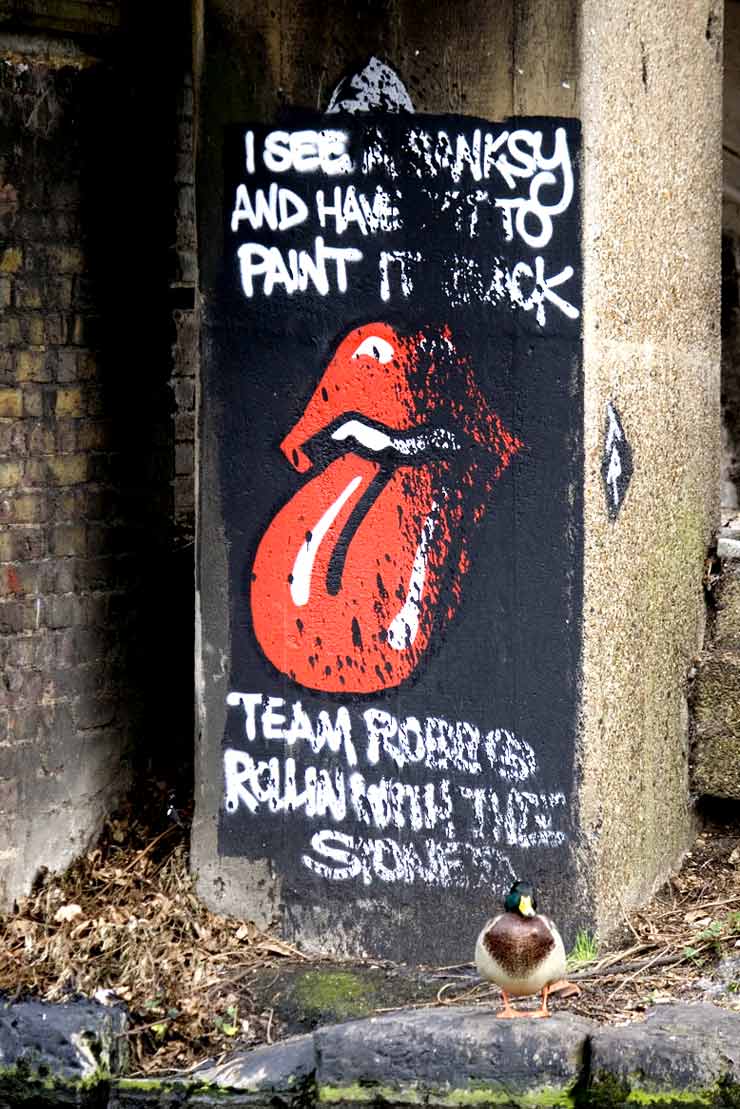 Read more
Berlin based artist Evol took a trip outside his home town across the English Channel to London to create his most recent installation. Known for his ingenious and humorous re-imagining of existing street structures as architecture – sometimes with “giant” tags across them, Evols’ painstaking attention to detail puts you inside his miniature world instantly.
We’re very pleased that writer Garry Hunter joins us today to give BSA readers a better understanding of the work of Evol;

Evol has a fascination for sites that focus on meat production, having previously chosen a former Dresden slaughterhouse for his installation Caspar-David-Friedrich-Stadt. Perhaps influenced by Kurt Vonnegut’s novel Slaughterhouse 5, a fantasy novel set during the firebombing of the city in World War Two, the title references the most important German artist of the early 19th Century. While Freidrich is best known for his allegorical landscape paintings, Evol creates pieces that comment on the very opposite of the Romantic school – urban decay. 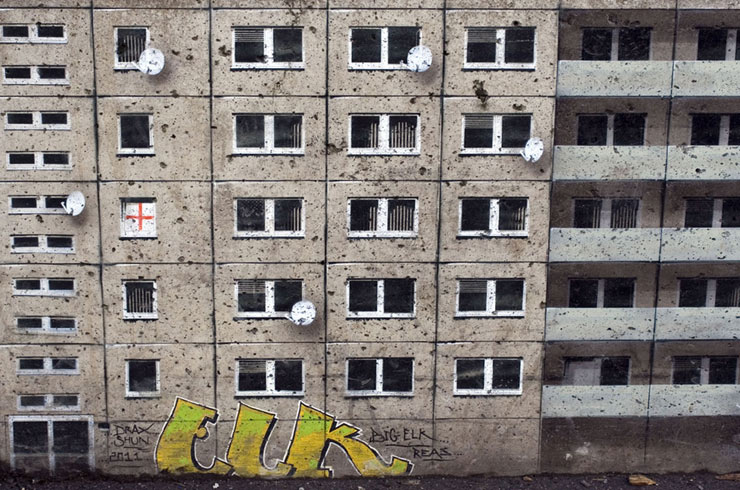 A housing block with a graffiti tag is nothing new, but upon closer inspection these images reveal how cleverly Berlin based Evol plays with scale and social comment. Taking stencilling to new levels of detail, including St. Georges Cross English flags beloved by soccer fans and the satellite dishes, he recently completed this major piece in London’s Smithfield meat market. 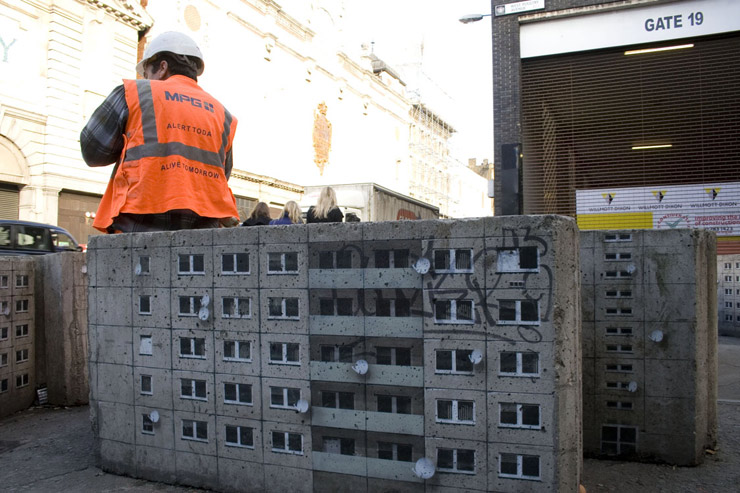 By transforming a dozen concrete blocks into miniature apartment blocks Evol reproduces the monstrosity of the estate that included his former Berlin home into a miniature modernist housing estate. The installation has become a tea break destination for contractors working on the nearby Cross-rail high speed transport link.