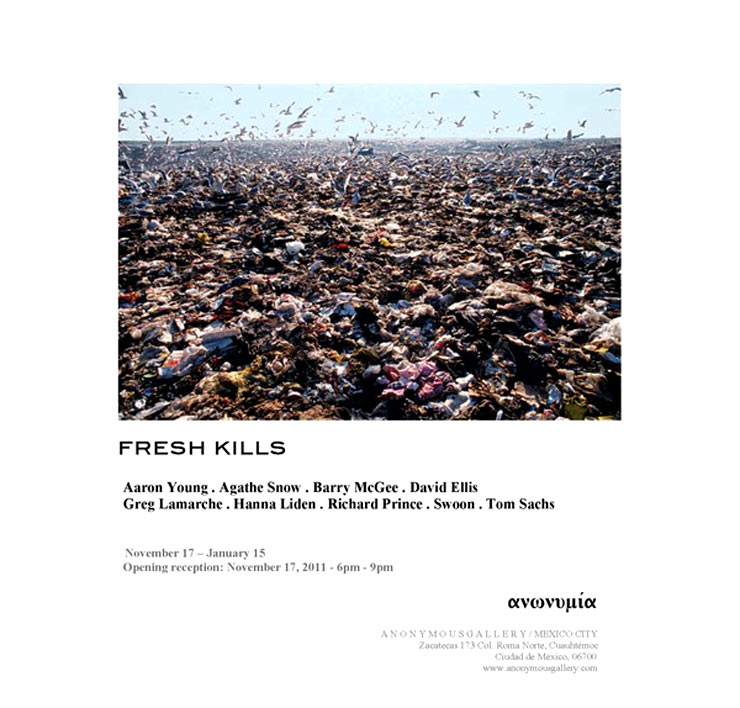 Anonymous Gallery’s inaugural exhibition in Mexico City reflects the gallery’s current
and future program. FRESH KILLS will serve as a small survey of 9 important artists
that have lived and worked in New York City and that are actively influenced by their
surroundings, use materials’ specific to the region and who have directly transformed
the landscape of one of the world’s most dynamic cities.
The selected artists aptly apply resources that most would see as refuse or appropriation
but contextualize those items in their artwork, giving it a completely new vitality and
aesthetic verbalization. With demystifying visuals, materials are treated with subversion,
where process and application are placed in the same framework, giving each object
cultural signification. Ideas of perception are evaluated through development as the
dematerialization of the trivial is transformed into symbol – art.
For over 60 years the 2,200 acres known as Fresh Kills Landfill was where 650 tons
of garbage was added each day. Now a multi-phase, 30 year, site development for the
refuse will become Fresh Kills Park. At almost three times the size of Central Park
it will be the largest park developed in New York City in over 100 years.
The transformation of what was formerly the world’s largest landfill into a
productive and beautiful cultural destination is described as
“a symbol of renewal and an expression of how our society can restore balance to its landscape.”
The exhibition FRESH KILLS is inspired not only by artists that come before this group
such as Gordon Matta Clarke and Sherrie Levine, but also Mexican contemporaries
such as Teresa Margolles, Damian Ortega, Dr. Lakra, and Gabriel Orozco
who have been inspired to use materials that reflect their culture, environment and times.
These artists: Richard Prince, Tom Sachs, Aaron Young, Agathe Snow, Hanna Liden,
Swoon, Barry McGee, David Ellis, and Greg Lamarche on different levels and in different
ways, directly give their art and the culture of New York City the same contextualization
– through process, presentation, perspectives, character and relevance
– RENEWAL!
Read more