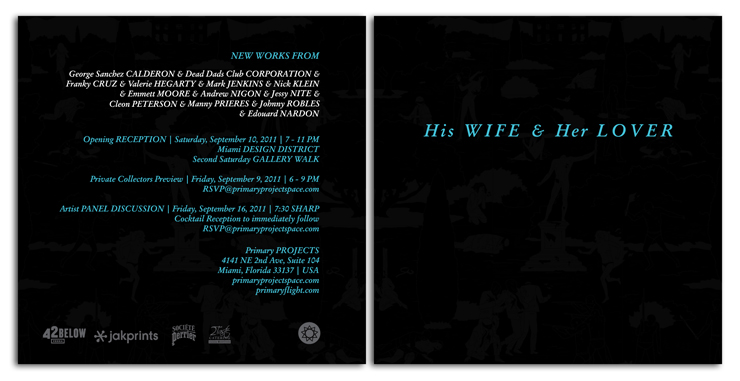 Primary PROJECTS Presents – His WIFE & Her LOVER
A Group Exhibition featuring New Works from :
Valerie Hegarty, Mark Jenkins, George Sanchez Calderon, Dead Dads Club Corporation, Manny Prieres, Emmett Moore, Franky Cruz, Andrew Nigon,            Cleon Peterson, Nick Klein, Johnny Robles, Jessy Nite, & Edouard Nardon
“The urge to destroy is also a creative urge.”– Pablo Picasso
“Destruction is the process of causing massive amounts of damage to something so that it no longer exists. This curatorial project is a response to this standard definition. With His WIFE & Her LOVER, causing damage to something breathes new life into the work and redirects its existence.”– Primary Projects
Miami, FL (August 5, 2011) – Primary Projects is pleased to present His WIFE & Her LOVER, a group exhibit of thirteen artists with a healthy range of artistic discipline and defiance.  Much like the cause and effect commonly associated with the love affair, Primary Projects has assembled a group of artists to call-and-respond to destruction, secrecy, violence, social class, pride and desire.
The opening reception of His WIFE & Her LOVER is slated for Saturday, September 10 from 7:00 to 11:00 p.m. at Primary Projects (4141 NE 2nd Avenue, Suite 104, Miami Design District) and is free and open to the public; complimentary beverages are provided by 42 Below and Perrier. Curated by BooksIIII Bischof, Typoe and Chris Oh, the show will be on view until October 1, 2011.  For more information, please visit www.primaryprojectspace.com or call 954.296.1675.
Valerie Hegarty embodies the soul of this exhibit in her works. The joy of her approach lies in its destruction rather than its creation. Centering her practice on the politics of the American myth, Hegarty’s canvases and sculptures replicate emblems of frontier ethos – colonial furniture, antique dishware, heroic paintings of landscapes and national figures – only to demolish them by devices associated with their historical significance.
Los Angeles-based Artist Cleon Peterson presents a world in which contrasting schemes of morality result in eruptive hostility between social classes. Common in Peterson’s work, he depicts upheavals that embody these inner workings of the individual that can easily correspond to the mechanisms of society. Ultimately, it’s up to the viewer to take sides and feel sympathy or schadenfreude, indignation or catharsis.
Respond, destroy, create, destroy; a cycle that can be viewed as a simplified narrative to Edouard Nardon’s work entitled “Only the Strong.”  Nardon fabricates twenty authentic shivs in the jailhouse tradition with objects assembled from common prison materials.  Nardon then breaks down these objects and reassembles with the sole purpose to destroy again.
These brief examples are a glimpse into the overall mood and complexities romantically displayed in this ominously bright exhibit.  Primary Projects is a multidisciplinary, multifaceted, experimental project space. Powered by artistic collective Primary Flight, the organization’s mission is to develop intelligent projects and installations that can be considered noteworthy achievements for both the artists and curators alike. Primary Flight’s mission is to supply patrons with an alternative destination for creative vision, inspired by years of street level curatorial endeavors at Primary Projects.
The revival of public art over the past 20 years has found an incubator in Miami with Primary Flight, which since 2007 has produced a thoughtful, new brand of outdoor works transcending genres and labels.  Primary Projects takes cue from the attitude and intellect commonly associated with this genre of art.
Exhibition Duration | September 10 – October 1, 2011
Opening Reception | Saturday, September 10, 2011 |  7 – 11 pm
Private Collectors Preview | Friday, September 9, 2011 | 6 – 9 pm
Artist Panel Discussion | Moderated by George Sanchez Calderon | Friday, September 16, 2011 | 7:30 pm SHARP
Read more