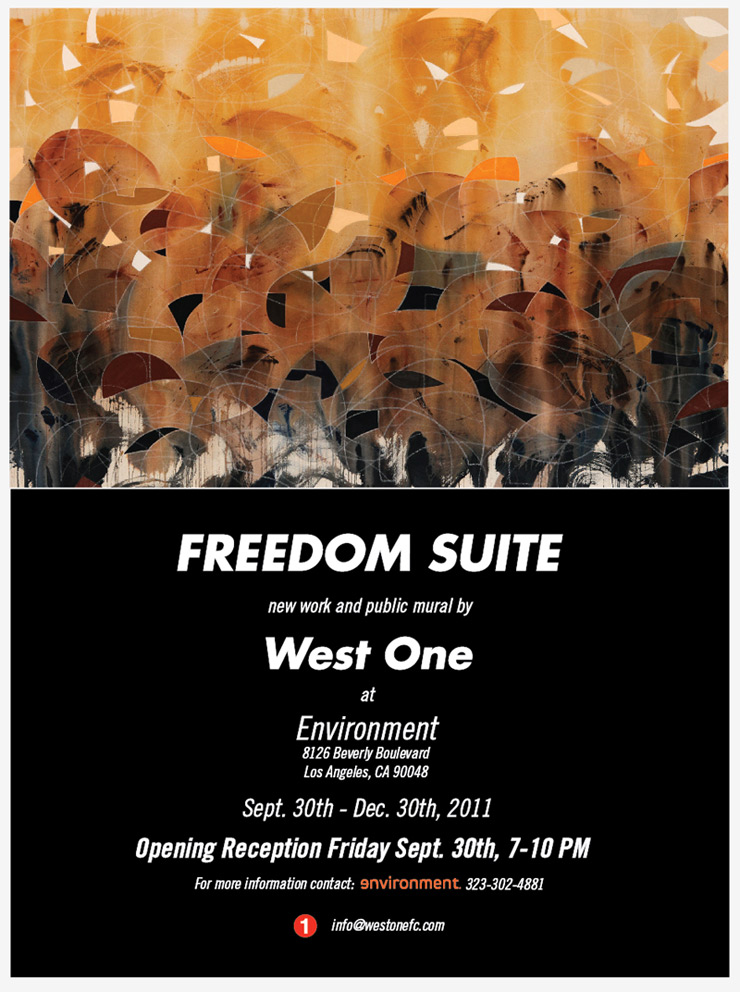 WEST, the renowned graffiti artist-turned-abstract painter, has joined forces with furniture company Environment for a public mural and solo show titled “Freedom Suite” that will be unveiled at a kick-off event September 30, 2011. WEST will exhibit new paintings inside the showroom and will paint a large-scale mural on the exterior of Environment’s Beverly Boulevard, Los Angeles location creating community through shared ideas, knowledge, culture and art. Some proceeds will be donated to the charity Jamaican Kids <http://www.jamaicankids.org/Jamaican_Kids/Our_mission.html> .  “We live in a vast city where everything’s at right angles,” WEST said. “My work is movement and energy. It’s organic. The viewer will see different things – maybe themselves, maybe the city. Maybe the broader environment. I hope to make us look at our space, our environment, a little differently.”

Open to the public starting September 30, 2011, the WEST exhibition will be on display at the Environment Furniture Showroom, 8126 Beverly Boulevard in Los Angeles through December 31, 2011.

Recognized as one of the most prolific artists in the New York Graffiti scene throughout the 1980’s and 90’s, West has been painting publicly since 1984. Born and raised in New York City, the great grandson of Russian-Jewish immigrants, West began painting on the number 1 Broadway local subway. Throughout the mid to late 80’s West became known for his clean letters, and as one of the last of a handful of artists who was actively painting just before the demise of subway Graffiti in New York. Throughout the 1990’s, West, along with his crew Fame City, was a major influence in the New York City graffiti movement by spearheading concept-driven, thematic productions which are now standard in large scale graffiti mural painting.  Since 2001 West has taken a radical departure from the uniform structure of traditional graffiti letters and technique. In his current work he has pushed into the realms of abstraction and stripped the art form of all of its traditional trappings of color, medium, and process. As a result a new and unique language has emerged in his work.  West first exhibited in 1985 with Librizzi Gallery’s ‘Graffiti & East Village Artists’ show, and has since exhibited in numerous solo and group shows in New York, and internationally.