FOR all you Valentines:

Says Will Work For Good, “We worked with Eric Wareheim on the aesthetic direction for his video for Major Lazer’s “Pon De Floor” featuring some of NY’s raddest dagga dancers. We wanted to take them off the typical club floor and put them on more mundane floors in an imaginary neighborhood where they could go about their business in private. All of the home environments were created as large paintings which were then photographed and transformed into a bizarre real estate fly-through by the dudes at Fatal Farm. Additionally we created a series of vector patterns used for the “otherworlds” featured throughout the video. All in all a sick mix of low/high tech and Eric’s always awesome visions.”

FOR all you Would Be Valentines:

I’m sure you kids don’t remember this but WAAAYYYY BACK in the day before Virtual Lovemaking Suits, we had to Hook Up using CHAT and our imaginations

Not sure if we caught all of the street artists but I saw Gaia, FKDL, C215, Katsu, Poster Boy, Dude Co, Mark Cavalho… who else?

The Williamsburg Salsa Orchestra, based in Brooklyn NY, plays “Wolf Like Me” by TV On The Radio. Produced and arranged by percussionist Gianni Mano from forthcoming album, “Keys To The City”. Slideshow of local pics and street art are by Miss Heather at newyorkshitty.com.

Early Animators used this same technique for experimenting with new stories (I just made that up. I’ve never seen this stuff before)

“The Dirty Show” in Detroit for Valentines 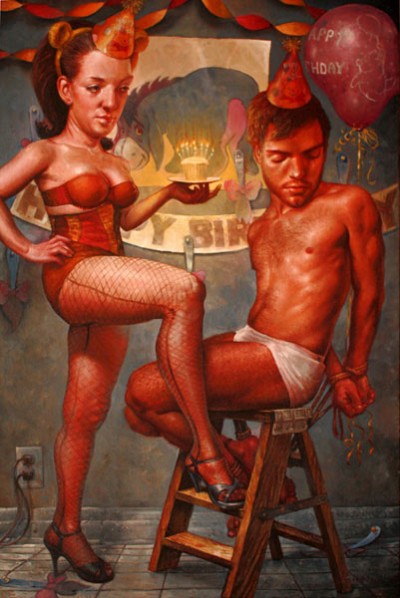 The Sexy “Street Crush” Show from Brooklyn Street Art a year ago.

What the heck does this have to do with street art and graffiti art? Hang out till the second part of this video. We won’t likely forget his famous robotic spray-painting of a white dress in ’99.

MUSIC The DJ was Jesse Mann streaming live on DailySession.com

And Speaking of Jerkville: Dashing Men Available for Dating

Too Cold For Coney Island? Not Virtually!

Forget Avatar – Put Grandma in front of a Green Screen!

You don’t have to stay in a loveless, abusive relationship with your Big Bank.

This show is going to be off the hooker.

It’s for all the fans, that’s you. 42 artists, that’s all we gotta say, and lots of fun because it is all about community, and creativity, and love.

You’ll be hearing more about it as we get closer – in the meantime read all about it here in the calendar.

And In Preparation for Street Crush…

And for those of you who will want to be practicing up on yer def mooves for the Ladaays of the Eightaaays – here is an instructional video below. Stand up in front of your computer please and practice according to the directions.

I only needed like two minutes and I totally got it. Some other people (no names please, people) may want to view it in it’s entirety.

STREET CRUSH:
Sexy New Work from the Street Artists
You Have a Crush On.

A Show for the Fans.

BROOKLYN, NY-BrooklynStreetArt.com and AlphaBeta are thrilled to be hosting a timely and sexy show of brand new art by veteran and rookie street artists who are on the scene today redefining our ideas of street art. Working around themes of “Love, Sex, and the Street”, well-known street artists like Aiko and Jef Aerosol dig deep for fresh takes on gritty street ardor alongside relative whipper-snappers like Cake and Poster Boy.

In addition to a salon-style show, the opening party will feature live art collaborations and installation.

THE STREET ARTISTS You Have a Crush On

An unprecedented killer lineup of many of 2009’s best in one Brooklyn location, “Street Crush” will run from February 13 until February 28 and will feature work from an artist list that includes:

For more information on Brooklyn Street Art and to see images of the “Street Crush” artworks in the days before the show please visit http://www.BrooklynStreetArt.com

To entertain the Opening Party street art fans, exotic passions will be alerted with Street-Tart Burlesque performances by 4 of today’s award-winning NYC burlesque artists – thrilling, titillating, and Twitterpating the audience in the back-room gallery at AlphaBeta. The rollicking rollcall includes Nasty Canasta, Clams Casino, Harvest Moon, and your MC, Tigger!

A funky loveshack built by artist and set-designer J. Mikal Davis and lorded over by Madame Voulez-Vous, will awaken furtive crushes in the crowd AND raise funds for Art Ready, a mentoring program created by SmackMellon Gallery to serve NYC High School students who are interested in the arts.

Live DJ sets by DailySession.com will be pumping and streaming live from the “Street Crush” event over the internet all night.

The featured Street Crush DJ will be Jessee Mann, a Williamsburg hottie and self-professed music nerd who plays weekly at Bembe and has mooved booties all over the whirl.

Look out for a special performance by electronic drummer Kamoni, who flagellates the street-sin out of you with a solo live audio collateral collage of beats, sounds, and samples on stage. yeow!

AFTER PARTY AT COCO66 NEXT DOOR

Immediately following the “Street Crush” show opening, guests are invited next door to continue celebrating their new found love at Coco66 and the 68 bar/restaurant, where the booty-shaking music continues and site-specific installations by 2 Brooklyn projection artists, SeeJ and SuperDraw, will blow minds with their original forays into the next horizon on street art.

BIOS OF THE PERFORMERS

Jesse’s musical style encompasses all that is soulful and funky, incorporating familiar sounds with obscure forgotten classics and upfront remixes. In a single DJ set he can travel effortlessly between vintage funk and disco to Afro-Latin grooves, house, techno, hip-hop, and everything in between.
His DJing career has taken him far and wide in the last nine years; Paris, Berlin, Vienna and England, to San Francisco, Miami, and Puerto Rico. He has played at many of NYC’s biggest and most revered clubs, its most chic and exclusive lounges, and its most intense underground parties. Favorites include APT, Cielo, Limelight/Avalon, Love, Sullivan Room, Hotel QT, Socialista, Goldbar, Lunatarium, 3rd Ward, Cabaret Sauvage (Paris), Batofar (Paris), Watergate (Berlin), Roxy (Vienna). Currently Jesse is resident DJ at Bembe weekly with the BodyMusic party.

Kamoni
Kamoni is a Brooklyn based sound designer, live performer and sonic experimentalist. His work encompasses everything from live electronic shows to commercial music production and sound library development. Kamoni has acquired numerous credits on TV, film and animation soundtracks while consulting with music software pioneers such as Ableton and Native Instruments. He launched Puremagnetik in 2006 and his work has been featured in Electronic Musician, Sound on Sound, XLR8R, Remix, Computer Music, Knowledge, Keys and numerous other publications.

Tigger! (the MC) is The Original Mr. Exotic World! – Best Boylesque 2006 at The Burlesque Hall of Fame in Las Vegas. Winner of Four Golden Pastie Awards including “Performer Most Likely to Get Shut Down by the Law” and “Most Unpredictable Performer.”, and “the King of Boylesque.” The New York Times called him a “hysterical and acrobatic man in drag,” Next Magazine called him “the taboo-defying dynamo,” and San Francisco tried to ban his striptease.

Nasty Canasta is the co-producer of Pinchbottom (“Best Burlesque in NYC” – NY Magazine, “Most Innovative” – Miss Exotic World Pageant) and the impresario behind Sweet & Nasty Burlesque. Her performances combine classic burlesque, pop culture, and a theatrical sensibility to create a dazzling mummery of perplexing proportions. The reigning Cheese Queen of Coney Island, Nasty is, quite possibly, too damn clever for her own good.

Harvest Moon otherwise known as the Sultry Siren of Burlesque has been sauntering on burlesque stages since 1995. She has performed in Sydney, Paris and many cities in the US. She is founder of award-winning troupe, The Cantankerous Lollies. In the summer of 2008, Harvest toured the Netherlands and Italy in a special showcase of American Burlesque “Cabaret New Burlesque”. From her homebase in New York City she continues to push the frontiers of modern Burlesque with each new act.

Clams Casino has been called a “Burlesque Queen” by the New York Times, and is the proud winner of the awards for Most Comedic and Most Innovative at the 2008 Miss Exotic World Pageant in Las Vegas. Clams is the co-producer of the Gameshow Speakeasy at the Slipper Room, AM Gold at Coney Island, Killer Queen Burlesque and Borderline Burlesque:Midnight Madonna Madness at the Zipper Factory, and many other pop-culture obsessed burlesque shows around New York City and the Eastern Seaboard.

An on-going celebration of the creative spirit, BrooklynStreetArt.com presents “Street Crush” as the 4th street art event thrown in the last 10 months.
Previous events include;

* April 2008: a benefit street art auction of work by 27 street artists at Ad Hoc Art in Bushwick that raised money for the youth and family creative arts and mentoring programs of Free Arts NYC (www.freeartsnyc.org) and launched the book “Brooklyn Street Art” published by Prestel worldwide and authored by Steven P. Harrington and Jaime Rojo.

* Sept 2008: “Projekt Projektor”, a first-ever curated show of projection artists as street artists in a live show by 6 projection artists on the side of the Manhattan Bridge and the Pearl Street Triangle during 2 nights of the Dumbo Arts festival on September 26 and 27.

BANNERS and POSTERS FOR YOU TO USE

A silent auction to benefit the youth and family creative arts and mentoring programs of Free Arts NYC is being generously hosted by Ad Hoc Art on Friday, April 25th to celebrate the launch of “Brooklyn Street Art,” followed by a booty shakin after-party.

A silent auction to benefit the youth and family creative arts and mentoring programs of Free Arts NYC is being generously hosted by Ad Hoc Art on Friday, April 25th to celebrate the launch of “Brooklyn Street Art,” followed by a booty shakin after-party.

BROOKLYN, NY—Ad Hoc Art is thrilled to be hosting and supporting a special silent auction benefit Free Arts NYC and to celebrate the launch of Brooklyn Street Art, a new book of photographs by Jaime Rojo, designed by Steven P. Harrington, and published by Prestel.

Ad Hoc Art is generously donating their gallery space for the celebration and silent auction of approximately 25 works by well-known, emerging, and yet to be discovered artists who know no boundaries and follow no rules—their artistic turf is the public gallery of the Brooklyn streets.  The artists, whose work animates the pages of this new full-color book, are donating their original or editioned works to be bid up and auctioned off, with all proceeds from the winning sales going directly to benefit Free Arts NYC’s creative arts and mentoring programs for at-risk children and families in New York.

Some of the artists have participated in Free Arts NYC’s programs prior to this event and are creating original work to donate to this benefit event to generate significant support for Free Arts NYC.