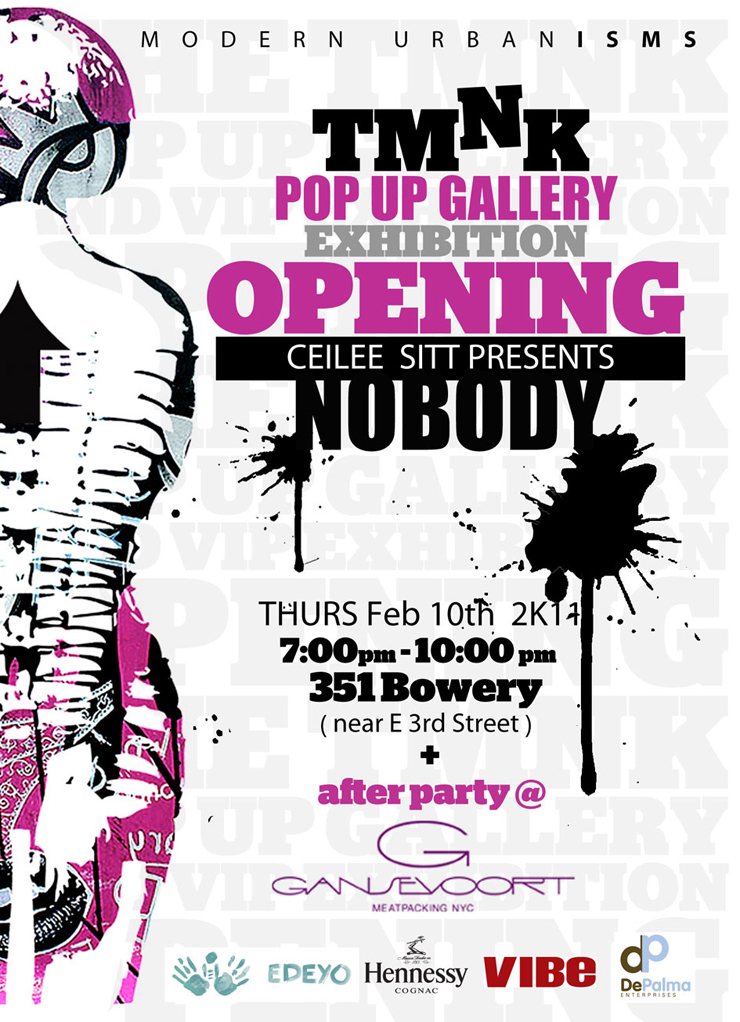 Check out his profile and interview. You can read TMNK’s blog and view his phenomenal and original artwork posted on his website.

Photographer, painter, music producer, tattoo artist, Nobody is an artist whose creative abilities defy pre-conceived labels.
He began his career as a talented fashion photographer, when he found himself in Paris photographing the designers’ collections for Essence Magazine. He has received national recognition for his digital editorial illustrations.

More interested in making art than making a name for himself, Nobody began his extraordinary artistic production outside the influence of the art galleries world.
Showing his poignant, provocative, and bold art under the moniker of “The Me Nobody Knows” or simply “NOBODY”, he deliberately used the pseudonym to emphazise his similarity with the other talented artists in this community ignored by the art
world.

In the great tradition of synergies among artists which reveals the desire of contaminating their art, the collaboration with his fellow street artists (Avone, Ski, 2Esae) has brought to life works of great intensity.

A Soho-born street factory that considers the Big Apple sidewalks as the only possible stage, these artists collaborate without ever losing their own individual perspective and their own creative message.

Nobody likes to refer to his unique paintings as urban hieroglyphics. Constructing, assembling, deconstructing, painting, and scratching on any surface he can find, his paintings are modern-day cave drawings, offering reflections, observations, and discussions that the viewer is invited to join.

Nobody’s mix media paintings have drawn the attention of international curators, collectors, celebrities and even other artists! Well-known raw artist Gus Fink had this to say: “I think your one of greatest out there.

I really think you’re work is superb. It’s brilliant…I can’t believe how wonderful your work is. A little bit of Warhol, Basquiat, Picasso and you of course.” (Art in America)

Nobody’s mix of symbols, abstract figurative drawings, words about the current socio-political background, defying any comparison, is uniquely irreverent and poetic at the same time, comprising all the strengths and the depth of the street art.

AS: How much are you influenced by New York and how much are you influencing New York?
TMNK: New York is the perfect place for an artist like me; its walls resemble the inside of my mind. A myriad of messages, thoughts, and images pervade the urban landscape. Somehow these impressions are  filtered out and onto the canvas by me in a way that some have connected with. Me Influencing New York? ! Hell yeah. But why thinking so limited. I hope I am influencing the world.

AS: What will be your next step in the art biz?
TMNK: That’s classified information. NOBODY KNOWS (wink). What I do know is that I am chasing Picasso.
That is to say, I am focusing on developing a workman’s like discipline. I hope one day, to have as many credible works as the maestro. But along the way I hope to have conversations with the world it won’t soon forget. My concern with business is only in as much as I need to make money to
survive. But as an artist, I think like Van Gough or Leonardo Da Vinci. I’m constantly looking inward and outward to see what  I can discover.

AS: Any comment about the new president Obama?
TMNK: The Book of American History has a new cover, it will be up to the hearts and souls of each of us to write new chapters of humanity, equality, and mutual respect.

AS: Hi Nobody, I know you are very very very busy. Could I ask you few questions?
TMNK: Please man.

AS: What is your philosophical viewpoint behind “Art is my weapon”?
TMNK: I try to find creative solutions to problems. In a world filled with so much hate, violence, and intolerance I use my art as a weapon against these manifestations of ignorance.
Yes, I am maybe nobody, but I am not powerless. I fight back through creative expression.

AS: You consider your paintings as “Modern-day cave drawings”. What is your message to people?
TMNK: Not so much a message, I am simply my sightings and experiences, and my interpretations thereof. I share stories about what I saw/experienced, but I also leave room for the viewer to interpret from their viewpoint. I hope my paintings make future generations think and ask questions. I would love to be a part of a future discussion on politics, economy, culture 100 years from now. I simply paint what’s  in my head and in my soul. I throw my pebble in the pond hoping it ripples outward a great distance, hoping someone  anyone is moved by this disturbance I’ve caused.

AS: Someone compares you to Picasso, Basquiat, and Warhol. What do you think about that?
TMNK: I’m honored, as I respect their work, their talent and their accomplishments. I laugh at those who say my work is just like Basquiat, as it shows their ignorance. They see the crown, and they say aha, he copies Basquiat. And to them I have left a message in my paintings “BDO Me,” Basquiat doesn’t own the crown symbol. But these things are the business of critics and curators.