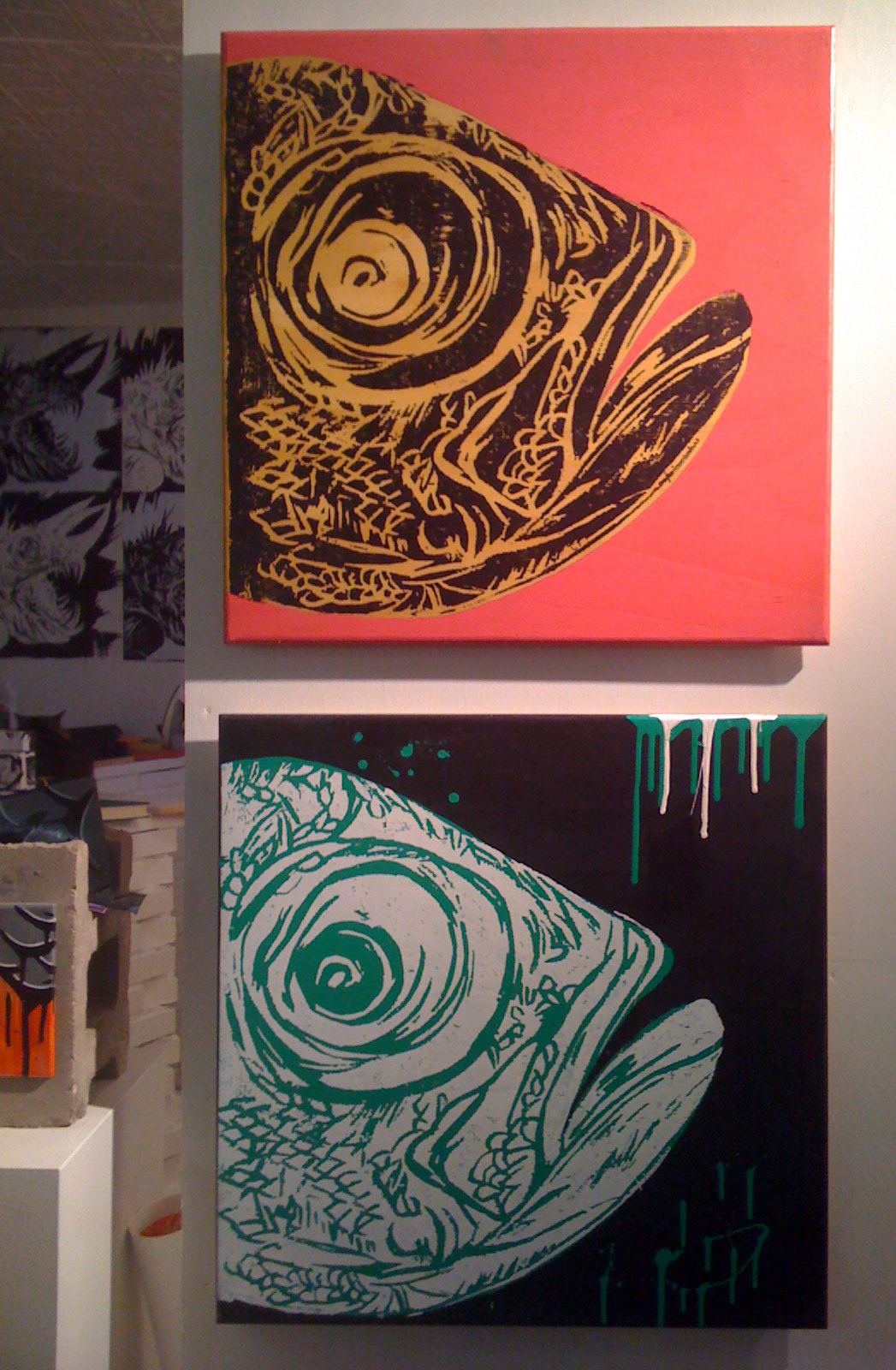 Some work in progress on the gallery floor from Keely (photo Steven P. Harrington)

NYC’s unemployment rate is nearing 10% (higher than the national average by a point), the heat index in the City this week was as high as the crowd at Glasslands, we’re losing Arts programs in the schools left and right, Ad Hoc is shutting down their main gallery space, and Jennifer Anniston was thrown into the trunk of a car.

Who would believe in this topsy-turvey New York that a GALLERY celebrating Street Art is actually OPENING?  You read it right. It’s called Pandemic (explanation below) and its on the South Side of Williamsburg Brooklyn in a space that used be the DollHaus, a Gothic-themed and deliberately disturbing gallery with Kewpies on skewers and mutilated cyborg dolls with Lydia-Lunch eyes. Even though it’s a little off of the main Williamsburg drag, it’s just a block from the first artist/hipster outpost “Diner”, and two blocks from the favorite place for Wall Street big-bellies to take guests for a daring trip across the river for steak on their corporate card , “Peter Lugers“

Now the newly painted space has a fresh air of possibility that washes over you when greeted by the sunny owner of Pandemic, Keely Brandon, an artist and friend of the street art scene for some time.  This week we stopped by during the installation and the gleaming walls, new lighting, and shiny floors bespoke a world full of possibilities.  Saturday night the small gallery will host a group show of work by no less than 14 street artists, an impressive show of strength for the Grand Opening.

Brooklyn Street Art: A new gallery!  How did you hook this up?
Keely: It kinda just fell into my lap, I was apartment hunting and was offered a storefront instead. At the time it was a jewelry store. I started thinking about how awesome it would actually be to have a gallery space that I could run my own way. Free to display the art and merchandise of myself and other artists I respect. So I just went for it.

Always willing to lend a paw around the gallery! (photo Steven P. Harrington)

Brooklyn Street Art: Is “Pandemic” referring to something in particular, or just a general feeling of dread?
Keely: It’s the concept of a creating a worldwide epidemic, but in a positive way! expanding the global consciousness of our breed of art.

Brooklyn Street Art: Have you ever had a gallery before?
Keely: Nope

Brooklyn Street Art: How did you chose the artists that are involved with this show?
Keely: I chose a group of prolific street artists who’s artwork and dedication I really admire. Many have worked together before on projects, and create an awesome looking show.

Brooklyn Street Art: This place used to be a gallery for baby dolls dressed in gothic garb – babies with black lipstick and white eyes, etc.  You find any heads rolling around in the closet?
Keely: Ha.. yea actually when i first moved in there i could have sworn the basement was haunted! No heads, but a lot of fuschia to paint over!

Brooklyn Street Art: Are you following a particular theme for this show, or is it mainly a group show?

Keely: No real theme… The name of the show is pandemic 37 – which is basically the gallery address. The show is just a grand intoduction to the place..

Brooklyn Street Art: Outside of the artists in the new show, what art excites you the most?
Keely: hmmm.. I like alot of different things.. strange 70’s artwork. Peter Max, Marushka, and other obscure wall hangings. I love old illustrations in wildlife books, deep sea creature photographs and dinosaur everything. Anything with gnarly teeth!

You KNOW what time it is! (Royce Bannon) (photo Steven P. Harrington)

One of the more entertaining pieces in the show is the working clock on the face of one of two monsters by Royce Bannon.  Royce explains the new development”

BSA: What made you make a clock?
Royce: I made a clock because I like functional art.  It looks cool and tells the time too.

BSA: What new skill did you use to install it?

Royce: No new skills were used in the making of the clock just the same old skills

BSA: What room of an apartment would it be more appropriate for?
Royce: Probably the kitchen.

In addition to celebrating the opening of the new gallery, everyone will be celebrating the new Street Art Blog by celebrated photographers Rebecca Fuller and Luna Park.

Their exciting new endeavor, The Street Spot, will feature many of the images of the street that fans have faithfully followed for the last few years.  Besides being avid documentarians of the ever-evolving street art and graff scene in NY, Park and Fuller have a deep reservoir of knowledge and stories to draw upon.

TheStreetSpot.com will surely add to the richness of this vibrant scene for all the fans of the wacky world of street art.  The AfterParty is where we’ll raise a glass to these fine individuals and their dream.

So that’s TWO great openings in one night!  Things are LOOKING UP!

Familiar names in a new gallery