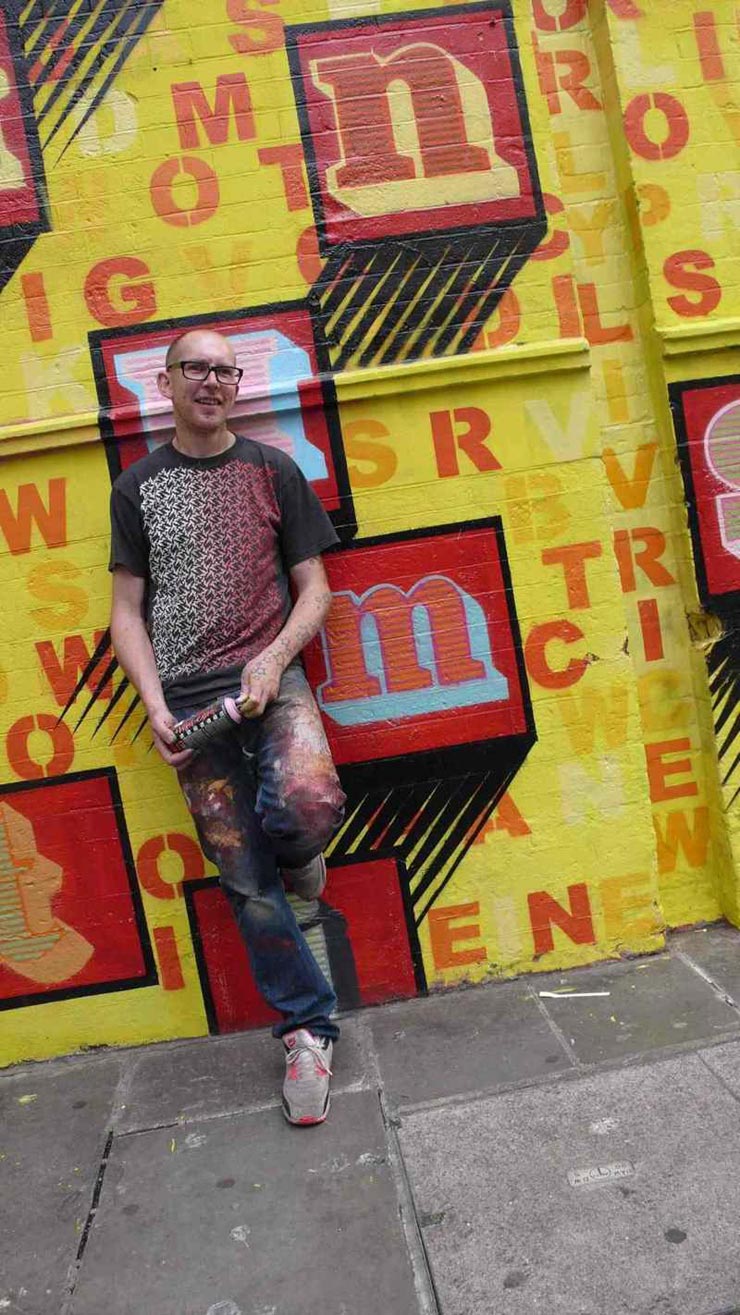 Exhibition on view through April 2, 2011

San Francisco, CA-White Walls gallery is pleased to present, ‘GREATEST’ a solo exhibition by London-based artist, Ben Flynn a.k.a. EINE. The opening reception for ‘GREATEST’ will be held on Saturday, March 12, 2011 from 7-11 PM. The exhibition will be on view from March 12, to April 2, 2011 and is free and open to the public.

‘GREATEST’ is an art exhibition by the artist, Ben EINE, that will utilize both gallery and public space as a two-tiered platform for the artist’s visual expression. EINE’S work is a large-scale study of the shape and structure of the 26 letters found in the modern English alphabet in varied typefaces, color configurations and word arrangements. In the public spaces of San Francisco, EINE will be painting each letter of the alphabet on various walls around the city. A further ten canvases of his work using spray paint, acrylic, and glitter will be on display at White Walls gallery.

In an effort to engage the community through the creation of public artwork, EINE will be painting the entire alphabet throughout the city of San Francisco over the course of several weeks on walls and shutters. This public execution of street art aims to offer viewers a more participatory role in the observation and evaluation of artistic creation. All members of the community from collectors and appreciators to first-time viewers are invited to partake in the dynamic program of events that surround this ambitious undertaking. White Walls gallery will be producing a schedule of live installations, a continually updated map of works as they appear around the city, a public artist talk, and an evening of film screenings related to EINE’S art.

Rooted in the subcultural practice of graffiti, EINE moved into the more socially acceptable expression of street art in the early 2000s as a way to become a full time artist creating public works that were perceived as more legitimate. However, his fundamental art practice has essentially remained the same–he continues to paint words and letters on walls on the street. Letters either appear alone, on shutter fronts, or as words on walls such as ‘scary’, ‘vandalism’, and ‘monsters’ rendered in bright and amiable colors. In this way he turns negative words into positive ones. The contrast of jovial shapes and colors with dark sentiment is also a tongue-and cheek nod to the artist’s furtive and taboo origins as a graffiti writer.

The street art component of ‘GREATEST’ is complimented by a selection of works to be displayed inside the gallery. These works are part of EINE’s continual exploration of letters and words as his quintessential format for aesthetic inquiry. EINE’s studio process involves a layering of stencils onto the primed and painted canvas. Re-envisioning basic Victorian typographical structure, he begins with vintage hand-printed wood block fonts, reworking and refining them until he is inspired to cut the final stencil. This working methodology marks the continual evolution of the font by the artist’s hand.

In the early 2000s, EINE began a symbiotic collaboration with the street artist, Banksy. The artists worked and exhibited together for several years traveling to Australia, Berlin, Vienna and Denmark where Gallery V1 held the Banksy vs. EINE show in 2003. EINE also collaborated with Banksy on the famous Palestinian Wall project.

In 2010 the Prime Minister David Cameron presented President Barack Obama with a piece of EINE’s work as a gift. This diplomatic exchange between the world powers catapulted EINE’s work into the limelight on both sides of the Atlantic. GREATEST will be EINE’s first show in the US since his work was given to President Obama.

EINE is a London-based artist whose career started over 25 years ago when he tagged anything he could get his hands on. Although EINE’s work was initially illegal, he created a distinct typographical style that has made him one of London’s most ingenious and original street artists. His work has been exhibited in Los Angeles, New York, Toyko and throughout Europe. His painting commissions have also taken him worldwide with trips to Israel, Australia, South Africa and India. EINE was invited to take part in Banksy’s Cans show in London. After EINE worked with Banksy he joined ‘Pictures on Walls’ where he worked as their resident silkscreen artist and produced prints for their artists including Mode 2, and Banksy. He recently exhibited at The Carmichael Gallery of Contemporary Art in Los Angeles.

White Walls Gallery is the premiere West Coast destination for urban art. Combined with the Shooting Gallery just next door, this 4,000 sq ft space is one of the largest art galleries on the West Coast. Justin Giarla founded the gallery in 2005 with a commitment to furthering the urban art movement that stems from street art and graffiti art. Named for its plain white walls, we take a backseat to the real focus: the art.