After leaving the sight of the first mural for the Living Walls Conference I found bugs pressed in between the pages of my notebook; these bugs came in addition to bugs in my ears, up and down my legs and arms and threatening to fly in my mouth while visiting the wall. The almost 100 foot long and 35 foot tall wall painted by Doodles backs up to a wooded area on the BeltLine lovingly called “the jungle” by the people who assisted him and came to watch as he crawled on top of a three level scaffolding to paint, sometimes sporting a respirator.

This “jungle” is a wooded area with vines dangling from the treetops and creates a nice seclusion from the cold buildings and shopping center that surrounds the wall, making it nearly forgettable that it is yards away from a barbwire fence and the intersection of Ralph David Abernathy and White Street in the West End. 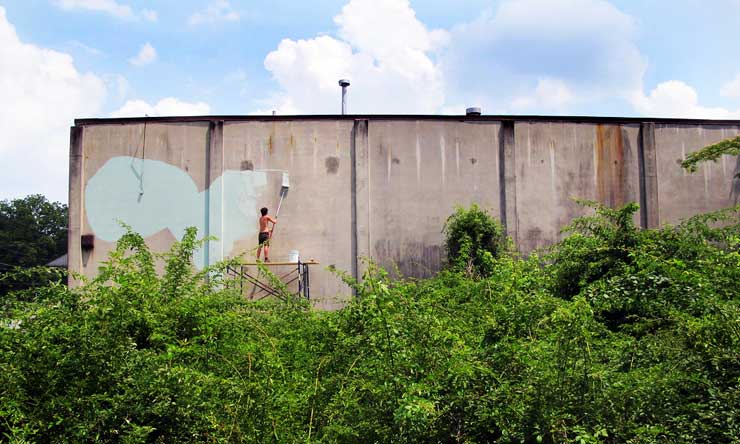 The contradictory locations that sit on either side of the first wall is fitting for a mural which functions with so many ideas that are both in contrast to each other but also in close proximity. Doodles developed his theme over time, letting the idea grow as he worked. The direction of the wall changed while the artist was on a short break from painting. Flooded with constant news of the BP oil spill he decided that it was an issue he wanted to cover in his piece for Living Walls. Doodles abandoned the idea of painting a man shooting an arrow at the moon and developed the idea of a beautiful man with sinister intentions. The man, nicknamed “Poseidon”, wraps around the large warehouse holding a large trident with a snake weaving through the middle spoke, creating the illusion of a money sign. The black trident penetrates the man’s abdomen, which resembles the ocean; in this way, the trident mimics the oil leak. 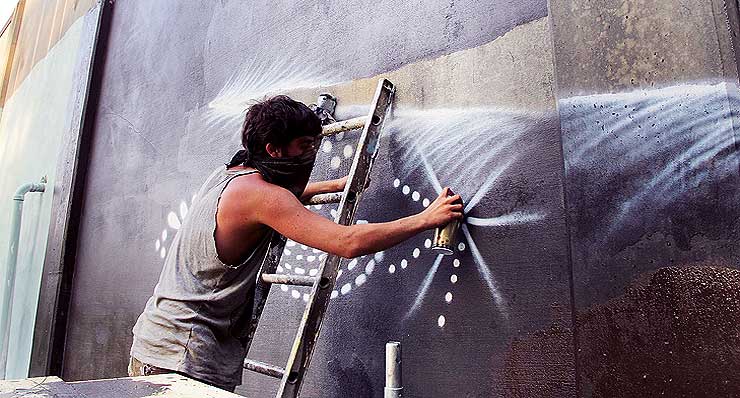 Through out the work folk art style designs are infused with signs that represent the Poseidon figure’s power; Doodles said the single eye represents a God-like power. These signs of power coexist with symbols of the oil spill, like a wail’s tail that resembles an oil well.

Despite the heavy subject mater, there is simplicity to the wall. Not to distract from the message of the oil spill, Doodles left it up to the logos and symbols to speak for the art without distraction of a multitude of colors. In this way, it is the logos and the imagery that stands out in the piece, most importantly the BP flower on the Poseidon figure’s face. 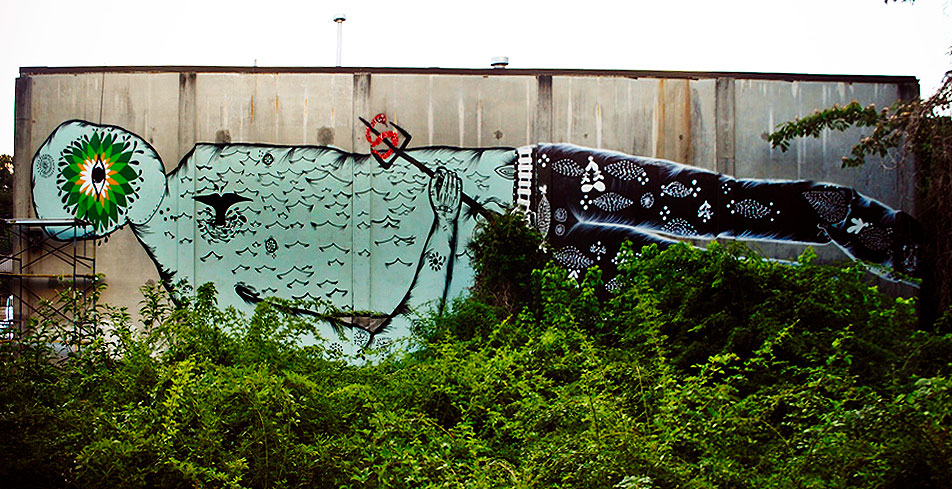 Doodles said that he liked the idea of using the universal language of logos and symbols to convey his message.

Doodles is a 22 year old who smiles often, and has a sweet easygoing nature. Originally from an island off the cost of Washington state. He went to art school for a short time before hoping trains and hitchhiking. He has been working on his art for four years now. Doodles’ piece is on the corner of Ralph David Abernathy and White Street adjacent to BeltLine. The BeltLine is a 22-mile path incorporating railway, trails and paths that once functioned in the mid-twentieth century and has since been reworked to feature public and interactive art.

Doodles work is the first Living Walls mural for the BeltLine Project.

Here’s a Video from Atlanta: Another Street Artist Opinion on BP

And Finally, this New Sticker on the Streets in NYC

Thanks to Justin for sending this in… 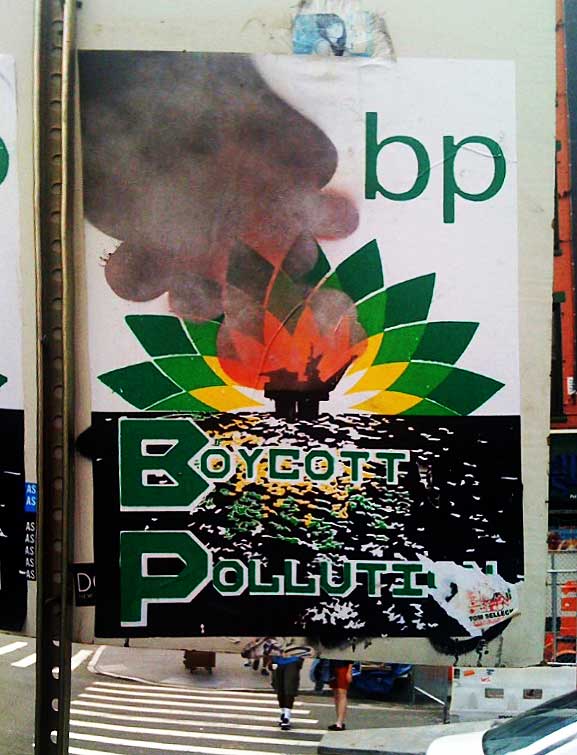 For more information on the Beltline Project go HERE

To learn about the Living Walls Conference go HERE

To support the Kickstarter Campaign for Living Walls go HERE