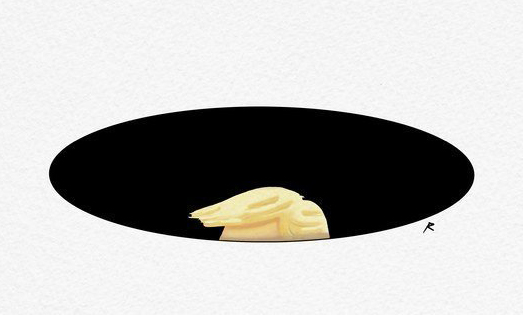 As New Yorkers and art lovers we really appreciate the cover of the new issue of The New Yorker magazine. It is an image of a side-show, now center-stage, New Yorker sinking into a hole. Nearing one year since his inauguration, he obviously wanted to appear presidential in the Oval Office this week when referring to refugees coming from places where the population is predominately dark-skinned as people who come from “shithole” countries. “In the Hole,” by artist Anthony Russo, is the name of the piece. 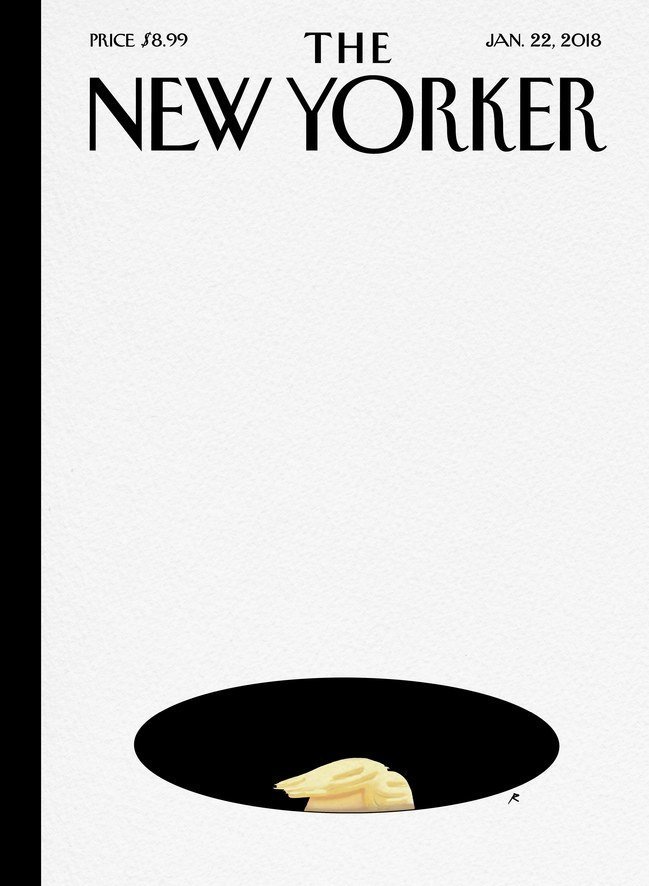 As a reminder, New Yorkers have had the misfortune of witnessing the behaviors and attitudes of Donald Trump for about four decades and this kind of statement is unsurprising, if far far below what we expect from a human, much less a president. What is dismaying is that even though his approval ratings are currently at a very low of 39%, that still means that 4 out of 10 Americans approve. It also means that regardless of anything he says or does, many soulless legislators are happy to have him as long as they can force through legislation that benefits them and their wealthy donors.

Our country’s legacy of racism, classism, and subjugation of selected peoples is shameful, and we expect our leaders to help us rise above and to lead us to an equitable, more peaceful, perfect union.

These behaviors and statements only confirm what New Yorkers already knew, and this stuff takes us in the opposite direction that most people are working toward. The referendum on one year of this presidency is easy to see on the streets here, with new Anti-Trump Street Art every day, every week. We pause here today to remark on the sinking feeling that pervades almost everything, except the bank accounts of the wealthy, whose lot has continued to rise in almost every way since the election.

“The lawmakers were describing how certain immigration programs operate, including one to give safe haven in the United States to people from countries suffering from natural disasters or civil strife.

One of the sources who was briefed on the conversation said that Trump said, “Why do we want all these people from Africa here? They’re shithole countries … We should have more people from Norway.”

The second source familiar with the conversation, said Trump, who has vowed to clamp down on illegal immigration, also questioned the need for Haitians in the United States.”