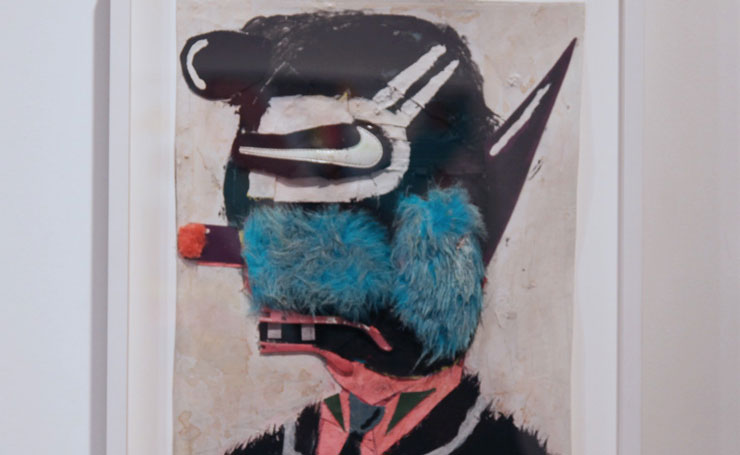 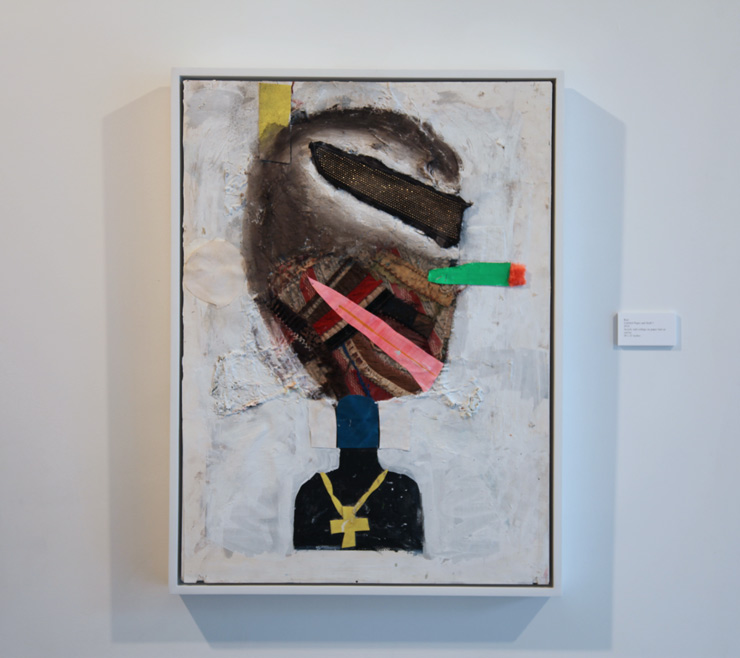 The first full show of studio work by Brooklyn Street Artist Bäst in a gallery in about four years declares that the artist is currently running loose with an intoxicating freedom of gesture and brush strokes and character that reaches back to a creamy pastel abstractionist block party from mid-century, catching the eye of a neon neo-folk parade en route. 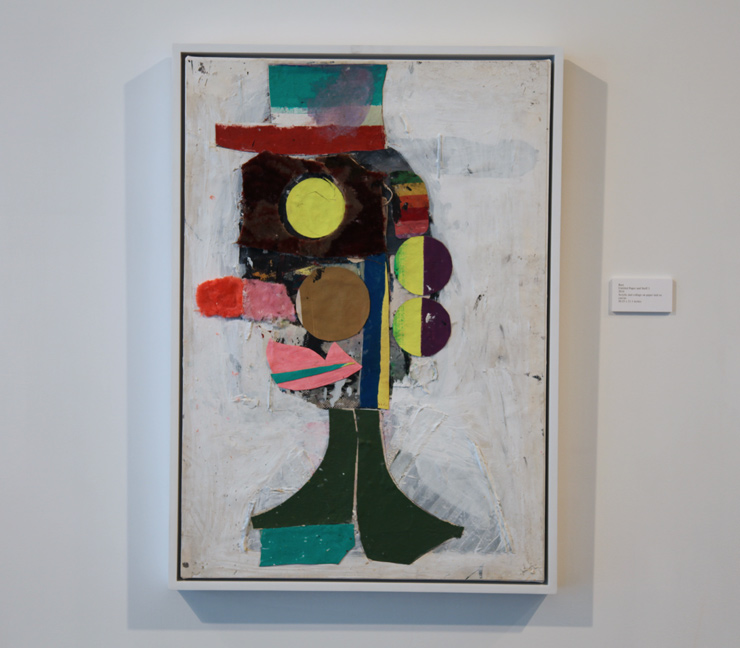 Insiders tell us that the brainy Coney chanticleer who blends many voices into one was not looking for a new exhibition, per se, but that he’s been prodigious in traversing new artistic neighborhoods and is glad to get the stuff out for people to see. You’ll be glad too.

In much the way that early-mid 2000s Street Art watchers became acquainted with his collaged pop-contorted figures and grocery store banner ad mocks, you’ll appreciate the opening up of space for new dialogue in his large canvasses, nearly balanced and reliably off kilter. 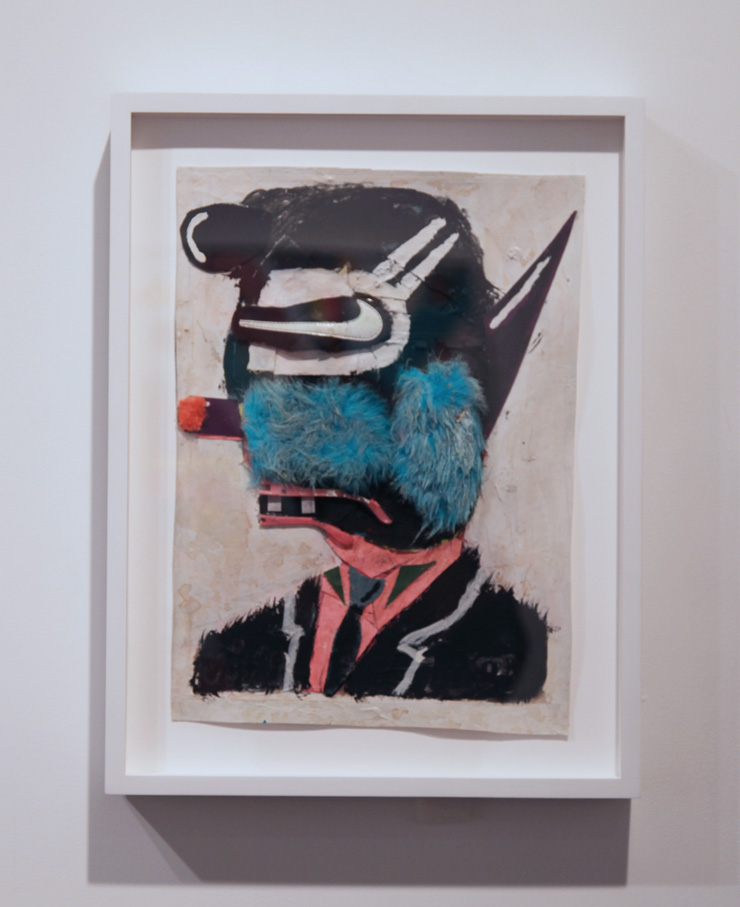 With new sculptural inventions, misplaced punctuations, rhapsodic vibrations and materials that hit the jackpot with plain joy and tactility, there is always a feeling that nothing is off limits; it’s just a matter of scrappily side-eye capturing an unwinding story or furry element as it flies by and attaching it with purpose. This is the street, a happy chaos full of character and wit. 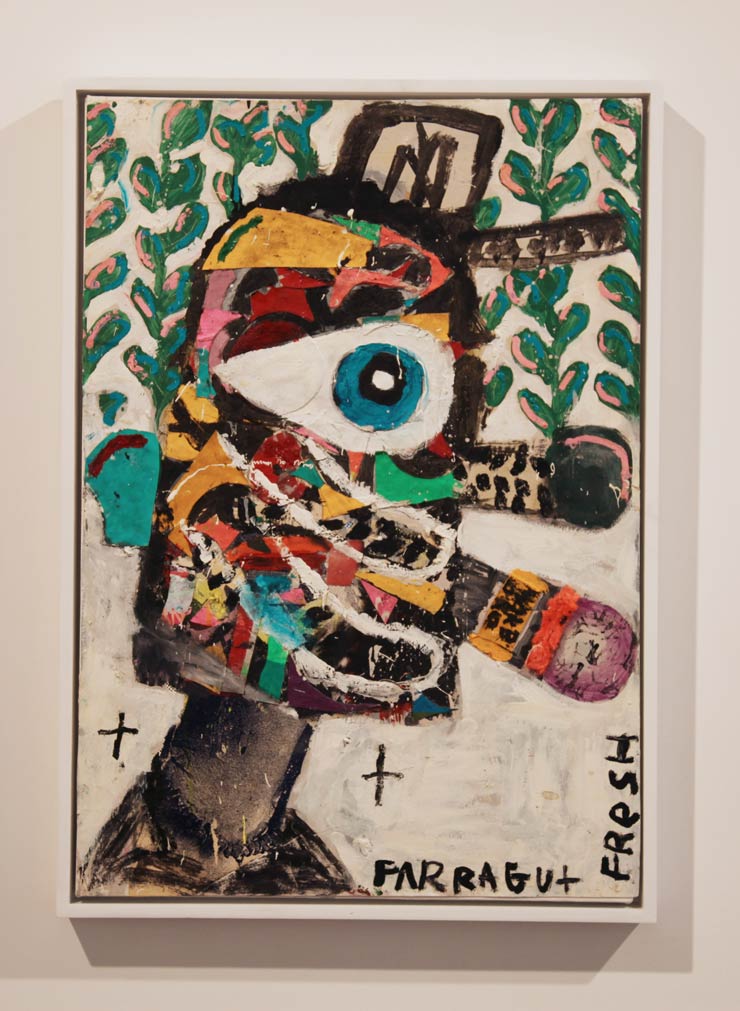 As if breathing air into the tight smaller pieces that are always densely rewarding, these newer larger roomy compositions allow him to stretch, and you think he’s going somewhere new, taking chances to discover. Of note for us is his technique of masking out the elements he decides are not necessary, a milky veiling that recalls “the buff” that wipes out graffiti and Street Art on city walls. In this case, it defines the composition and focuses the scene and feels like the artist is speaking directly to you.

While elements still peak through the partial opacity, these deliberate strokes are blotting out and re-defining with the resulting compositions as much a product of subtraction as addition and recombination – clarifying of what is vital and necessary. 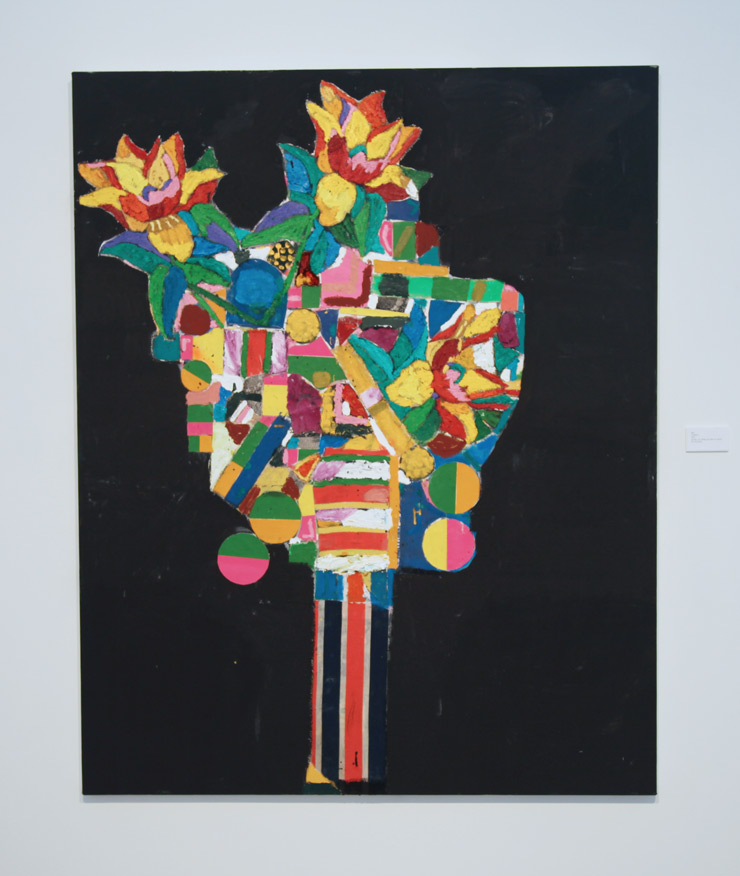 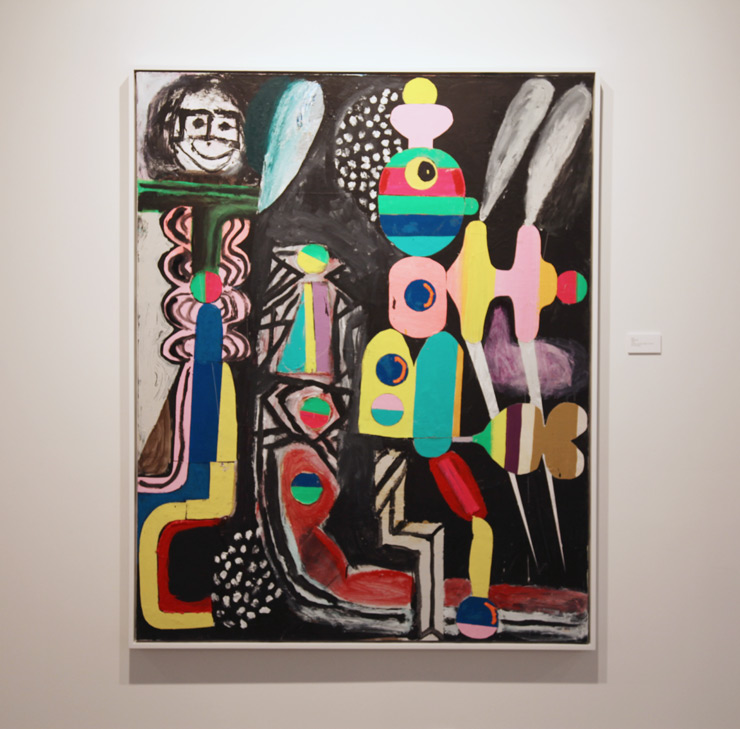 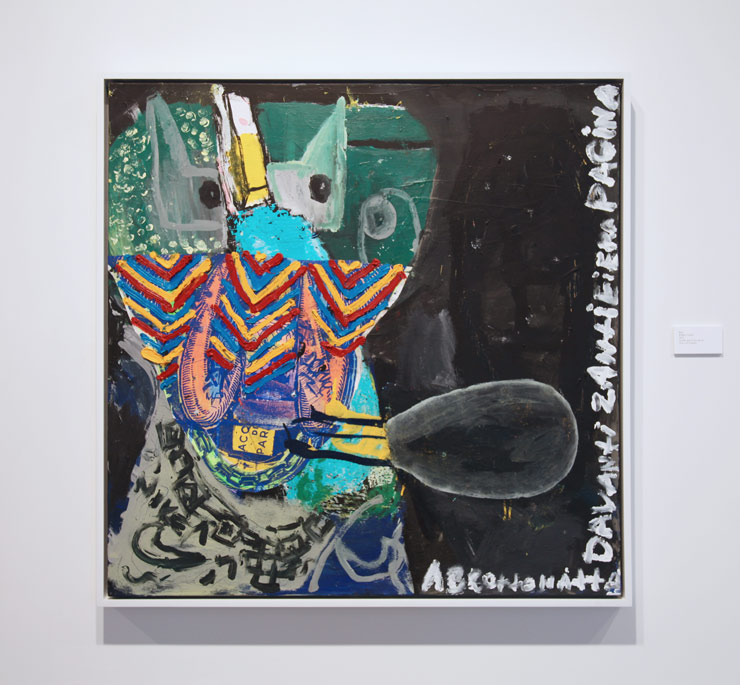 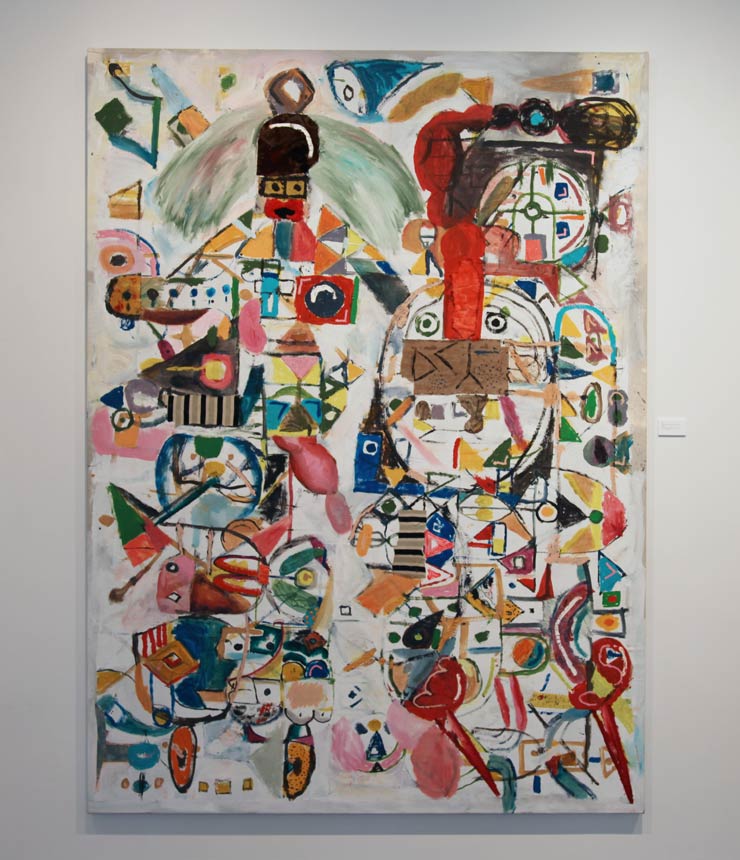 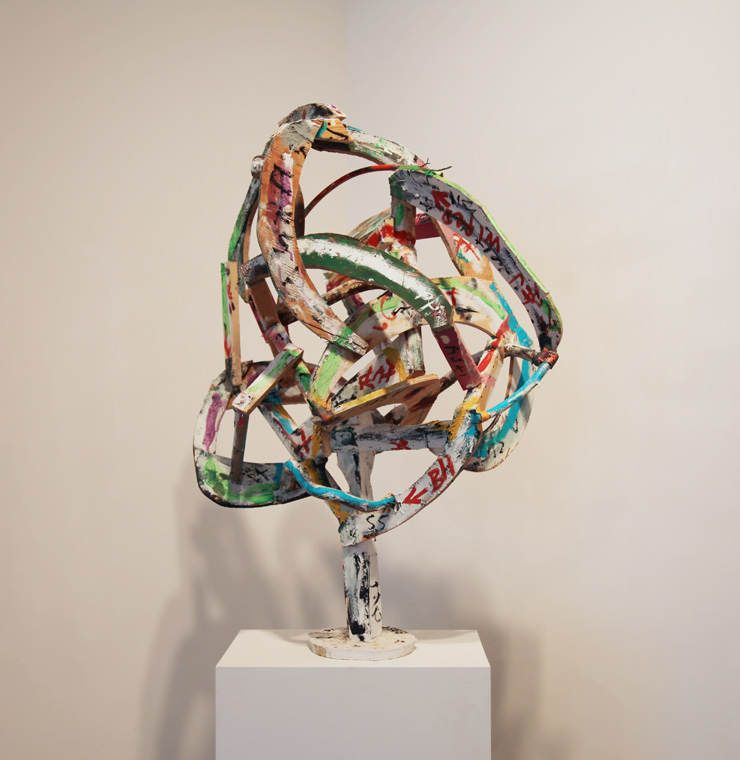 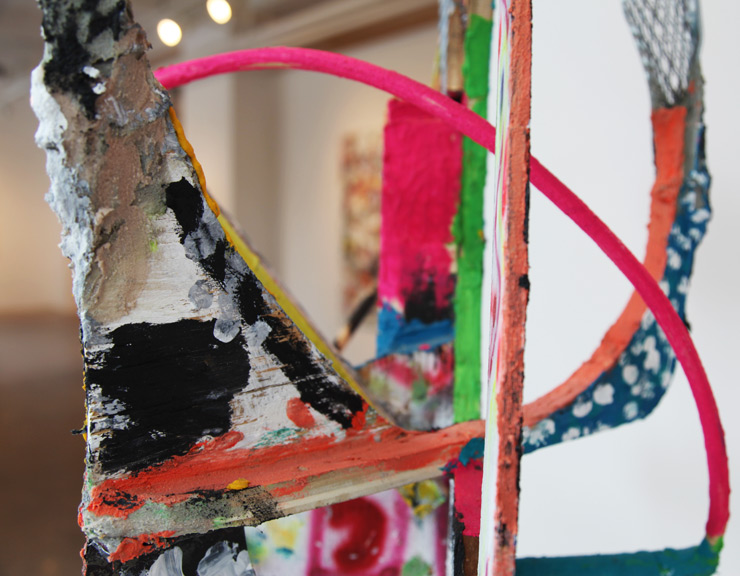 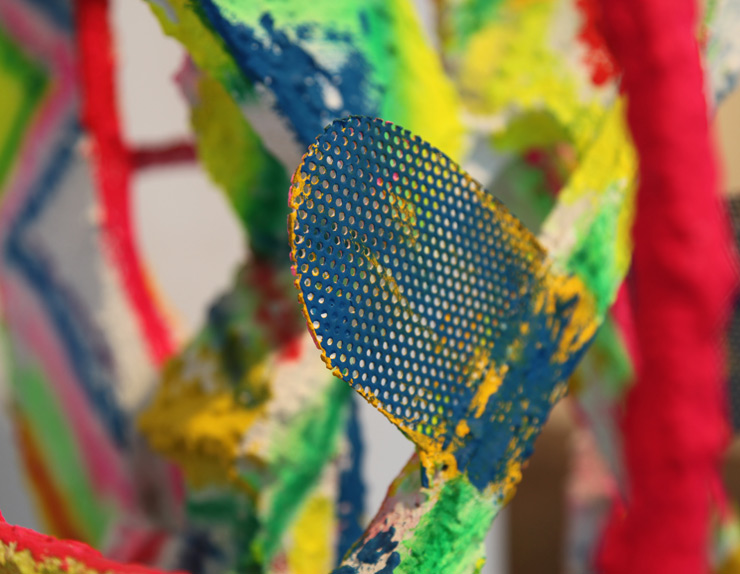 Sten & Lex & Gaia Portraiture at Brooklynite
Thanks to filmmaker Charles Le Brigand, who got special access to the artists as they prepare for their upcoming show at Brooklynite Gallery.
More Than Pigeons "Fly By Night" With Duke Riley in The Navy Yard
Pigeons have been a vital feature of New York’s skyline for decades, even centuries, particularly in neighborhoods like those in Brooklyn where thousands live in coops on the roofs of tall buildings, ...
Coney Art Walls Opens for the Mermaids! Update V
Dude/Dudette, it's Mermaid Parade Day - part of Coney's modern pop-carney cultural heritage. Rolling up Surf Avenue, turning right and coming back down the boardwalk, the three decade old event is bot...
BSA Images Of The Week: 04.17.16
Hillary Clinton announced in Brooklyn this week that she supports raising the minimum wage to $250,000 a speech while Bernie Sanders scoped around the showroom of a Danish furniture designer in th...
Happy New Year 2015 - BSA Readers Choice Top 10
Happy New Year to All! Thank you for inspiring us to do our best and to those of you who continue to support our personal art project / cultural examination, we extend our gratitude more than ever. ...
allouche Bäst Brooklyn new york Street Art