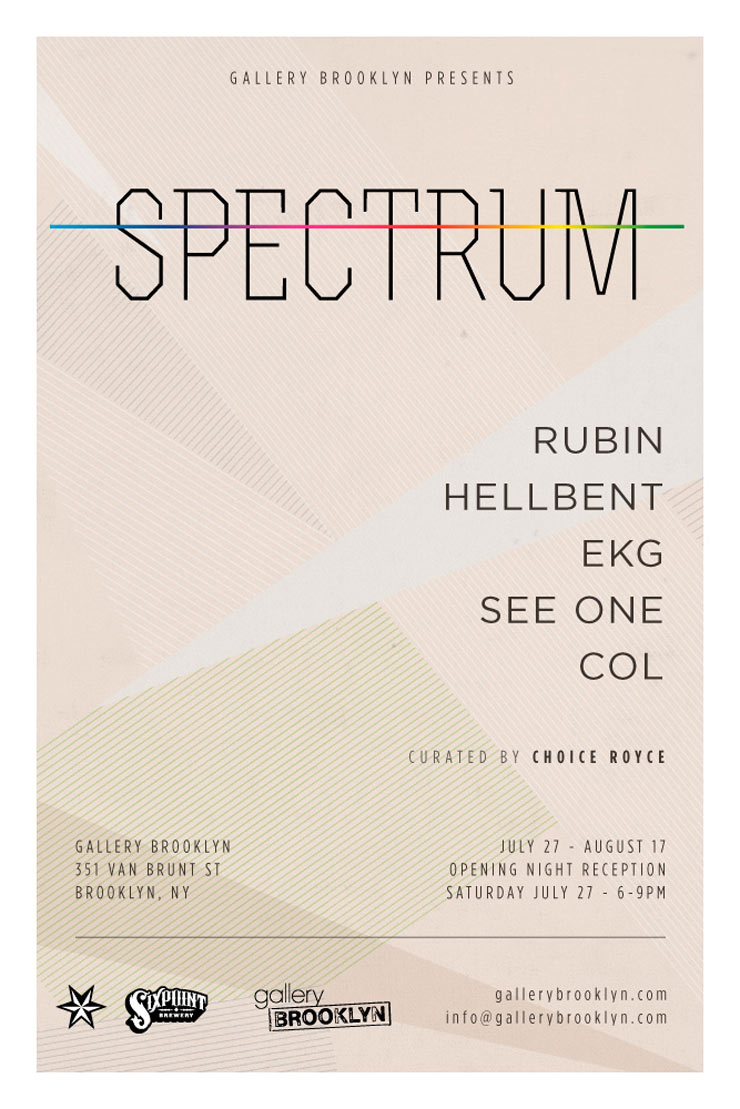 New York City, NY — On Saturday July 27, five street-oriented painters will exhibit together under the rubric of abstraction at Gallery Brooklyn in Red Hook. For these artists, abstraction as a formal aesthetic mode functions like a prism that fractures graffiti and street art into multiple facets creating a spectrum of mutation. This exhibition introduces original specimens of hybridization, re-creation, and singularity into the taxonomy of art on the streets and in the gallery.

NO BOUNDARIES BETWEEN GRAFFITI, STREET ART AND FINE ART

Each artist has created a unique, progressive body of work due to their allowance for porous boundaries between the visual vocabularies and techniques of graffiti, street art and fine art. Emphasizing their roots as graffiti writers, Rubin crafts wildstyle abstractions into graphic geometric deconstructions, whereas Col sculpts and weaves his into weighted three-dimensional shapes and flowing, entwining color fields. Graffiti artist See One does away with letterforms completely and creates tumultuous compositions of expressionistic techniques and sharp geometric shapes, a series dubbed “shards.” Hellbent utilizes stencils, a staple tool for street artists, to compose geometric compositions out of patterns that create an impression of a collage of lace and fabrics. EKG uses an “expressionistic pixilation” to compose a space from which to transmit a network of primitively rendered marks.

CURRENT WAVE OF INTEREST IN ABSTRACTION

Painters have struggled to capture pure visionary aesthetic forms since the turn of the twentieth century. This pilgrimage along the holy path of Abstraction achieved its most widely-recognized pinnacle of experimental success and international popularity in the mid-twentieth- century with Abstract Expressionism. As we pass into the twenty-first century, another wave of renewed activity and interest in abstraction has surged within the Graffiti and Street Art movements, as well as in the fine art community and institutions. Since 2010 Graffuturism.com, a living archive of Abstract and Progressive Graffiti, has been supporting established painters, inspiring developing ones, and attracting a growing interest from the public. Collectives that center around abstract and progressive graffiti have formed or become active again, such as Agents of Change, Transcend Collective, and Ikonoklast Movement. In 2011, the book Abstract Graffiti by Cedar Lewisohn and the ArtNews article Beyond Graffiti by Carolina Miranda were published. In 2012, MoMA opened their huge exhibition, Inventing Abstraction, a historical survey of the formative years from 1910-25. BrooklynStreetArt.com also presented Geometricks, curated by Hellbent, a large group exhibition of progressive graffiti and street art. This year the Guggenheim is currently displaying New Harmony, another survey of abstraction from 1919-1939. And through June 20th at The Hole gallery, Xstraction is the third iteration in a series of exhibits since 2008 that have focused on contemporary abstraction.

ABOUT THE CURATOR: CHOICE ROYCE

Lifelong Harlem resident Royce Bannon has been drawing his infamous monsters on the streets of NYC for over a decade. He recently was honored with inclusion in the city-wide art installation project Sing For Hope. This project involved painting one of 88 pianos, which were then installed around the five boroughs of NYC. Royce also currently writes a column for The Source magazine and has curated many other exhibitions including ones at The Woodward Gallery, powerHouse Arena, and 17Frost. [ Text by Daniel Feral ]