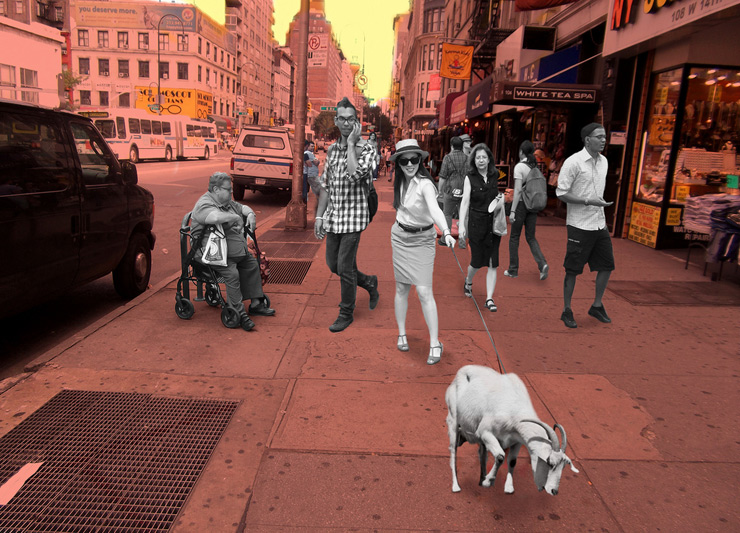 Art in Odd Places 2011: RITUAL features a wide variety of actions, participatory performances, theatrical presentations, public installations, and small and large-scale interventions all of which revolve around the concept of ritual.

A ritual is generally defined as a series of established actions that are carried out in private or public spaces, by individuals or by groups, for their spiritual, social, or political significance. Tapping into the everyday significance of these habits, the artists in AiOP 2011: RITUAL continuously integrate these practices in their work to explore a broad range of issues in contemporary life such as politics, culture, religious beliefs, notions of individuality and community, the endurance of the body and the fragility of life, the relationship with nature, among many others.

The collective character of the public setting offered by one of the busiest New York City arteries as the context for the festival has opened up the possibilities for the ritualistic interactions between artists, objects and people along 14th Street. The street’s daily environment will be transformed by secular and sacred activities and the relationship and reaction of the people attracted by the festival’s ephemeral events. A new sense of place and time, inherent to the concept of ritual, will confront passersby as they flow through the sidewalks, subway stations and storefronts during their everyday commutes or their spontaneous visits to the neighborhood.

The work will be performed and made available along the east-west corridor of 14th Street. The projects may be different each time as they are informed by the varying interpretations of the spectators and their nomadic qualities as they travel through the street. Artists creating pilgrimages will bring new importance to particular places, shrines will be created as sites of worship, and the public will witness miracles. Reenactments of past events based on the collections of oral history, the use of symbols, the exploration of traditions and myths, and the use of magic and astrology are key to some of the artists’ work. Another group of artists create impermanent situations that are reminiscent of childhood and familiar events; worldly rituals that refer to identity politics, queer culture, dominance and submission, are experienced as organic and transcendental happenings.

The use of the body is central to artists that touch upon life and death, real and spiritual borders, love affairs, human relationships and the connection to nature. Through music and dance, walks, palm reading and the use of masks, wigs, and spraying perfumes and scattering ashes, some artists evoke mundane obsessions, venerate popular icons and reject and criticize certain aspects of today’s social values.

From kissing trees to making wishes, from healing souls to dreaming in a park, from washing feet to praying to the sky, the artists transcend the borders of the everyday space. By ritualizing actions and highlighting the different realities that coexist, the projects of AiOP 2011: RITUAL manipulate impressions, satisfy emotions, create effects, and most importantly transform – not only the surroundings in which they position their work, but also the audiences they engage, and who will become fundamental to the ritual itself.

For a full schedule of events, artists projects and venues please visit AiOP site below: